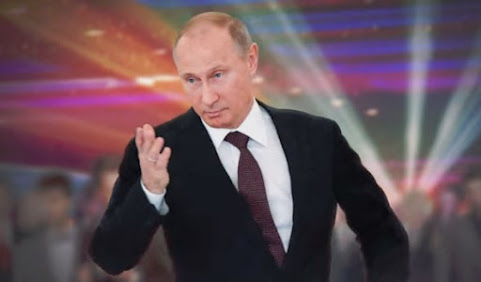 Credit where it's due . . . The Russian dictator dancing is a pretty good visual and puts partisan political chatter in the proper perspective.

Surprisingly, the Congressman was kinda slow to come to this conclusion over the latest news cycle but his commentary merits consideration if only because it offers a big picture peek at the local discourse among the former KCMO mayor's constituents.

He predicted other countries would question our democracy’s vitality, particularly the Russian government and President Vladimir Putin.

“Some of us like myself have been saying that for the last four years," Cleaver said. "We are opening the door for our enemies to use what we are experiencing in the United States as a testimony to what they’ve been saying. And that is you can’t trust the United States, they are not some pristine democratic stronghold.”

Cleaver said the United States is being mocked by its enemies and called on Trump to quit.

“If Donald Trump loved the United States, if he really loved this country, he would spare us the horror of the next 13 days by quitting and going to Mar-a-Lago and never stepping out in public," Cleaver said.

Bringing out the classics! Thank you Congressman!

If ifs and buts were candy and nuts, we'd all have a merry Christmas.

The cleave is batshit crazy, he needs to go ahead and resign immediately.

Shut up and pay your taxes Manny!

Beijing Biden, BLM and Antifa will bring peace to the world on Jan. 21.


And I demand Cleave resign! This is who is behind the voter fraud. US data was forwarded to Germany to Rome where it was changed and sent back to the US. Barack Obama was the person behind it together with the Italian defense contractor. MI6 and the CIA are also involved. Forget Cleaver he has no clue what is even going on. You know you gotta wonder about an idiot that says AMEN and awomen. Again tonight on live chat he was being mad fun of.

Think Trump even knows who Cleaver is? Pelosi doesn’t even know Cleaver. Cleaver needs to shut his mouth. Awomen

Trump isn't going to resign. He doesn't have enough integrity to do something hard, just because it's the right thing to do.

Trump will not be impeached. It would take too long, & we have a country to rebuild.

Trump will not be removed by the 25th Amendment. Mike Pence doesn't have enough courage to act like a man.


The best way to deal with him is to ignore him, & forget him:

WTF is wrong with these retards, they have the house, senate, media, corporations, big tech now the white house...they will not stop until there is no dissent to their bolshevik revolution and we are all slaves. Thanks brain washed leftists.

Barack and Mike Obama hate America more than anyone.

^^^ Nope. Trumpers hate America the most.

Barry's wife has a penis.

Spare us the fearmongering hyperbole.

Trump organized, & instigated, an assault against Our Capitol. He honestly seemed to believe that Mike Pence could somehow declare that Donald Trump had won the election.

He's just trying to deflect from his world-class asshole prayer screw up this week. I'm sure God had a good laugh about it.

If China and Russia is dancing it's because Sloppy Joe will restore business as usual and Hunter can go back to sexually sniffing young Chinese girls and his niece.

Alisha served four tours in Iraq and the Capitol Secret Police shot her like a dog. That is what the Marxist Democrat rats in Washington D.C. think of veterans.

Let the politicians fight their own wars in the future.

With the fraudulent election via mail-in ballots, the United States has become a Communist Authoritarian government. The politicians ran and hid like the rats yesterday. Just like Joe Biden did all year.

Hey Cleaver, when you steal an election with fraudulent mail-in ballots that is what ruins a Democracy.

American Patriots detest you, your Party's love of Communism and your hatred of American values.

You stole an election, burned and looted with your ANTIFA and BLM thugs, and blamed Trump for your Communist Chinese buddies unleashing corona virus that shut down our economy.

Pay your property taxes Cleaver before you start bitching about other people.

You are absolutely right Cleaver, the United States is no longer a pristine Democracy after this year's election fraud.

Traitorous, violent, law-breaking MAGATS need to be rounded up and provided the maximum penalty for sedition and insurrection.

I have a friend who lives in Moscow. The residents there are laughing over yesterday's incident. They do not have that civil unrest in Russia. They think we are wimps. Its sad.

When the republicans started protesting is what scares Russia, they know we aren’t messing around when it comes to protecting our freedoms and our country.

The dimwits will crawl under a rock when they hear the Russians come knocking but never fear, we’ll save our country like we always do even if it means saving you worthless crybaby little bitches, it’s what we do, save people and our way of life for our children’s future.

In Russia, they got no freedom to protest, they get sent to labor camps if they don’t get murdered first besides, nobody gives a shit about Russia and if you do you’re an idiot.

920 i see your sarcasm, but where will chyna Joe's first war be, dems need to get the war bucks started again and create new waves of refugees.

"The best way to deal with him is to ignore him, & forget him"

No. He needs to be impeached and convicted, even if it happens after he leaves office. That way he can never run for office again.

ignore and forget would be cheaper.

Russia dances even more like Bull when Cleavtoris and his dipdouches bring Awoman and AMEN laws. Let's be truthful, his ignorance of simple items opens up Russia for the infection.

If Cleaver truly loved America he would pay off his SBA carwash loan.

12:52. You must mean China. The old Soviet Union sent political dissidents to forced labor camps, not modern Russia. Something significant happened back in 1991 that a lot of people in the west seemed to have missed. What was it? Oh yeah, the Soviet Union collapsed.

If anyone needs to step down its Rep Cleaver. He has done nothing for his district in all these looooong years.

^^^^ yeah, and it was replaced by another dictatorship. Same story, different day.

Folks, go back to cleaver wanting a pardon for black panthers relative.

Cleaver knows what really happened to leon Jordan founder of freedom inc allegedly and was for the puppet of james b. Nutter who allegedly controlled election fraud and rev. Emmanuel cleaver for years. Cleavers church st. James paseo came under scrutiny about millions of dollars when they rebuilt church and sidewalks. St. James paseo church allegedly received stimulus cash...

Cleaver was also involved with swope park health center allegedly and the crooks back in the day when frank ellis ceo
And mark Bryant scammed surrounding property owners and wouldnt pay them fair market value and allegedly cheated folks having them wait years to be paid. Money allegedly divereted.

Sad and disguisting to see folks like him used to front for bigger crooks to scam hard working folks.

Dinosaur politician whose been in the tank so long their believing their own lies.

And as for the election being stolen it was.. cleaver knows very well how these things happen.
Cleaver may have gotten a bill gates nano chip vaccine and being controlled now from 5g to do more ignorant things.

If you don't think Putin isn't celebrating the chaos that Trump has brought, you're a fucking retard. End stop.

Our existential enemy is China and they are dancing there over the steal of the election and the imminent installation of their puppet, Beijing Biden.