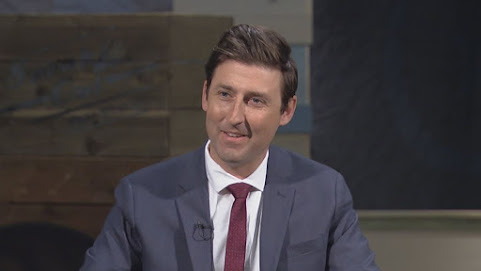 Eric Bunch has been one of the most sympathetic white dude voices to the Black Lives Matter movement on the council and he even aligned himself with anti-police protesters campaign out on the city hall steps last year.

And while he hasn't really done much to address rising crime in his own district . . .

Credit where it's due, it's a bold move that also has the benefit of distracting from worsening budget and infrastructure problems by foisting blame for a deteriorating municipal crisis on law enforcement.

Bunch cited the fact that Kansas City police still don’t have functioning body cameras as one reason for his suggested resignation.

Bunch also alleged Smith has done “virtually nothing” to implement Mayor Quinton Lucas’s public safety reform initiatives in a response to updates from Tuesday’s KCPD Board of Police Commissioners meeting in which Smith said body cameras are “still being looked at.”

He has also been very consistent with his criticisms. You should give him credit for that.

has he done anything else but criticize?

Well, there are the bike lanes on Armour. Does that count?


What's with this demand crap. We the people demand this guy get out with a shovel and clean the bike lanes when it snows. BTW Does this guy ever bath he looks really dirty.

DO you really want Eric Bunch in charge of the police?

Since Bunch has done nothing for kcmo I demand that he resign.

I've got to give him some credit for bringing up the body cams. We haven't heard about that since April. No one has even announced how much cash they will need for the video storage.


Did Eric Bunch get a deal on suits at K-Mart before they went out of business?

KCPD are still waiting for the funding from the city council for 1500 police officers they were promised in 1970. This was funded by the first 1/2 percent of the earnings tax. Some how the city council can find money for bike lanes and other wasteful spending but fails on how to fund essential city service. Maybe Councilman Bunch should resign.

This man is a moron.

I don't want Eric Bunch in charge of anything.

What exactly has eric panties in a bunch done to stop the murderous blacks from killing everybody? Besides pretend he’s all woke and upset about black people and their perceived injustices?

I demand that he resign and not just because he hasn’t done anything to stop the murders, he also needs to go because he’s done nothing to help the cities real needs like infrastructure, lower water bills and improve all city services, he’s a worthless piece of shit, he’s not an asset to the city, he’s dragging the city into the never ending black hole of despair.

Put Eric in time out he does not understand law and order.

Bunch has the right to raise the issue but what about people defending the police. If you look at the whole city council they are all hostile to law enforcement, is it any wonder why the crime rate is so high? Support the police not the "defund" protesters.

One of the worst councilmen in KC history, should have never been elected.

I get that he feels sympathetic to protesters but he should think about the community. What are we going to do until there is a new police chief? the murders keep piling up. It's unfair to KC to make this just a political debate. We should be talking about public safety.

He's just out to grab headlines, likes and shares. He doesn't really care about anything but his own career.

The silent majority needs to wake up. We just had an election stolen. The last place we may still be able to make a stand for sanity and not mob rule is on the local level.

Eric "Panties In A" Bunch needs to stop with the horseshit.

Just another white woman sjw virtue signaling for likes. She needs a good hard fucking to bring her back in line.

If this douche had his way The Plaza and Westport would of been a pile of ashes last July.

Eric Bunch is Josh Hawley without the sneaky little rodent-like cunning.
Has anyone ever seen the two of them in the same room together?

Remember all this crap when the next election rolls around!

This idiot is the personification of the term "wigger".....

Bunch should resign. He has done nothing to fix crime in the city
and he voted himself a big raise while people are struggling.
The Kansas City council makes twice as much as the St.Louis council!

OK. I actually see little police brutality in KC, maybe some. But when you look at what the cops are up against , I think they are doing a great job. Blame the police on the urban murders??? You have to be kidding.

Actually, body cameras for the KCPD are people like Bunch's worst nightmare.
The videos will then show the world the behavior of the "victims" that caused the police to have to react they way they have.
And anyone who has ever ridden with the police, particularly in East Patrol, know very well what they are confronted with each and every day.
Bunch is a self-serving uninformed doofus just like most of the rest of the KCMO electeds and doesn't even make any effort to learn enough about issues to make any serious recommendations.
Be careful what you wish for.

As long as he had showered, I’d probably still blow him. But I’m with 9:04 about the suit.

This dude is my councilman. He's kind of a cross between Boris Johnson and Wally Cox. He had a very narrow victory which matches his mind.

How about we drop all the demands by this Jerk and have him resign first. He and his "special" group have practically destroyed many roads for the 99.9% of vehicles that use roads in favor of the bikes. Time to stop accommodating KC and remove this D-bag from office.

Idiots like Bunch complain and stop the police from doing their job because of the virtue signaling. When the crime rate rises these idiots complain again. Hey Bunch it is your fault moron for the crime rate rising due to you constantly insulting, demonizing and berating the police. You can't have both ways when it comes to law enforcement it isn't a lifestyle it is the law!

CM Bunch just isn't very smart. He always just reacts in a self important way to elevate his profile. He only won his council seat by a narrow margin and has been running for reelection ever since. Never an original idea and a legacy of screwing up the streets with poorly planned bike lanes. KC can do better!