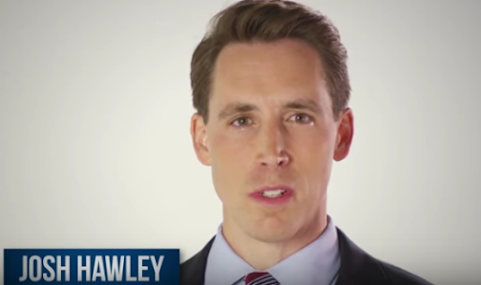 Critics of Senator Hawley shouldn't put too much hope in these numbers but they're good to share with locals who don't know much about how easily political data can be manipulated.

One in five Republicans surveyed were in favor of Hawley’s resignation, while a majority of self-identified independents and a supermajority of Democrats were also in favor.

Meanwhile, MSM and social media denizen continue hammering away at the politico who might be patiently waiting for Parler to come back online.

Well, there go those president aspirations. Dude is toxic.

Progressives all are homosexuals, thus have no relevant opinion.

Hang tough. Don't let the bastards pull you down.

^^^ Claiming that anyone who holds different opinions than oneself is the surest sign that the claimant is a closeted cock-sucker!

And yet Hawley is going down all on his own. Weird.

And yet Democrats are in the superminority. Weird.

Seriously, the Daily Beast is so full of shit, it is almost like reading the Babylon Bee. They are a running joke.

Hawley - like Trump not only has not lost support, he has picked up momentum with his base and pulled in some Independents.

This attempt (Very successful to this point) at censorship and disinformation is forcing a coalescing of those on the right into a far more radical position. In my opinion, while the short term benefits of information suppression and disinformation might bring smiles to the faces of the D﻿﻿﻿﻿﻿﻿卐﻿﻿﻿﻿﻿﻿M﻿﻿﻿﻿﻿﻿☭﻿﻿﻿﻿﻿﻿CRAT﻿﻿﻿s, it will blow back hard on them in the future.

^^Why aren't you in DC you fucking pussy. Stop playing fantasy on here and go die for your convictions you coward Boomer.

Another poll just like the endless media "reporting" that start with "some people say", "sources indicate", or "many experts believe".
Nothing but attempts to make someone's personal opinion seem to be more widespread and credible than it really is.
Just remember that Hillary had a lock on the 2016 election.

10:51 Fuck off you anonymous pussy psychotic piece of shit.

I am not going anywhere and you are going to sit in your own shit, read my comments and gnash what few teeth you have for the foreseeable future and like it.

The poll-sampling size was a massive 571 likely voters. That's small in and of itself for a reasonable degree of accuracy. Further, chances are good they only polled in specific areas of St. Louis, KC, and Columbia.

That's how polling works these days, and why polls often show wildly divergent numbers. To achieve the result you want, you just use available demographic data (FB and Google will gladly sell you some) and target accordingly.

Hawley went from hero to zero in less than eight hours. That may be a record.

Chuck really doesn't believe any of the shit he spews on here. He's only playing right-wing terrorist on the blog. It's the only way he can get people to interact with him.

^^^^I wondered about that. No sane person could believe that shit. I figured he was just having fun triggering people in between Matlock episodes.

Hawley will win again. This has only endeared him with living voters.

Hawley will win in a landslide during his next election.

Jason Kander is a douchebag.

What we know for sure is that Josh would rather rule in a dictatorship than serve in a democracy. His sedition will not be forgotten or forgiven.

The Demoncraps are scared sh*tless of Republicans with big balls. They want to put Trump in his grave so he can't run again. They are out to destroy anyone, any way. It doesn't matter what the truth is to Libtards.

The Demoncraps spied on the Trump campaign illegally. Now they want to act like they hold the moral high ground. Worthless pukes.

Trump's can of Pringles said...

...if your coup works....what will happen to someone who voted for Biden?
... or someone perceived as 'a liberal"?
should we fear for our lives, perhaps?

"Hawley will win again. This has only endeared him with living voters."

And yet to win reelection he'll need a lot of support from the dead ones as well. Weird.

Tony's first two words in the lede give a clue not the read the article "Progressive survey". Hypocrites extraordinaire.

Hawley improved his chances by standing up to the most violent and murderous party this country has ever seen.

Fun fact; does everybody know that Nancy peebrain has been involved in over half of the impeachment’s this country has had?

Freedom isn’t free, the saying goes. And neither is the opposite of freedom, which for today’s purpose, is the impeachment of President Donald Trump. Counting legal fees for a slew of legal teams, experts, time, maintenance, and constant deliveries of Chardonnay, you and I, Mr. and Mrs. Taxpayer, are looking at about 2 and a half billion dollars. Hope your boss can give you a raise.

Apparently cost and the American taxpayer don’t matter when it comes to psycho nancy getting her way, she took money from old people barely getting by because she hates anybody that doesn’t do what she wants.

I think the real problem is nobody can understand the stuttering bitch who can’t remember what she’s talking about half the time!

^^^If you Republicans don"t like the costs of Impeachmentd, try obeying the Law! FUN FACT #3!

Jason Kander is still a douchebag.

It's all China Bidet's fault. We must start impeachment proceedings at once!

You poor dimwits must hate living in Missouri, where your opinions and votes nationally aren't worth spit. You do run KC, but all you've done is reduce it to a shithole. You better hope E-tax passes, or you're even gonna be more fucked. Be sure to buy Sly's book if someone will spot you the cash.

^^OK Boomer. Make sure you've stolen enough copper this month to pay the rent on the trailer in Frogville Cletus. You ran through all the meth money last month contributing to the "Stop the Steal" campaign. Handies at the bus station glory hole can only get you so far. Get to work simp.


Not True Hawley is hated only by the CCP party, because he is against the communist party aka democrats. I want to thank every democrat out there who voted for communism you just gave away the United States of America. We are now a communist country you can't deny what you have just witnessed. The democrats just pulled everything the CCP does. You black democrats think you had it bad before, you haven't seen anything yet and I blame you people most of all because you are extremely ignorant.

MEMO:
FROM: JOSH HAWLEY
TO: PROGRESSIVES

My senator Josh Hawley will easily be re-elected. Trump easily won Missouri and so will Josh. I will be collecting all the mail in ballots I can get and send them in for Josh which I learned from the democrats.

^^Except you won’t because you’re fat stupid and lazy.

Whew, Kamala, do something about that smell. said...

It is strongly recommended one should ignore what he/she/it posts as it may result in permanent brain damage, which would be evidenced by voting dimocrapic.

The impeachment process against chyna joe starts on Jan 21st, some brilliant patriot from Georgia gets it going!

Chyna joe will resign before going through an impeachment! Easy peasy!

So what your saying is 4 out of 5 Republicans support Hawley. Sounds good to me.

Hawleys nose job looks bad. He is a plastic person.

Do NOT support Rockhurst High School - they taught Hawley his un-american ways!

Ignore our election and claim it was faked? Without any proof? Really?!