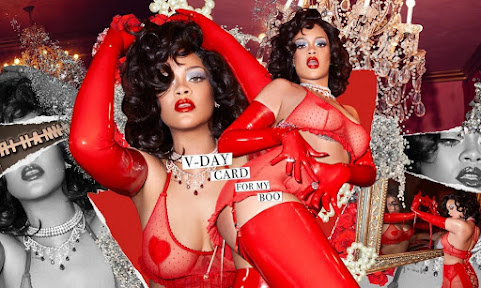 Tonight we revisit a lingerie V-Day power play from hottie Rihanna along with sharing a few worthwhile times from pop culture, community news and top headlines.

LEE'S SUMMIT, Mo. - Gladys Bratton sees the COVID-19 vaccine as the only way her whole family can be under one roof again. "We'd be able to get out of the house and not be fearful that we're going to get sick," Bratton said.

'Lean into it': Lenexa firefighter honored for answering call to adopt 2 girls in horrific situation

Hide Transcript Show Transcript EB D BOY'S BIRTHDAY CELEBRATION. IT WAS THE CALL THAT WOULD FOREVER CHANGE A LOCAL FIREFIGHTER JET BELIEVES DIVINE INTERVENTION. TO ADOPT TWO YOUNG GIRLS IN A HORRIFIC SITUATION OUR ROB HUGHES EXPLAINS THE HONOR HE JUST RECEIVED AND HIS MESSAGE FOR US ALL.

LEN: KANSAS CITY CHIEFS GET BACK TO WORK THIS WEEK AS THEY PREPARE FOR THE BUFFALO BILLS ON SUNDAY. WILL PATRICK MAHOMES BE READY? THE SUPER BOWL MVP LEFT THE GAME ON SUNDAY AFTER THIS TACKLE. HE HAS ENTERED THE NFL'S CONCUSSION PROTOCOL.

President Donald Trump has decided to pardon his former chief strategist Steve Bannon, in a last-minute decision made only hours before he is scheduled to depart the White House for a final time.

Sen. Lindsey Graham, R-S.C., is fighting efforts to convict President Trump in the Senate after he was impeached for a second time by the House of Representatives, and Senate Majority Leader Mitch McConnell, R-Ky., should do the same, Graham told Fox News' "Hannity" Tuesday.

Trump won't hand Biden the nuclear football. Here's how the handoff will happen.

When he is sworn in Wednesday, President-elect Joe Biden will get the nuclear "football" - an oddly shaped 45-pound briefcase that is always at the president's command to control the country's massive nuclear arsenal. A military aide carrying the "football" remains physically close to the president, ready to carry out the well-rehearsed choreography of command and control.

Vice President Pence is not expected to attend a send-off for President Trump at Joint Base Andrews on Wednesday, joining a host of other GOP officials who have declined to see the president off for his official departure from the White House.

KANSAS CITY, Mo. - Ritchie Cherry's entire life has been about beating someone to the punch. He used to be a professional boxer. "It was an outlet for me. I didn't get in the ring to make money," he said. "I got into the ring to escape."

KANSAS CITY, Mo. - Kansas City restaurants are seeing the positive effects of KC Restaurant Week . The 10-day-long event wrapped up on Jan. 17. The event included hundreds of restaurants from around the Kansas City metro with dine-in, curbside and delivery options. Emmanuel Langlade owner of Aixois Bistro said the event provided some much-needed business.

Union Station wants to help you celebrate the Chiefs' win and the team going to the AFC Championship this weekend.From now until 10 p.m.

HERE is the song of the day and this is the OPEN THREAD for right now.

I'll miss Trump. He was the finest president the United States ever had.


So, exactly, what crime is Bannon being pardoned for.

It's sad that you're so easily amused.

I did not make the comment at 12:54 or 12:48. Josh Hawley will be the greatest president of the US in history