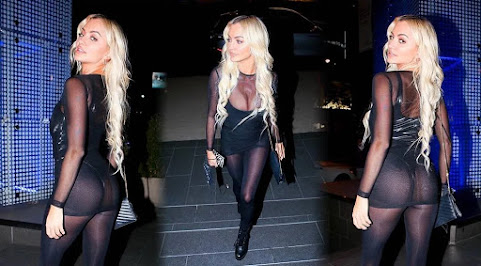 We start with a quick peek of hottie Lindsey on the move after dark as we check pop culture, community news and top headlines.

KANSAS CITY, Mo. - A new year doesn't mean things are getting easier for struggling small businesses in the Kansas City metro. Kim Moffitt, owner of Twin City Tavern, said the worst still may be yet to come. "Truly without another PPP round I don't know how much longer we'll make it," Moffitt said.

KANSAS CITY, Mo. - Missouri State Senator Tony Luetkemeyer (R-Parkville) is pushing new legislation to criminalize the so-called "doxing" of law enforcement officers. "What my legislation does, very simply, is it will make somebody who intends to intimidate or harass a police officer, by disclosing their private information, it will make that conduct a felony offense," Luetkemeyer told FOX4.

Is Kansas last in distributing the COVID-19 vaccine? The state says the data is misleading

Concern and criticism have increased in recent days after data from the Centers for Disease Control and Prevention, among other sources, has pegged Kansas as last in the nation for COVID-19 vaccination rates. But state officials say the reporting system is merely experiencing a lag in getting out up-to-date numbers, saying that training for providers on using the reporting system was lacking.

APARTMENTS. HALEY: WATER DRAINED DOWN. IS COMING OUT OF THE ELECTRICAL OUTLETS. HALEY: THIS WAS HIS UNIT. THE SAME PLACE HE HAS LIVED FOR MORE THAN A DECADE. I GRABBED WHAT I COULD. HALEY: THE FLOOD CAME GUSHING FROM A BROKEN WATER HEATER UPSTAIRS.

Some health care experts in Kansas City consider the new coronavirus vaccines a light at the end of the tunnel, but many in the African American community may need more convincing. That includes family members of medical professionals like Dr. Nevada Lee, who was surprised and scared by the skepticism some of her loved ones expressed about getting the vaccine.

Lindsey Pelas Has A Surprising Way Of Dealing With Trolls - Exclusive


Georgia On My Mind

By Nomia Iqbal BBC News, Georgia The US is facing another huge election - one that could define how much new president Joe Biden can get done in his first term. More than 100 people are gathered in the grey and damp cold in Stone Mountain.

In his ongoing quest to overturn the November election, President Trump has demanded total loyalty of his fellow Republicans around the country, but nowhere more dramatically than Georgia where the last thing Republicans needed was an intra-party fight heading into its competitive U.S. Senate runoffs on Tuesday.

The US capital has mobilised the National Guard ahead of planned protests by Donald Trump supporters in the lead-up to the congressional vote affirming Joe Biden's election victory. Trump's supporters are planning to rally on Tuesday and Wednesday, seeking to bolster the president's unproven claims of widespread voter fraud.

Larry King, 87, is OUT of ICU after being hospitalized with COVID

The broadcast legend, 87, is understood to have been moved from the intensive care unit at Cedars-Sinai Medical Center in Los Angeles on Sunday He is thought to have caught the virus from a health worker visiting his home One of his sons has also tested positive, a family source

As COVID-19, also known as the coronavirus, continues to spread throughout the U.S., few industries are being hit quite like the restaurant industry. One of the ways many restaurants are trying to adapt is by offering expanded options for delivery, takeout and curbside pickup.

Increasing sunshine after lunch today with much warmer temperatures through midweek Rain and/or snow is possible Wednesday to Thursday Cold and cloudy through next weekend KANSAS CITY'S MOST ACCURATE FORECAST Monday: The clouds will gradually clear by the afternoon. Temperatures warm up and the wind picks up. Wind: SW to NW 10-20 mph.

Justin Bieber - Anyone is the song of the day and this is the OPEN THREAD for right now.

Thanks Tony for food post. Those are some tasty looking dishes. I'm on a whiskey fast this morning. Damn Chycoms. Coaches is no longer on 103rd. They moved to College and Metcalf. And if you didn't know the owner was murdered by a black racists serial killer. Regarding the purposed Doxing law. If it is public information, then it's public information. That being said, people would shit bricks if they knew what companies are selling information about you. Legal stuff and not-so legal stuff. For a couple few of bit of a bitcoin you could get where Stacey bought those fancy urban freedom fighter boots, if she used a credit card or she texted her comrades if they made her butt look big. Welcome to 2021, taco Tuesday.

^^^I want to know what brand of TP Abrams buys to wipe her big fat ass.

I can’t tell the difference between these Instagram hoes and a lady boy.

Thanks, Tony - at least we got four days of this blog without that ugly fat-assed Lindsey showing up.

on the kansas side i do know that the veterans administration is in the process of making appointments for veterans 75 years of age and older now.

that is veterans 75 or older only - no spouses, other family members, etc.

i'll assume for the time being that their medical personnel have already been given the first dose - not sure about that.

The vaccination confusion and incompetence is nationwide, do if Kansas is number fifty per capita, they're really number one nationwide in demonstrating incompetence and lack of preparedness.

Wichita is better organized than Johnson County. They have a web site.

The Kansas Heath Department has spent the last how many months berating Kansans for not doing what they are told, yet when the time comes for them to perform they are completely unprepared. This is typical left-wing incompetence and buffoonery, covered with a big helping of unearned self-aggrandizement just to make it sting all the more.

They're offering excuses but they should be fired.

Well, even if you don't like Bollier's politics, she would make a great Kansas vaccine czar.

How about it, Governor Kelly?

The health positions are sinecures in normal times and mediocrity is the rule.

When there's a pandemic, you need somebody not mediocre, somebody smart and savvy.

That goes for Kansas, Johnson County, and Kansas City.

Bollier needs to go back to selling chocolate and shilling for Planned Parenthood.

What has Kelly done for Kansas?

Bollier's fondue is the best, but we don't want to support radicals and ambitious opportunists.

re the doxxing law. first comment is right they are public info. so the law needs to be narrow so not used by police to harass people like journalists. also if i take a picture of a cop car parked in front of a house is that doxxing? like the take home car so you don't have to buy gas you can stick your commute on the taxpayers.

5:00. This is a pandemic that never was except in the minds of a public health system run by mediocrities who desperately wanted to feel relevant for once. All we had were mistakes, overreactions, and outright lies to keep the farce going as long as possible. We would be better off without a public health system empowered to address communicable diseases as people can do a better job just taking care of themselves.