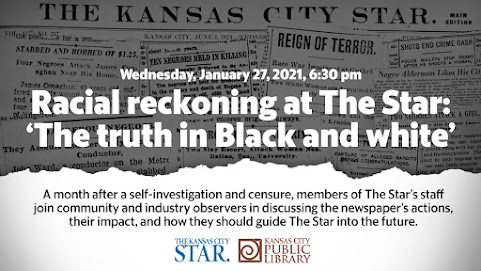 Recently, the Kansas City Star offered a shameless spate of navel-gazing coverage that earned widespread celebration among journalists and nobody else.

An apology from the Star for a legacy of racism earned coverage across the globe and from nearly every major American media outlet.

Never mind the reaction from the community was underwhelming and several African-American journalists and leaders simply rejected the overture outright.

THE KANSAS CITY STAR 'RACIAL RECKONING' CONVERSATION EARNED ONLY A HANDFUL OF WITNESSES!!!!

Online stats can be rough and it's hard to predict what will resonate on Youtube. For instance and just for context regarding the global video sharing website, the iconic clip of a cat playing the keyboard has garnered 61 MILLION views and counting . . . And that cat has been dead for years.

The only thing we know for sure is that the racial drama from Kansas City's so-called paper of record hosted fewer people than most bus stops on a cold January night. To be fair, they garnered a bigger crowd than the turn out to protest in support of Prez Trump at state capitols.

A screenshot for evidence . . .

Don't take TKC's word for it. Check out the conversation and notice there are actually more people participating in it from the staff than viewers.

And none of this is to say that a winter's night online meetup isn't worthwhile . . . Then again, a common refrain from biz people often scolds co-workers: This could have been an e-mail.

Anonymous said…
But we have to pretend otherwise.

I remember reading a book about animals on a farm in high school that warned about this stuff.
1/27/21, 8:03 PM

Anonymous said…
As long as there have been races, there has been racism. And there always will be. It may not be violent or loud or even spoken, but it will exist. No amount of money or campaigns or legislation, etc. will change it. The only thing that can change the mind of a racist is earning their respect and the black population has a lot of improving to do to accomplish that.
1/27/21, 8:13 PM

Anonymous said…
I have done some self investigation and decided I am a pretty swell guy... would anyone like to discuss it with me?
1/27/21, 8:30 PM

Anonymous said…
The blacks have racist hearts, minds and souls, what’s the commie red star gonna do about that huh?
1/27/21, 9:20 PM

Anonymous said…
9:20 Agree, and the star won't do crap. Why, you ask? Because it doesn't fit their narrative or the lib narrative for that matter.

What these F@cks don't realize it they are making things worse and people are tired of it....

And they wonder why the capitol was stormed (which I don't agree with) but I am worried we will see more of this. And all of this "wokeness" will have severe repercussions and I'm betting that we will see a push back that people won't see coming.

Anonymous said…
Why is "Black" now capitalized while "white" is not? The explanations for this change -- and I've read several -- are completely illogical and seem more about virtue signaling than anything of substance. Neither or both should be capitalized; not one or the other. The stupid "woke" mob ruining everything they touch.
1/27/21, 9:40 PM

Anonymous said…
DO NOT RENEW THE E-TAX!!!!! IF YOU HAPPEN TO BE CONSERVATIVE, WHITE, OR LIVE
OUTSIDE DOWNTOWN, THOSE DOLLARS GO TO ADMINISTRATION INSIDERS AND PEOPLE AND
GROUPS WHO HATE YOU. YOU ARE FINANCING YOUR OWN DOWNFALL IF YOU VOTE YES.

Anonymous said…
@ 8:13 pretty good. There will always be blacks (not capitalized) that hate whites and visa-versa. Their reasons don't have to make sense. Many whites hate blacks because of the government cramming special privilege's for them down our throats. Blacks hate whitey for white privilege that actually don't exist. Those things are the basis for racism. Every person on the face of the earth have reasons to not like things be they people places or things and it is not discrimination or racism to not want those things. It is time to stop stirring the pot and get over things that just don't matter that much.

Anonymous said…
It's amazing to watch to Star self-immolate over their focus on their interpretation of past events, decisions, and individuals using current norms, and all the while totally ignoring what a terrible "news"paper they've allowed themselves to become.
But their financial condition clearly shows that the public hasn't been distracted by the paper's comical self-criticism.
A serious metropolitan area needs a credible reliable source of actual facts and news, particularly to keep the public informed about local government.
The Star gave up on that idea years ago.
Sad.
1/28/21, 6:29 AM

Anonymous said…
The star has no paying readers.

Its revenue is from being paid to print subversive racial crap by jews/soros and the ccp
1/28/21, 7:49 AM