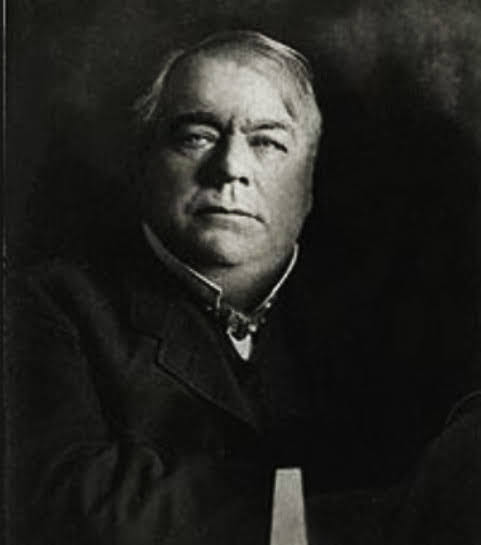 The newspaper seems to have given up reporting on Kansas City current events and instead seems dedicated to spending most of their quickly dwindling resources documenting their own newsroom trivia  . . . Very much like an amateur blogger.

This is what happens when printing is moved out of town and the so-called paper-of-record is now run by a handful of people who pay far too much attention to Anderson Cooper.

While it earned the newspaper some weekend pay cable coverage, this effort mimics their recent "apology" to Black people that was largely rejected.

And so, now the dead-tree outlet continues to mine its history and share stories that only resonate with former staffers and a handful of cowtown history buffs.

“The Kansas City Star has stripped from its pages and website the name, words and image that recognized its first publisher and founder, William Rockhill Nelson . . .

It became really obvious that we needed to make a change,” said Colleen McCain Nelson, vice president and editorial page editor for The Star. “We hold him up as a beacon of sorts. And it felt like we were hitting a wrong note by continuing to do that when we had just reported how he contributed to racism in Kansas City.”

Last year, The Star’s editorial board called for the renaming of J.C. Nichols memorial fountain and J.C. Nichols Parkway near the Country Club Plaza as city leaders reckoned with the developer’s role in sowing racial division across the city. The board also urged the Super Bowl-winning Kansas City Chiefs to reconsider the use of Native American symbols and the team’s name.

“We continue to wrestle with these questions in real time,” said Nelson, no relation to the founder. “Obviously, we can’t erase history and change the fact that he is our founder. Nor are we trying to.”

Hey man, this is going to win a Pulitzer and that can be sold as a very expensive paper weight.

I guess it's easier than doing journalism.

If they’re trying to get black people to subscribe to the paper they should stop right now, the blacks can’t read thanks to the kkkdemoncraps.

The kansas city star taking the name of the founder off their paper is the height of hypocrisy. All they need to do is look into the mirror and see that they're one of the most corrupt institutions in Kansas City. And taking the name off the paper does not stop the star from soiling itself the best thing to start could do is fold their paper and close the doors and say Kansas City from even embarrassment.

Man that's some kooky BS right there. Freaks oddballs and weirdo's running everything it seems.

If they would just shutdown, that would be the greatest improvement they could make.


Well this can go both ways. How many black people are racist and violent against white people? Malacom X Eldridge Cleaver "Emanuel Cleaver's cousin" Oh I mean Ewomanel Clever's cousin, Louis Farrakhan, Barack Obama, Michelle Obama, Rev. Wright. Maybe everyone should get together and bring a class action against the city of KC for racial hatred toward white people.


Kansas City Red Star is practicing Communism's "self-criticism" philosophy which re-educates its citizens to devoid themselves of God, Liberty and Freedom.

Communist China, North Korea and North Vietnam back in the day required this of all its citizens to enforce obedience to the Communist Party.

It's beyond comical and clueless that these folks criticize Nelson's quote that yesterday's Star was "A Paper for the People", but the horror of it being only for white people, and now claim it's a paper for everyone.
In Nelson's time and even up to a few years ago, the Star was actually a respectable source of actual news and had a substantial subscriber base.
Now that it has become a socialist woke rag and a paper for everyone, a handful of recent J-school grads find themselves working out of a garage somewhere for a newspaper that's printed in Des Moines.
Real progress there!
Sad.

It's the paper for no-one because no one reads it. The only time I go to it is to check out the hypocrisy and how they low they sink...

Oh wait, McKneely reads it because it's the people he sucks up to.


How much Chinese money does it receive a year to promote ccp/marxist propaganda.

I will dance in the street when this piece of garbage Star rag folds under the weight of its own guilt. Haven't bought nor read the Star in 20 years since they became so biased. Perhaps then we can get a fair and balanced newspaper in this town.

So much for the NA Museum. Bad name and premise. They need to close. Rockhill street by campus? sooo offensive to the students. People named William, highly suspect, will watch closely.

Luther was an anti-semite who led a reformation of the Catholic Church and most of Christianity. Wagner was a raging anti-semite and nationalist who wrote beautiful music. Newton was a vane genius to "borrowed" ideas from others to revolutionize physics. Pope John Paul was a charismatic leader who helped usher in new freedoms in his home county of Poland and eastern Europe but may have had a blind eye to crimes against children in his own church. My point is NO ONE IS PURE. A life is a totality of actions and beliefs. This "woke" movement is starting to remind me of the inquisition.

The racist Nelson Art Gallery should be closed immediately.

The Director of the Nelson Art Gallery should be imprisoned for promoting racist art.

I DEMAND the Star makes an in depth analysis of black migration from the south during a historic influx of immigrants and the manipulation/failure of & by politicians during reconstruction and industrialization.

there weren't many black people in KC before the great migration during the early years of the KC star and they were better integrated before than after.

He would have disowned the pink star long ago.

Ms. Nelson now leaving KC for California after supporting Sly and Lucas destruction of KC.
A la Godzilla after destroying one city moves on to her next victim community to destroy.

http://www.libertys-refuge.wustl.edu/Staff/Taylor/manual/manual.htm
"Although Negroes were political pawns in the hands of White politicians, Presidents Garfield and McKinley appointed Blanche K. Bruce of Missouri as Registrar of the Treasury in 1881 and 1891 respectively. In 1871, John Milton Turner became the first Missourian to serve in a foreign post as Minister and Consul-General to Liberia."

Hypocritical.
Liberal hypocrisy at its finest.
Why?
They charge for subscriptions much more than the people they are apologizing to a d they know it.
Real astuteness.

The people that are responsible for saying sorry are about as smart as a bag of rocks.

The whole cancellation culture is a dog whistle to get more subscribers and from what is known they should put themselves out of business sooner than later. They know not what they do.

Let’s just cancel them Democrat party as they voted to enslave while Republicans freed the slaves.
Shameful of any Democrats to be a member of that party.
Racist.

Most poor people can’t afford the star.
Most people that can afford it don’t subscribe.
Most don’t care what is published as so many better sources out their on all sides.
They are slanted and mostly one sided.
How much longer they exist is up to them.. looks like they are gone soon and don’t care.

I would be fully supportive of the KC Star cancelling the KC Star. This would save me more than $1,000 per year getting this so called newspaper on behalf of my wife. I had a feeling that the Nelson Atkins Museum would be next followed by the Kemper Museum. They can them move to the Kauffman Center as it to is a bastion of white privilege. We can then move to the University of Kansas who was founded by a bunch of white men.

Why the hell doesn't Colleen McCain Nelson change her last name to Tubman for extra BLM points? What about the Nelson Art Gallery? Hmmm Colleen? If you and the editorial board are so damn stupid to think the people of this town wrestle with the idea of your papers founder did some "racist" thing 100 years ago, then you have updated the meaning of the words, moron, imbecile, idiot, and others.

NOTE: Blanche Kelso Bruce was a man and a Republican.

So she munches carpet?? 👀

10:45, dishonesty at it's finest. She is married to a man, Eric Nelson, who has a high level position in the Star's digital department.

The Star's level of self-hatred in some sort of quest for "woke absolution" is entertaining. It won't increase their subscriber base as the left has better sources and the Star simply regurgitates others' perspectives. They are a failing institution, a drowning man suddenly disgusted at himself for having enjoyed breathing for so long.

Lots of fuss over fish wrap and bird cage liner. The Fallen Star hasn’t been used as a “newspaper” for years. Talk about anything with your friends, family, coworkers, etc. - no one says “I saw it in the Star.

In my response days ago to the KC Star Editorial Board's false and malicious attacks on MO Sen. Hawley ("Blood On His Hands"), I referenced that they themselves have essentially committed "journalistic suicide."

It now seems that the remaining few crew members at The Star are intent on following the editorial board's lead, and voluntarily slashing their own ancestral throats. I kind of get choked up just thinking about it, but then the bellows of laughter arise from my gut, and I try not to fall off my chair!

Colleen Nelson is off to California after having destroyed the new and improved editorial board. She reminds me of that Mi-Ai Parrish who perished from KC after overseeing the decimation of the news staff and company morale.

I previously described Mike Fannin's confessions of racism and institutional discrimination as like the former Nazi concentration camp guard who while lying on his deathbed, hours from demise, surrounded by those who finally tracked him down, deciding that yes it might be a good idea to reveal his sins and beg forgiveness. What does he have to lose at that point?

But now to today's main point. We're reminded that the Left's glaringly fatal flaw is that by following their own dictates and prescribed remedies, everything is destroyed in the end. The Democratic Left, the Socialist/Marxist/Fascist permutations, the BLM, the Antifa, the Global Warming/Climate Change crowd, the LGBTQ-Z, the kneeling/clinched fist athletes, the Big Tech Big Brother alliance of Google/Apple/Amazon/Microsoft/Facebook/Twitter/NSA/CIA/FBI/Pentagon will have you bound, shackled, chipped, and caged, while you're fretting over what color new iPhone looks best with your Nikes, Chiefs jersey, and customized perpetual virus facemask. There's no escape from their madness.

I’m sure somewhere William Rockhill Nelson greatly appreciates being disassociated with the piece of shit Star.

50 years from now Mchomeboy might be considered an Uncle Tom. we should be very careful on how we proceed with a Team's image . all this other shit doesn't matter. DEVO Bitches ! DEVO

1:08 plus a gazillion, billion, million

go to bed, you guys are drunk

at least we had a newspaper then. I couldn't find my paper this morning because the wind blew it down the street. That's right, the wind!