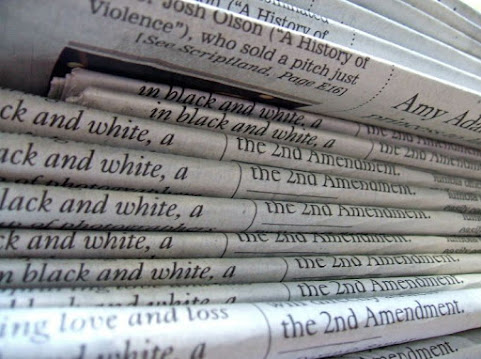 The newspaper still hopes to hold locals accountable for a recent American insurrection and has dedicated quite a few of their pages to this demand for justice.

Credit where it's due . . . Their most interesting recent report chronicles social media fallout after a local minister was identified near the crime scene.

Photos have circulated on Facebook of Lenexa Pastor Luke Weese attending the U.S. Capitol on Jan. 6 before the rally turned into a violent attack, fueled by President Donald Trump’s rhetoric. His church says he was there to pray and was not near the Capitol at the time of the raid. But church members say his attendance sends the wrong message.

It's unclear if church drama really has any impact outside the congregation but the outcry of suburban holy rollers deserves consideration.

In another leap of faith, here's a not-so-new attack against a Missouri Senator . . .

This link offers more detail, a fact check and reminds readers that newspaper editorials are no longer grounded in reality.

Still, the progressive screeds persist as audience and advertisers fade for the so-called "paper-of-record" that now mostly serves to document partisan screeds.

The "Church Members" in question support the Fascist, Republican/D﻿﻿﻿﻿﻿﻿卐﻿﻿﻿﻿﻿﻿M﻿﻿﻿﻿﻿﻿☭﻿﻿﻿﻿﻿﻿CRAT cancel culture which lines up victims like butterflies to break on the Progressive, all powerful, Weltanschauung Wheel of misfortune.

It's the Salem Witch Trials everyday in the Communist Cancel Culture where the wails and gnashing of teeth from overweening, sanctimonious, Socialist scum are actually the De Facto, extemporaneous laws/statutes that we are forced to live by in the new Fascist States Of America.

Anonymous said…
You're not listening to Der Fuhrer! Obey, buddy! I know you feel let down, going from last week's "We love you" and all.

Read that over and over again before you post anything else chuck, because that's what you've been doing CONSTANTLY. Your twisted view of what you consider to be "facts" practically make you un-American.

Anonymous said…
I have easily and happily reported Chuck M Lowe, resident of the state of Kansas, multiple times to the FBI hotline for suggest violence on elected officials. Can't wait when he's arrested & Tony is subpoenaed for all of his hateful rhetoric, Anti-Semitism and promises of civil war.
1/19/21, 8:25 AM

Anonymous said…
I certainly won’t be obeying chyna joe and both his hoes because chyna joe ain’t my president, never will be. I guess the riots can start on Thursday and not stop until him and the biden crime family are in prison. Not weird at all.
1/19/21, 8:29 AM

Anonymous said…
8:25 Will you be at the China joe impeachment party on Thursday! This will be easy and sweet, old man dementia joe will stroke out before it’s over!

Anonymous said…
^^Getting ready to be sworn in, readying his vaccine rollout, putting his cabinet together, getting ready to sign executive orders reversing all of Trump's failed policies, and healing the nation. Better question, where's Trump?? Hasn't been seen in public in over a week!
1/19/21, 8:37 AM

This "insurrection" narrative is overblown and fake outrage. Think back to your days in middle school. Remember how everyone was awkward? Some more awkward than others - everyone trying to figure out who they were. There was also some of the most cruel and thoughtless behavior from a handful of kids. There was also that one kid. The kid that didn't have any problem pulling the fire alarm, getting in a fight, and failing classes. He was a train wreck and everyone knew it regardless of how awkward they were. When he pulled the fire alarm it didn't challenge the authority of the school principal - he was firmly in charge. The parents didn't lose their authority over the kids. Teachers continued to teach after everyone came in when the all clear was called. People were not running crazy in the streets because of the bad action of one person who we all knew was "off".

These handful of wacko's that ran into the capital are "off". Call them terrorists, criminals, vandals, trespassers, or whatever label they deserve but let's not pretend out democracy was at risk. The process was briefly interrupted but the foundations of our country have never been stronger. Think about it - even after an exhaustive legal challenge to an election with pressure from the President of the United States to tender some dubious legal challenges our Democracy continued and our Democracy continued to work. The judicial, the executive, and the legislative branches of government continued to follow our constitution without a flinch.

The biggest risk is the talking heads continuing to pontificate end of the world scenarios about some secret society of people rampaging our state capitals, kidnapping elected officials, and taking over our governments. For what? Ratings? Power? Votes? Money? We just know that the most outrageous narrative gets viewers and votes.
1/19/21, 8:42 AM

Anonymous said…
The only disregard for truth that is evident is calling what happened on Jan. 6th an insurrection. Words truly do not mean anything anymore.
1/19/21, 8:49 AM

Anonymous said…
^^and yet that's why MAGATS are being hunted down and imprisoned all over the country. They are being charged with sedition, insurrection, and murder. Weird.
1/19/21, 9:08 AM

Hey Chuck, the more you post the more you prove even you don't believe your own shit. A church does not have to believe in freedom of speech. If you don't believe me, go into one and shout, "This religious crap is all bullshit" and see how long they let you rant on. As for freedom of association, pick up one of your tranny friends and take them to a service at a fundamentalist church and see how long it takes before both of you are out on the street--at gun point if necessary.

Anonymous said…
I have trouble believing chuck has tranny friends. I can't picture anything but mouth-breathing Neanderthals with a group IQ of 71.
1/19/21, 9:16 AM

Anonymous said…
Chuck is living rent free in chud bois empty head, just bouncing around in an empty skull and chud boi can’t do anything to stop him!

Anonymous said…
Tomorrow, Sleepy Joe kicks Trump’s ass once and for all! Hit the swamp you fucking loser, Don! See you in prison!

Anonymous said…
"I've done things no other President would be capable of." - Donald J. Trump

Chuck supporter said…
If the demon-crats get away with the theft of this election, there will not be another honest national election.
Adios America!
Everyone's freedoms will continually be eroded.
Even the troll hacks who pervert truth.

Byron Funkhouser said…
One of the nice things about holding every single insurrectionist accountable will be putting the lame lie that it was Antifa to rest.

They thought of themselves as patriots which is why they wanted everyone at home to know they were there.

Attempting to steal the election with the slogan "Stop the Steal" was Orwellian.

No one brings a gallows to a peaceful protest.

Anonymous said…
10:58 And yet anitifa and blm burned and looted and killed people during the riots of the last four years and they are still going on and you’ve not questioned or even admitted that it's happened or even voiced one word denouncing them. You agree to letting these murderous and destructive criminals off without so much as a slap on the wrist

Antifa and blm members were busted at the peaceful protest in the capitol, the fbi even admitted they had evidence before the rally that they would be there to instigate violent acts.

Anonymous said…
Democrats in Congress demanded that the troops sent to Washington this week submit to a political purity test -- "ideological vetting, as they put it -- to make certain that every soldier professed loyalty to the new regime. Not loyalty to our country, not loyalty to our Constitution, but loyalty to the aims of a specific political party. Nothing like that has ever happened in America and just a few months ago, it would have been unimaginable. Suddenly it's compulsory.

The extremely violent left wing nut job politicians have shown us their plans for the future, how hitler like.

Anonymous said…
The Democratic Party is using the military of the United States as a political weapon.

Once again: A career American military officer has called for "a domestic war on sedition by American terrorists". According to Col. Moe Davis, 25-year-old wheelchair-bound Madison Cawthorn, R-N.C. -- who was just elected by American voters to the United States Congress -- and the millions of Americans who agree with him and voted Republican in November, must be subdued by force.

Has Twitter seen Moe Davis' tweet? Has the Secret Service? Do they care? Will a single one of Col. Moe Davis' many allies in the Democratic Party denounce what he said or even tell him to cool it a little bit?

And what about the news media? Reporters are perpetually on the hunt for what they describe as dangerous extremism. Have they noticed Col. Moe Davis on Twitter? Probably they have, but of course, they agree with him.
1/19/21, 11:24 AM

Anonymous said…
CCC holds itself out as a diverse and welcoming church that embrasses diversity, yet President Trump has dismissed nearly all federal diversity programs. Fact, the entire Purkey family are ragging Trump supporters, so Luke Weese is no surprise. The entire CCC leadership likely would have gone to DC if they could have. Weese was just their representative. If I were in CCC leadership, I would just say that we belive in conservative biblical values and don't care about the consequences, instead of living the lie. And to be clear, it's no longer the 80s. Your social media accounts let us know who and what you are. Church folks need to stop being hypocrites.
1/19/21, 11:55 AM

Anonymous said…
Yep! No surprise about Luke Weese. And I imagine now that the church leadership will "change" for the donations and the tithes. But oh how I'd love to be at their Thanksgiving tables to prove that nothing has changed about them.
1/19/21, 12:00 PM

Anonymous said…
^^same with you. You know "Blue Lives Matter" and all that other shit you immediately stopped believing in once you stormed the Capital and promptly murdered a cop.
1/19/21, 2:55 PM

"Violence has no place and violence must be addressed," Pelosi told National Public Radio’s (NPR) “All Things Considered” in June 2020. "But there is no reason for the U.S. military to be called out for this."

There are now more troops in D.C. than there are in Iraq and Afghanistan. Nancy peebrain and the dimwit party has officially gone over the edge.
1/19/21, 5:07 PM

Anonymous said…
Blah Blah Blah - can we just all agree to lock up the trespassers and looters and move on with our lives. Stop apologizing and trying to tie yourselves into knots to explain why one group is justified and the other is not. The biggest healing our new president could offer is to uniformly condemn anyone who participates in looting, trespassing, or any type of political intimidation.

It's a long-shot but maybe the inflametory media and other elected officials would follow his lead by disavowing themselves of these people and moving on to support the 95% of our country that didn't participate in this nonsense.