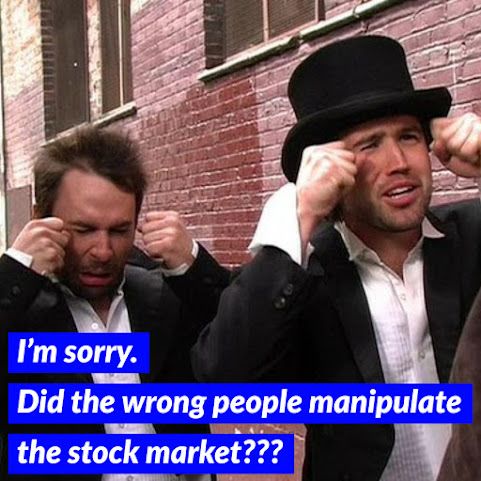 Despite all the hype and irrational exuberance of our online friends, there is a fundamental truth that is being overlooked amid a great deal of speculation.

Fundamentally, AMC, Gamestop and so many other garbage companies caught up in recent stock mania are BAD BUSINESSES that that have outdated models and challenging futures ahead that could end with their ultimate financial demise.

Everything else is just news about compulsive gambling and politics.

Look closely and the recent celebration of stock manipulation isn't really powered by an affinity for antiquated biz models, (supposedly) it's a rebuke of the powerful and super-rich market makers who have been greedily profiting from crony capitalism for most of the modern era.

In other words, this stock "revolution" is (allegedly) yet another celebration of populist politics and it's being effectively utilized to spark already rampant anti-capitalist sentiment as a precursor to tax increases and more stringent regulation of markets.

Most people are too broke to care one way our another, this hot mess makes the drama more accessible . . . Even if the rich vs. poor angle is merely a talking point/origin story to lure in more suckers looking to get rich quick.

Mr. Market is easily swayed, influenced and exploited but in the end, always, artificially inflated prices rarely enjoy extended climbs and often fall just as quickly as they skyrocketed.

For every get rich quick story the MSM celebrates, there will be far more people who bought in to the mania far too late or will be much too slow to escape with any profits.

The only thing we know for sure is that if old ladies and local newsies are talking about it . . . The trend is already over and the search for greater fools has begun in earnest.

Punchline: Just like all confidence scams, the motivation behind the trickery isn't nearly as important as separating fools from their money.

Whilst this blog is far too broke to offer any financial advice . . . We only share links and perceptive in order to remind people that profiting from overpriced popcorn & candy at empty theaters isn't a great biz going forward in much the same way that video games once offered at Game Stop are now overwhelmingly purchased online.

These news stories explain the phenomena much more eloquently and with more data that local newsies are too busy to read . . . Check-it:

CNN: His risky bet made him a millionaire on paper. It could've gone very differently