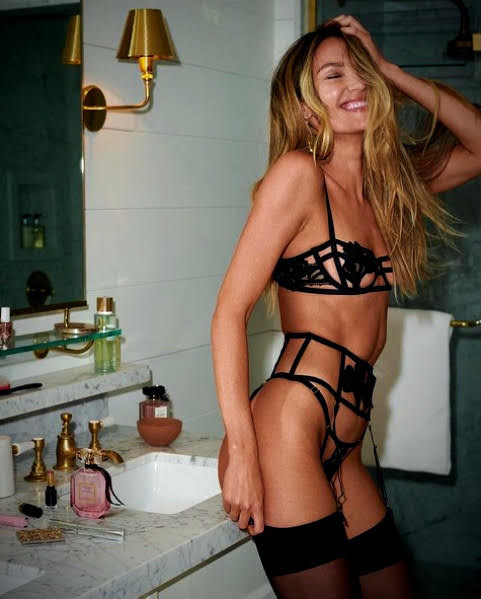 Corporate hype promises "inclusive" branding that only makes the search for our faves all the more fun. Accordingly, it's unclear if hottie Candice is supposed to be coming home or going out in this bit of pop culture panty promo but either way she inspires our evening glimpse at top headlines.

KANSAS CITY, MO (KCTV) - - The opportunity for school staff to get vaccinated for COVID-19 is drawing closer, and Truman Medical Center is working with seven area school districts to provide the shots in large numbers. It was almost a month ago to the day that Truman Medical Center gave its first COVID-19 shot to a staff nurse.

KANSAS CITY, Mo. - Kansas City, Missouri, police requested help from the public to locate a man whose military documents were found Saturday during a property crimes investigation. Central Patrol division officers were on scene at a vacant motel when they discovered the paperwork for Sgt. Carl A.

OVERLAND PARK, KS (KCTV) -- A family of two adults and two children are safe after escaping an early morning house fire Saturday in Overland Park. Firefighters responded around 6 a.m. to West 162nd Street and Juniper Street in response to the house fire call.

Amid the pandemic and mall shutdowns, Victoria's Secret is bouncing back stronger with a more inclusive outlook.

President-elect Joe Biden plans to sign roughly a dozen executive orders, including rejoining the Paris climate accord and ending the travel ban on predominantly Muslim countries, on his first day in office, according to a memo from incoming chief of staff Ron Klain.

President Donald Trump's personal attorney Rudy Giuliani tells ABC News he's working as part of the president's defense team in his upcoming second impeachment trial -- and that he's prepared to argue that the president's claims of widespread voter fraud did not constitute incitement to violence because the widely-debunked claims are true.

The mother of a man who is accused of carrying zip ties in the U.S. Capitol building on Jan. 6 was arrested Saturday in Tennessee, charged with entering the Capitol building. Lisa Eisenhart, 56, was charged with conspiracy, entering a restricted building, and violent entry or disorderly conduct.

Many charged with Capitol riots already documented their trips online

They posted that they were storming the Capitol to Facebook. They livestreamed it on YouTube and made Instagram stories of their fellow rioters as they broke in. As the FBI continues to round up rioters who stormed the U.S. Capitol on Jan.

Pro Athlete's secret to success: going against the grain, Andrew Dowis said. "We're known to do things that aren't the norm," said Dowis, who serves as the CEO of Pro Athlete . "I think that's why we pursued JustPaddles [during the COVID-19 pandemic]. We said, 'Let's look at this [pandemic] from another angle.

Harold Grove, one of KCTV5's first anchors, dies at 96

KANSAS CITY, MO (KCTV) -- Harold McGregor Grove, who was known professionally as Harold Mack, passed away at the age of 96 this week. Grove was one of the first anchors in the history of KCTV5, which was then known as KCMO. He graduated with a Bachelor's degree in journalism in 1948.

China Joe rejoins goofy Paris Accord. Climate will continue to change as it has for a million years. Only result will be higher energy cost and taxes. It is about money and control. Is China and India doing anything this stupid ?

Maybe Pickleball will be the salvation of the "T-Mobil-formerly-the-Sprint" Center.

Think about it, would you buy tickets to watch a Professional Women's Lingerie Pickleball Tournament?

And the rest of the World,
heaving a sigh of relief,
welcomes the United States back to Sanity.

^^ No, the rest of world is heaving a sigh of relief of America being back down on her knees right where the Kenyan and evil libs put her.

Sure, @8:11, but in three days your Hero is History!
Moving to another Country, Pal?

^^No need to move. The other countries are coming here.
See the caravan of beaners coming from the South.
By the way, a few of them will be robbing, raping and killing their way to Kansas City.
Happy, Bucko?

But remember. They won't hurt your incoming President. He has 50,000 National Guard surrounding him. Brave soul that he is.

^^and yet they’ll be a more productive & useful citizen then you are. Weird.

^^^Says Chimpy from the loony bin.