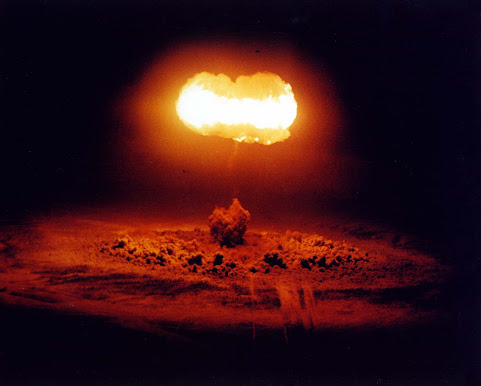 On Sunday night we share an alternative view of the local news scene and final word of the day from activists who advocate non-violence above all.

Peace activists gathered north of the fountain at Mill Creek Parkway and 47th Street in Kansas City, Mo., to celebrate the “entry into force” of the Treaty on the Prohibition of Nuclear Weapons (TPNW). To date, 52 countries had ratified this treaty, making nuclear weapons in these countries illegal. The UN vote for the TPNW in 2017 was 122-1, with one abstention and with many countries boycotting the vote—namely, the nine that have nuclear weapons and their allies. About 35 other countries have signed onto the treaty, indicating they will begin the ratification process.

Ann Suellentrop, M.S., R.N., project director of Kansas City Physicians for Social Responsibility (PSR-KC) and a board member of PeaceWorks-KC, made four key points. 1. Over 2/3 of the world’s countries support the Ban Treaty (the TPNW) because nuclear weapons are too dangerous. They threaten all life on Earth. They do not keep us safe. 2. There are negative prohibitions that affect the US and Kansas City. The Ban Treaty stigmatizes nuclear weapons and restricts the 36 multinational corporations that make them. 3. There are positive obligations that affect the US and Kansas City. The Ban Treaty mandates assisting radiation victims and cleaning up contaminated environments. 4. This is a turning point in history. It is up to us to make the Treaty work! For example, we can press financial institutions to withdraw their support from nuclear weapon companies.

Suellentrop added, “The Ban Treaty sets a worldwide standard, even if the US doesn’t sign it. It’s an international treaty among countries. It’s the beginning of the end of nuclear weapons.”

I'm sure this is something that would be up for a vote of the people? Right? That's what a Democracy is all about.

Nukes have prevented a world war for the past 76 years. It's the one instance where deterrence works.

We don't need them with chyna joe, china will protect us now.

President Biden is the greatest living president the world has known and he is deep in the pocket of China. China needs him, so...We should all be safe. Don't worry.

I am so relieved that Burkina Faso, Guatemala, Angola and Serbia have promised that they will not develop nuclear weapons. We owe it all to those anti nuke activists. Now they can start working on China, Russia, Pakistan and India to give up their nukes. When that's been done, and not before, they will have achieved success.

I most certainly did make the comment at 8:40! Got my meds mixed up. Sorry for the confusion.