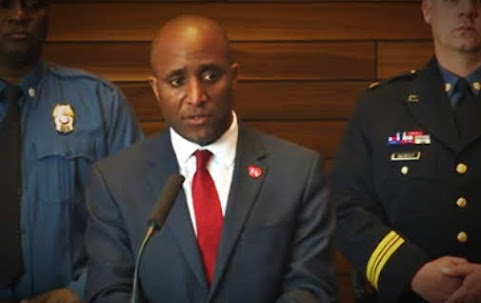 One of our favorite community newspapers establishes an important connection betwixt the 1st Amendment, the sordid issue of mugshots in the media and council control of police.

NORTHEAST NEWS EXPOSES MAYOR Q'S LOCAL CONTROL CRACKDOWN ON MUGSHOTS AS AN ATTACK ON BOTH POLICE AND THE FREE PRESS!!!

It's a thoughtful and complex argument . . . TKC also admires the small newspaper's restraint . . . It's surprising they didn't publish the mayor's mugshot from not so long ago . . . But that wouldn't be classy and might have detracted from their argument.

It’s nothing more than a suggestion to the police department to stop publishing mugshots. This way, the mayor and the riot endorsing council can go back to their woke, ban-the-police constituency and say, “Hey, we tried to work with them but they just wouldn’t abide. If we had local control, we could invoke this by fiat but we don’t.”

More failure by KCMO to address the real problem of crime and murder. Typical, typical.

He would eliminate mugshots of drunken mayors arrested sleeping in front of gay bars if he could.

The Mayor and most of the City Counsel are inept and not very nice and they do not care about the citizens. Everybody knows.

I suppose he could have said, “if you don’t want mugshots published, start teaching your kids right from wrong”.
It’s this kind of viewpoint from city government that has caused people to leave for good. Normal thinking people can listen to polititians and know the consequences down the road

The number one agenda of D﻿﻿﻿﻿﻿﻿卐﻿﻿﻿﻿﻿﻿M﻿﻿﻿﻿﻿﻿☭﻿﻿﻿﻿﻿﻿CRAT﻿﻿﻿s, after suppressing Free Speech and initiating a Chinese Communist Unit-Party system in the US, is making sure we can all pretend that the lion's share of crime is NOT committed by Black People when in fact it IS committed by black people.

If Black people, who, are actually the victims of most of the black criminals they support, got WOKE to the truth, that whitey is not actually the problem, not one fuckin D﻿﻿﻿﻿﻿﻿卐﻿﻿﻿﻿﻿﻿M﻿﻿﻿﻿﻿﻿☭﻿﻿﻿﻿﻿﻿CRAT﻿﻿﻿ would ever get elected to office again.

So - NO MUG SHOTS YOU RACIST BASTARDS!!!

Well, yeah, we wouldn't want to hurt any wrongdoers feelings would we.

Rhyming race reverends in the community should call they're own people into account instead of making excuses or remaining silent.

Why is it that most criminals are so damn ugly? I don't even want to see the mug shots as they make me sick to my stomach. I know a criminal when I see them based on their looks. Mug shots just bear me out to be right.

The race baiters say it is wrong to publish mug shots because it feeds into the stereotype of blacks as violent people. Well if the police make public all mug shots and 75% + of them are of black males, it isn't a stereotype, it's a fact.

WE can't have people actually "Noticing' things, can we...

What a crock! This is without a doubt the WORST mayor in the history of mayors, he doesn’t have a clue what to do. He keeps pulling at straws to keep the black reverends on his side so he won’t lose the only support he has left!

At his arraignment hearing, Quinton entered a plea of "not guilty" by reason of insanity, citing his upbringing as "a poor black child who experienced homelessness at times!!!"

Lucas has to go!

Wait a second here, Lucas has played the victim card all his life, it’s helped him tremendously to take billions of selfies to promote his sad pathetic life, afterall, where would he be without his victimhood?

Professor McDrinkerson sure has his finger on the problem! Yessir, it's those dang mugshots! How dare we show the faces of people who have been arrested for crimes! The humanity!!

More virtue signaling from the social media mayor as the city bleeds.

Good for the Northeast News for not caving to this suggestion. I still want to know what the criminal looks like (black or white or brown) so I can avoid them out in the world when JPB lets them out with a slap on the wrist.

As a surefire hedge against the coming inflation and devaluing of the dollar, as a result of the dumbocrap election results, I tried to invest in a sure thing, black owned funeral homes and cemeteries, only to be told, when they determined I'm white, these were exclusively reserved for fat reverends, Cleaver and Lucas folks.

Just in case anyone wants the Mayor's Mugshot. Liberal Privilege allowed him to walk free.

Local control isn't going to happen. Get over it.

Most of the Criminals you see in Mug Shots are career criminals.And they keep letting them out. SURVEY SAYS.BLACK'S HOLD MORE ANGER Then Most ethnic groups. Except for Italian and Latin women.Don't Hun,ME WHERE HAVE YOU BEEN.

You really want mayor Lickass Takaknee and his fat black clownsul telling the police how to do things? Dumbest idea ever.

I'm enjoying watching the Democrats try to broom the mess they have made under the rug. Even Cuomo says that if they don't open businesses back up in New York there will be no businesses to open up. The beauty of one party control is that the ones in charge get the blame. Take away the fraud votes and you have a whole lot more people mad at you than voted for you. No amount of theatrics will change that. It's all on you liberals. I'm well enough off that I can take the idiocy hit and come out just fine. Commence with the Night of Broken Glass.

Wouldn't want to find more evidence of wrongdoing! I wouldn't want a victim to spot their perpetrator by mugshot!

Mayor is unwilling to make the necessary cuts to KCFD. No way on police until he gets the Fire Dept straighten out.

Stop it Chuck! You are making too much sense. Liberal heads will explode, and young white women will be screaming at the sky.