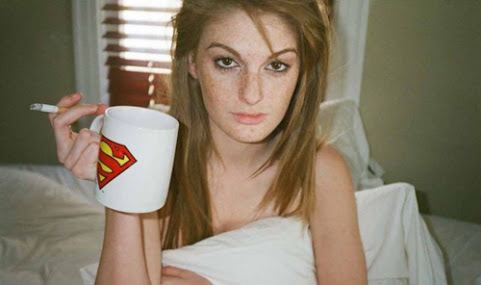 In much the same way that pr0n star Faye Reagan crossed over to do a bit of fast fashion promo, we realize that EVERYTHING is about making a sale at some point.

Accordingly, this morning we consider Kansas City merchants of beans & hot water as they do a bit of soul searching.

First complaint: They don't have a drive-thru.

More importantly, the proprietors have supercilious attitude about cream & sugar.

Then there's that very odd mission statement that might take java just a bit too seriously given that most folks are happy with the variety and flavor of gas station coffee fare.

More astute observers also have rude questions about their affiliation with a local MEGACHURCH that now seems to be cashing in on the land they own along the new streetcar extension line.

THE ODDLY CORRECT CREW CRUCIFY THEMSELVES OVER AN UPCOMING MOVE TO KANSAS CITY'S EAST SIDE!!!

Here's part of their latest social justice treatise that earned quite a bit of "creative class" love . . .

"As a business with white male ownership, we're aware of the significance of moving our operation to what is historically a racial and cultural dividing line in our city. We've been thinking hard about how to enter into this space and be an asset to the neighborhoods surrounding us, and we hope that through the way we've run our business up to this point we've earned your trust to approach this move in a responsible way that considers the impact far beyond just our day-to-day."

Yes, this is probably gentrification but in this garbage economy any biz is good biz and should be welcomed.

Their sentiments about occupying a space on Troost are rather saccharine for a joint that turns their nose up at sweetener and whip cream which everybody loves with their candy bar in a cup coffee.

Nevertheless, we think this is a good move and this part of Troost is poised for a real estate, new gentry boom that will actually help all of KCMO.

We wish them luck and hope they reconsider their futile war against the coffee-milkshakes that power every other successful barista-driven endeavor.

Anonymous said…
GOOD FOR THEM!

slow the fuck down said…
Went in there once. Didn't get served. Mostly ignored. I can't believe these fucktards are still in business. I realize I'm a dork and don't fit into their idealized view but to be totally ignored at the counter. Unbelievable.
Sure as hell ain't going to the new location other than to take a shit and make a mess.
1/23/21, 10:41 AM

Anonymous said…
Those two gays need to take turns beating the white guilt out of eachother. Moral preening will not do you any good on 42nd & Troost bitches. Better get a liquor license and start selling 40s and burners.
1/23/21, 10:43 AM

KC said…
Was looking forward to trying their coffee but if apologies are being made for white male ownership then I'd rather not. Woke is broke.
1/23/21, 10:44 AM

This is just sad the black people on the east side will destroy them, can they not see that? After reading all of the comments on here it sounds like the owners want gays only. Like I said before we are divided country now thanks mostly to the racist black people so......
1/23/21, 11:07 AM

Anonymous said…
So the koloreds don’t want whitey moving onto “their side” of troost?

Anonymous said…
I know this isn’t the right place for this but I found this and thought it was important enough to put out there...

Many lawmakers are calling the administration’s plans into question, saying state leaders were told these restrictions Democrats pushed on most states were meant to flatten the curve. However, in Biden’s address to the American people, he said it doesn’t appear there is anything the government can do to slow the spread and have things return to normal.

“If we fail to act, there will be a wave of evictions and foreclosures in the coming months as this pandemic grazes on,” Biden stated. “There is nothing we can do to change the trajectory of the pandemic in the next several months.”

This came after Biden criticized the Trump administration’s efforts to help Americans all the while promoting his COVID-19 plan during his push for the White House.
1/23/21, 11:52 AM

Anonymous said…
first there was segregation, blacks demanded that end, so the separate but equal policies came along, but that wasnt suitable either so full tilt bussing and integration, but that soon failed too; now the blacks want their own neighborhoods and stores, shops, anything really, but it has to be theirs!!!! so we have come full circle and back to segregation once again.

This culture is a plague on society, after 70 years of giving everything to the black culture, its not enough. Give them the world, it wont be enough! They take and take and give NOTHING back to society, angry people! They refuse to assimilate into the normal society, they are the perpetual victims! and its fed continually with white guilt!!!
1/23/21, 11:53 AM

Anonymous said…
11:52 biden is already taking credit for the 17.6 million vaccines given out under trump and is counting those towards his 100 million doses in a 100 days!

Anonymous said…
Model it after a indian reservation liquor store. One car garage with an automatic metal security door on a reinforced concrete building with a bullet proof drive up window like a bank. Only stock building with minimal stock and well insured equipment. War zone tax breaks and incentives to buffer your declining revenue.
1/23/21, 1:27 PM

Anonymous said…
1:34 blacks normal society is free rent, free food, free housing, guns, robbery, burning, looting, murder and making babies for free taxpayer money.... if that’s what you call normal society then no wonder whitey doesn’t have a good opinion of blacks. They refuse to be normal because they can’t be, their pea sized brains can’t learn what’s right from wrong so....
1/23/21, 1:45 PM

Anonymous said…
They're not gay. Its the progressive look that Russians and China are salivating about. As it would be a walk in and they would give them the keys to the country without a fight
1/23/21, 2:52 PM

Anonymous said…
They don't understand that libs are not supposed to fall for their own propaganda. They're in for a rude awakening. Hope they survive, as people. It won't, as a coffee shop.
1/23/21, 5:21 PM

Unknown said…
Yeah, who kills jobs on the first day of his Presidency as the country struggles with recession? Joe Biden.
1/23/21, 10:41 PM

Anonymous said…
yeaahhhhh sorry yall this is a bad move..Just not going to do as well..Must be getting kicked out off main?

Troost spot is not much bigger than your establishment on main...Zoinks..blahh blahh i love the acknowledgement of the impact you'll have on the other cafe's trying to make it..that you know you'll detract from their business..

comeon i know you are reading this..just don't do it! its not even about gentrifying the east side..its just gonna be whack as fuck over there. ..and dangerous for everyone crossing the street from hyde park. Just buy a house in hyde park and run it out of there...like all the home group church folks...

idk if you really do go through with it...don't be surprised if you're inundated with complaints from your clientele..maybe really be involved in maintaining clean streets and helping out houseless, struggling people on the streets. but idk if that's what you really want to be doing? if you don't really want to even give folks creamer....
1/24/21, 6:13 PM