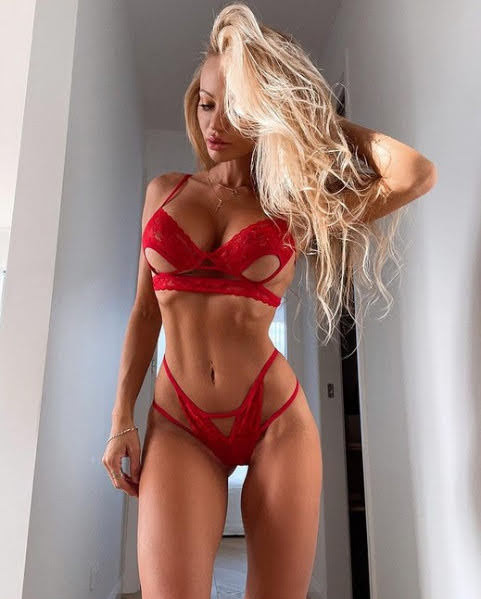 There's ample news to blog this morning but we search for inspiration via hottie Abby and her social media winning that surpasses the efforts of most brands as she shares skimpy panty game promo and lures her fans into forgetting that they're watching a commercial.

Performing arts in Kansas City continue to evolve amid pandemic

KANSAS CITY, Mo. - The show must go on, so the performing arts in Kansas City continue to find new and creative ways to adapt for their audiences almost a year into the COVID-19 pandemic. When the Broadway musical "Something Rotten" debuts at the White Theatre at the J next month, there won't be a crowd.

PARKVILLE, Mo. - Vivian Hatfield will never forget last year's AFC Championship game. That's because she never saw it. A freak internet outage forced her to listen to the game on the radio. "It was just terrible, everybody in the neighborhood was out," Hatfield said.

SOURCE: KMBC The city of Olathe has renamed Santa Fe Street as Chiefs Avenue through the Super Bowl.Chiefs Avenue is also lined with Chiefs flags. The city said both water towers will be illuminated in red and gold.Chiefs-themed lighting can also be found on highway exit signs to Olathe in support of the team.

Abby Dowse left fans speechless after sharing a gorgeous lingerie photo on her Instagram. The model took to the social media platform to flaunt her skin-baring outfit - and her voluptuous figure left her followers in awe. They clamored to view the post and showed their love by hitting the "like" button and raving in the comments section.

Pain relief medications like Tylenol and Advil are 'perfectly fine' - but only after COVID-19 vaccine, experts say

Avoid pain relief medications before getting the COVID-19 vaccine, but they are 'perfectly fine' to take after, experts say Headache, fever, body aches and chills. While these are completely normal side effects of the COVID-19 vaccine - and a good sign your immune system is working - they can be unpleasant.

FEMA has requested help from the Defense Department in distributing the COVID-19 vaccine. The Pentagon is considering the request and could send thousands of troops to help. FEMA is setting up 100 vaccination sites nationwide in an effort to speed up distribution. Visit Business Insider's homepage for more stories.

Virus variant from South Africa detected in US for 1st time

COLUMBIA, S.C. (AP) - A new coronavirus variant identified in South Africa has been found in the United States for the first time, with two cases diagnosed in South Carolina, state health officials said Thursday. The two cases were discovered in adults in different regions of the state and do not appear to be connected.

The left-wing New York Times editorial board supported President Biden's campaign and celebrated his victory, but mild criticism of his spate of executive actions drew a rebuke from Biden's communications director Thursday morning. Chummily headlined, "Ease up on the Executive Actions, Joe," the editorial board admonished him against relying too heavily on executive orders.

Wall Street investors have been betting that struggling video game retailer GameStop would fail for a long time. But over the past few months, a bunch of Reddit users have been pushing up the value of GameStop shares instead. At first, it was because they believed the company was better off than the Wall Street doubters believed.

TAMPA, Fla. (WFTS) - The excitement is building for both Tampa Bay Buccaneers and Kansas City Chiefs fans who call the Tampa Bay area home. Although this Super Bowl is unlike any other, fan groups are finding new ways to celebrate in style while also keeping safety top of mind.

Mostly sunny and breezy today with seasonally warm temperatures A storm will arrive Saturday late morning with rain likely into the afternoon; Rainfall amounts will add up to 1/2" to 1" in most areas Sunday turns much colder and windier with a few snow showers lingering in northern Missouri KANSAS CITY'S MOST ACCURATE FORECAST Friday: Mostly sunny, breezy and seasonally warm.

benny blanco, Marshmello & Vance Joy - You is the song of the day and this is the OPEN THREAD for right now.

See I told you so. Look at that fat woman with her bright orange shirt on, and the guy nest to her that screams "i'm an idiot." Is that ANTIFA in the background? Pretty sure it is. You know if that woman kneels for the cause she will never get up again. These are class act people. Ha Ha Ha Ha HA
1/29/21, 8:30 AM

Joe Biden the fake president says, pay no attention to that man behind the curtain. Oh my, it's Barack Obama pulling Bidens strings. Imagine that.
1/29/21, 8:35 AM

Anonymous said…
What Fox "News" (not surprisingly) fails to mention is that, while Biden has issued more than two dozen Executve Orders since taking Office, Donald Trump signed and issued ONE HUNDRED AND SEVENTEEN of those IN HIS FIRST WEEK IN OFFICE!

Anonymous said…
John Kerry Tells Workers Who Lost Their Jobs Because Of Biden*’s Climate Initiatives, “I Don’t Understand The Opposition”
1/29/21, 8:46 AM

Anonymous said…
Biden has issued about three dozen executive orders in his first week and Trump issued only three. They regarded the Obamacare penalty, building the wall, and cutting funding for cities that harbor illegal aliens. 8:43 is fake news.
1/29/21, 9:02 AM

Anonymous said…
The Facts
Biden has taken more executive action in his first week in office than his immediate predecessors and many of those orders have been aimed at reversing Trump-era policies.

The Economist noted on January 22 that Biden had signed more executive orders in two days than Trump had in two months and was setting a record pace, while NBC News lists 40 executive actions up to January 26.

Anonymous said…
When the New York Times tells you to knock off the EO crap you are really doing a lousy job as a Dumbocrat.
1/29/21, 9:44 AM

Anonymous said…
It would probably be embarrassing for 9:38 to have someone point out that his post supports the claims that 9:02 made. The commenters in TKC are not the brightest bulbs are they?
1/29/21, 10:34 AM

Anonymous said…
So is it racist to refer to the virus that was first noted in Wuhan, China as the China Virus but not racist to call a variant from South Africa as South African Covid? I guess we know which country has more influence over WHO and the CDC.
1/29/21, 11:15 AM

Anonymous said…
Happy Birthday to this tweet from Cameltoe Hairyass!


See new Tweets
Conversation
Kamala Harris
@KamalaHarris
.
@JussieSmollett
is one of the kindest, most gentle human beings I know. I’m praying for his quick recovery.

This was an attempted modern day lynching. No one should have to fear for their life because of their sexuality or color of their skin. We must confront this hate.
3:30 PM · Jan 29, 2019·Sprout Social