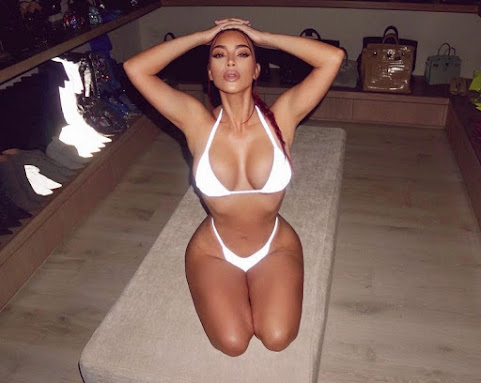 Right now, classic hottie Kim confronts harsh times along with the rest of the nation despite her MILLIONS of dollars in cash & merch deals. And all of THAT inspires our peek at pop culture, community news and top headlines this morning.

INDEPENDENCE, Mo - Jackson County received 975 doses of the COVID-19 vaccine in its first shipment which is going to what they call patient facing health care workers. Those vaccinations started Wednesday morning. It has been a struggle for healthcare workers not affiliated with a hospital system to get the COVID-19 vaccine, but the Jackson County Health Department is filling that hole.

Kansas Citians speak out about storming of US Capitol

All across the metro Kansas Citians reacted to Wednesday's developments at the U.S. Capitol."I've never seen anything like that at the Capitol," barber Ryan Surratt said.At the Surr-Cutts Barber Shop near 60th Street and Swope Parkway, business is at a standstill.

OVERLAND PARK, KS (KCTV) -- An Overland Park woman says she awoke to the sound of her smoke alarm to find her bedroom on fire. She evacuated safely and called 911. Crews from Overland Park and Consolidated Fire District #2 were called about 1:15 a.m.

Kim Kardashian and Kanye West are getting a divorce: 'She's done'

Kim Kardashian and Kanye West are over. Multiple sources tell Page Six that "divorce is imminent" for the Hollywood couple, with Kardashian hiring divorce attorney to the stars Laura Wasser. "They are keeping it low-key but they are done," says a source. "Kim has hired Laura Wasser and they are in settlement talks."

President Donald Trump said early Thursday that he was willing to allow an "orderly transition" of power, just minutes after Congress formally confirmed the election of Joe Biden as president. A statement from the president on Twitter via Deputy Chief of Staff for Communications Dan Scavino repeated baseless claims of widespread voter fraud, but included the reversal.

The U.S. Congress early Thursday certified the Electoral College vote that gave Democrat Joe Biden his presidential victory -- after a day in Washington that was marred by pro-Trump protesters storming the U.S. Capitol. Lawmakers returned to the chamber in an act of defiance, with some Republicans who initially vowed to challenge states' results due to voter fraud concerns announcing they'd instead vote to certify.

Washington D.C. police said late Wednesday that the earlier security breach at the U.S. Capitol resulted in four deaths -- including a woman who had been shot -- and at least 52 arrests. Mayor Muriel Bowser, a Democrat, said there will be an extension of the public emergency for the next 15 days, which is slated to run through President-elect Joe Biden's inauguration on Jan.

Dr. Dre's Home Hit By Would-Be Burglars Who Apparently Saw He was Hospitalized with Aneurysm

Some alleged criminals apparently saw Dr. Dre was in the hospital because they tried breaking into his home ... law enforcement sources tell TMZ. Our sources say 4 men were on Dre's Pacific Palisades property Wednesday around 2 AM. Security spotted them as they were casing the house.

'They could have and should have seen this coming,' local experts say of Capitol riot

KANSAS CITY, Mo. - Wednesday's breach of the U.S. Capitol has raised questions about how protesters were able to get inside Congressional offices and chambers. They're scenes few thought they'd see play out inside the U.S. Capitol, and it was easy for anyone who watched the chaos at home to second guess security measures and efforts.

For nearly a month, Copaken Brooks has been chiseling away at a multimillion-dollar effort to affirm its Town Pavilion tower as a "premiere Class A office destination." On Dec. 7, the commercial real estate firm began an effort to "dramatically transform" the 1100 Walnut St.

Everything you need to know about 2021's Kansas City Restaurant Week

Gloomy skies and a light rain will combine to make the evening a rough one for those with designs on spending some time outdoors. Just letting your dog out to do its evening business may be difficult with a cold rain falling on half melted snow.

Madonna - Justify My Love #1 in January 1991 is the #TBT song of the day and this is the OPEN THREAD for right now.

Town pavilion in the ugliest building in downtown skyline. Looks like an 80s aerobics class. Tear it down.


Where was everyone's opinion about the murderous BLM and ANTIFA when they were on a killing spree and burning cities down? BTW some of those people in the capitol building were ANTIFA. I guess it's O.K. for dirty black people to kill and riot and no one says a thing about it even when they shot and killed a police officer for no reason. You radical left people are gutter trash. Take your BLM and shove it up your selfish asses you filthy SCUM

Republicans have a serious problem. Are you an insurrectionist and part of the radical-right or not?

Ummmm. Thanks to Trump that train's left the station.

An orderly transition now would have to include video of a handcuffed Donald Trump being dragged out of the White House by his feet and dumped into the on Pensylvania!

Nothing else could possibly satisfy the American People after what he ordered his thugs to do to the Capitol!

@8:17 You right-wing shits have thrown away ANY rights to criticise ANYBODY for ANYTHING now!

@8:17 Either name ONE American City that has been "burned down" or shut your lying mouth!

9:32, and yet we will continue to criticize others, or not, as the mood strikes us. Sit back and enjoy the show.

^^because you don't have anything else to do. You're lonely, old, and broken. No friends, and no family who want anything to do with you. This is all you have and we all know it. How sad your failed life must be.

Civil war coming. Good luck with that Resident Biden. Keep your heads on a swivel Democrats. It will happen when you least expect it.

They brought it on themselves 10:24

Wait, what? Did CNN already brainwash Portland and Kenosha, among many many others, out of your feeble mind?

The government will fear the governed.

There will be NO civil war.

We have democracy instead.

As a WHITE man, I'm looking for a new barber and will stop by Surr-Cutts Barber Shop near 60th Street and Swope Parkway.

Democracy is dead. Many traitors will be too. They know who they are.

When the virus vaccine gets to the KCMO health department, I hope someone tells Archer not to drink it.
Given what's gone on so far, you really have to question his medical expertise.
Probably time for another grandiose press conference with him and smiley selfies Lucas.
When you're not accomplishing much of anything, try to wow the crowd with another show.

We are coming for you. You can run but you will just die tired.

After you shit yourselves because of a firecracker?


Joe Biden says Trump supporters treated differently than BLM and they showed a picture of the ANTIFA people who stormed the capitol building Ha Ha Ha HA Talk about pandering to the blacks. Biden has no clue what's even going on nor can he string two sentences together. You lefty terrorists are retarded.

Wait until he sees his precious blacks littering the streets lifeless.