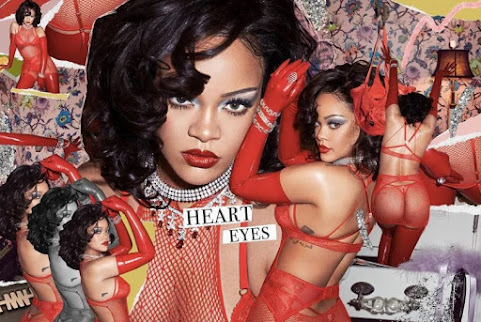 Right now we take a #TBT peek at longtime hottie Rihanna as she shares a glimpse of new merch for quickly approaching love day.

QUINTON LUCAS IS EXPECTED TO EXTEND THE CITY'S EMERGENCY COVID-19 ORDINANCE. ONE OF THE MOST TALKED ABOUT ISSUES, AND WE HAVE NOTED SOME OF THE CHANGES AROUND T REGION, I HAD A CONVERSATION WITH JURISDICTIONS LAST WEEK. I TALKED TO A NUMBER OF COMMISSIONERS YESTERDAY.

OVERLAND PARK, Kan. - A grieving Overland Park man must now wait until later this month for a judge to decide if can get his deceased wife's service dog back. Paul Marinsky sued Starfleet Service Dogs, Inc. (SSDI) last month after the Maryland organization took his late wife's service dog, Tootsie, against his wishes

KANSAS CITY, Mo. - The city of Independence said Wednesday it will extend a moratorium on utility shutoffs until Feb. 28. A ransomware attack on the city's computer systems in December resulted in a delay in billing and the online payment system.

Savage x Fenty is launching its Valentine's Day collection, and it stars none other than Rihanna. The highly anticipated drop features four playful collections - Candy Hearts, Seamless Fishnet, Linking Hearts, and the latest additions to men's underwear and sleepwear styles.

Opinion | This is exactly what impeachment was designed for

In January 1642, King Charles I was fed up with malcontents in the English Parliament who would not accede to his high-handed rule. He accused five members of the House of Commons of treason and then marched on Parliament with an armed guard, demanding that they be turned over.

Tucker Carlson: Why Democrats wanted to impeach Trump again, and why the GOP went along

President Trump was impeached Wednesday with bipartisan support. No matter how angry you may be at Trump over what happened at the Capitol building last week, watching this happen may confuse you. The chaos of an impeachment trial is hardly the peaceful and orderly transition of power both parties assure you they want.

Every product was carefully curated by an Esquire editor. We may earn a commission from these links. The institutions of democracy now require armed defense against the forces of sedition.

After All That, Trump Told Aides Not to Pay Giuliani for His Legal Services: WaPo

The relationship between President Donald Trump and his personal lawyer Rudy Giuliani is crumbling. The commander in chief has told aides not to pay Giuliani at all for his legal work attempting to overturn Trump's loss in the November presidential election, according to The Washington Post.

A couple of A-list celebrities and a former D-lister were dragged into Wednesday's impeachment hearings at the Capitol. They were accused of fomenting the violence ahead of the Jan. 6 Capitol insurrection, which ignited an unprecedented second impeachment of outgoing President Donald Trump just days before his term ends.

The Man Behind 'The Mahomes': Meet the QB's Barber

OVERLAND PARK, Kan.- Patrick Mahomes has a standing appointment. Each Friday during football season, at 4 p.m., he arrives at a storefront that reads BARBER in big white letters above the door. This routine began before he was the most famous person in Kansas City, and before some 25 customers a week started coming in asking for "The Mahomes."

SOURCE: QuikTrip QuikTrip announced Wednesday that it has added mac and cheese to its menu.The company said the new dish is available at all QT Kitchens locations.QT Mac & Cheese is made of cheddar, parmesan, American and Monterey Jack.The new item is available to order from QT Kitchens and also in the Grab & Go format and it can be ordered on the QT mobile app and ready for a curbside pickup.

Today is a Storm Track 5 Weather Alert Today. Strong winds over 40 mph are expected today. The winds could be strong enough at times this morning to cause hazardous driving conditions, some tree damage and power outages. Mostly cloudy skies and blustery today steady temperatures near 45.

#1 on the Billboard charts in January Of 1971, Knock Three Times - Dawn is the #TBT song of the day and this is the OPEN THREAD for right now.

saw that mahomes link behind a paywall, thanks for finding the free version.

The country is a goddamned powderkeg, but at least I can get mac and cheese at QT. Fuck. Just ... fuck.

The fork looked bigger than the bowl.

The Essentials of a Inclusive Man

Looks like the Left may be TRUMPED AGAIN. THE NATIONAL GUARD IS NOT THERE FOR TRUMP SUPPORTERS. THEY ARE THERE FOR THE WACKED,OUT FAR LEFT ON JANUARY 20 WHEN THE INAUGURATION IS POSTPONED. THE D.O.D.HAS ALL THE EVIDENCE. Arrests have been made in Europe they can't make them in Iran. And the D.O.D.HAS NANCY PELOSI COMPUTER. SHE HAS HER CHINA CONTACTS,ON THERE ENJOY THE SHOW

Is there a Democrat anywhere who doesn’t suck dick?

Bill Clinton. But he's a rapist, so there you go.

Sometime this year, we taxpayers will again receive another 'Economic Stimulus' payment.

This is indeed a very exciting program, and I'll explain it by using a Q & A format:

Q. What is an 'Economic Stimulus' payment?

A. It is money that the federal government will send to taxpayers.


Where will the government get this money?


Q. So the government is giving me back my own money?

A. Only a smidgen of it.


Q. What is the purpose of this payment?

A. The plan is for you to use the money to purchase a high-definition TV set, thus stimulating the economy.


Q. But isn't that stimulating the economy of China?


Below is some helpful advice on how to best help the U.S. Economy by spending your stimulus check wisely:

* If you spend the stimulus money at Wal-Mart, the money will go to China or Sri Lanka.


* If you purchase a computer, it will go to India, Taiwan or China...


* If you purchase fruit and vegetables, it will go to Mexico, Honduras and Guatemala...

* If you buy an efficient car, it will go to Japan or Korea.


* If you purchase useless stuff, it will go to Taiwan.


* If you pay your credit cards off, or buy stock, it will go to management bonuses and they will hide it offshore.


Instead, keep the money in America by:

1) Spending it at yard sales, or

3) Spending it on prostitutes, or

(These are the only American businesses still operating in the U.S.)

Go to a ball game with a tattooed prostitute that you met at a yard sale and drink beer all day!

No need to thank me, I'm just glad I could be of help.

7:27 YOU make an Excellent Point. And go See an 80s Retro Band. WE'RE AN AMERICAN BAND.

but it's joes kansas city bbq not quick trip

Poor Retro gets more and more frantic as the clock ticks down on the conspiracies he dreams of.

What's his record now, something like him predicting 24 of the last 0 "overturns of the Election Results"?

I know, Retro, "Just you wait and see!", well we've waited and waited since Novenber for your crackpot fantasies to happen, still waiting.

Geesus Retro. Sure man, sure. And Obamagate is landing any day now. The Durham report? Hunter's laptop?

Do you ever stop and say "damn, none of this shit I've been told is going to happen ever happens" and maybe come back to reality with the rest of society? Or are we just onto whatever the next conspiracy du jour is?

"After All That, Trump Told Aides Not to Pay Giuliani for His Legal Services"

Trump has never paid a bill in his life. It always amazes me that his latest victims always think "it'll be different this time."

Trump assembles a group at a place and time of his choosing and attacks the Capital, stops the lawmakers from choosing a President and kills police. We are ONLY impeaching him? He is a traitor and should be tried for treason and murder!