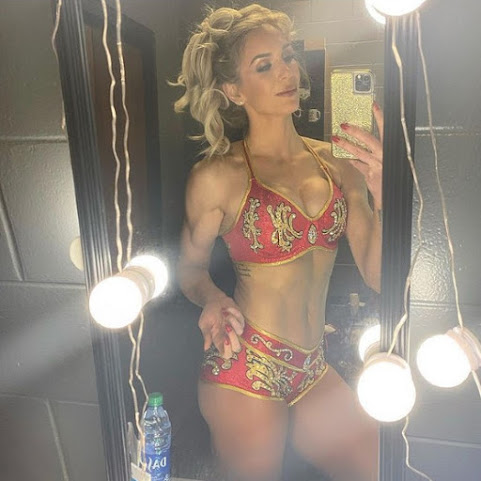 Tonight we take a quick peek at a fighting hottie along with a glimpse at pop culture, community news and top headlines.

In Search Of Merch

LENEXA, Kan. - There's strong demand for official AFC Championship merchandise as the Chiefs make their second consecutive trip to the Super Bowl. Rally House's flagship store got a jump start on sales by opening early Monday morning. The hottest items are the official locker room styles worn by the players Sunday night after their big win over the Buffalo Bills.

The Kansas City Public Library is introducing book bingo and other signature events to continue engaging Kansas Citians through literature. Book Bingo encourages discovering new authors, titles, and genres. Readers can access the bingo board here. When one of the 25 squares is clicked, the reader will see a curated list from library staff.

WWE superstar Charlotte Flair took to Instagram this weekend and reminded her followers why she's known as "The Queen." The 12-time former Women's Champion took a break from dominating her opponents in the middle of the ring to show off her glamorous side, much to the delight of her 4.4 million followers.

President Joe Biden on Monday offered his most extensive comments since taking office on President Donald Trump's impeachment trial, telling CNN "I think it has to happen."

The Senate on Monday confirmed as the first woman to lead the Treasury Department, where her immediate priority will be addressing the coronavirus recession. Yellen, a Democrat, was confirmed by the Senate 84-15, with broad bipartisan support. All 15 "no" votes came from Republicans.


Prez Trump Threw Coup And Nobody Showed Up?!?!

The Department of Justice Inspector General's Office announced Monday that they were investigating whether any current or former DOJ employees attempted to alter the results of the 2020 presidential election.

Political leaders and local officials in the Netherlands have condemned as "criminals" and "scum" the rioters who clashed with police during violent protests at the weekend against the country's first nationwide curfew since the second world war. More than 240 people were arrested as police used teargas and water cannon to disperse crowds of several hundred protesters in Amsterdam and Eindhoven on Sunday.

Nearly three years after the Weinstein Co. declared bankruptcy, a judge on Monday confirmed a liquidation plan that provides a $17.1 million fund for Harvey Weinstein's sexual misconduct accusers. The plan also provides $9.7 million to the former officers and directors of the Weinstein Co., allowing them to pay a portion of their legal bills over the last several years.

Arrowhead Stadium is approximately 1,200 miles from NYC and 1,600 miles from Hollywood, but we have an impressive array of celebrities who are self-proclaimed Chiefs fans. From Grammy winners to Oscar winners, the list is extensive. (Star-studded KC events like the annual Big Slick fundraiser certainly doesn't hurt matters.)

KANSAS CITY, Mo. - Local restaurants are getting another chance to cash in on the Super Bowl excitement. Starting Monday until the Super Bowl, Westport Flea Market Bar and Grill burgers are $2.55. Owner Joe Zwillenberg said the price symbolizes the Kansas City Chiefs' second Super Bowl in a row and Super Bowl LV.

Tuesday will be cloudy, chilly

Evening planner. Whether impact here through the evening will have light showers kind of off and on. As our temperatures fall closer to freezing, we'll watch for a wintry mix. May cease, um, freezing. Drizzle in there, possibly some sleet and then some light snow showers heading towards midnight and you're 31 degrees.

Byron Funkhouser said…
WASHINGTON, D.C.—Joe Biden signed an executive order this morning granting citizenship to everyone who voted for him.

Some ten million people are expected to receive citizenship through the executive order, making it the largest instance of amnesty in our nation's history.

"If you voted for me, darn it, man, you deserve to be an American," Biden said at a press conference this morning. "Thank you for your service, and welcome to America. You're all Americans in my book -- clean, articulate ones."

"Now, let's build back better!" Biden pulled out his phone and played "Despacito" in honor of the votes he received.

There was some confusion as he then appeared to hear a voice in his ear and said, "Breathe in, breathe out." The statement was praised by all media outlets as being "a powerful reminder that we need to just calm down and breathe."
1/26/21, 12:24 AM

The chiefs aren't champions they are low life selfish scum. People can't find chiefs gear because people aren't buying that crap. The only people who wear chiefs gear are fat sloppy drunks and black people both being violent anti American trash. What is really sad is when I see little kids who wear that crap. You always know who is trash when you see these people out and if you watch them they act like trash in the stores too. Glad I'm so much better than that.
1/26/21, 6:31 AM

Anonymous said…
A friend of mine out in Northern California sent me a picture of a twenty dollar bill that he got in change yesterday. On the back of it somebody had written in ALZEIMERS HOME with an arrow pointing to the Oval Office LMAO!
1/26/21, 7:35 AM

Byron Funkhouser said…
This is me hehe!

Anonymous said…
@6:31AM-and yet they're better than you. You're a miserable piece of shit. How about you keep your cock-hole shut until it's time for you start sucking dick you faggot?
1/26/21, 8:31 AM

Anonymous said…
In related news looser Donald Trump dropped his pants and waved his little dick around while yelling
"I am the president of the office of the former president!"
At 3 cheering MAGATs who happened to be walking by.
1/26/21, 8:46 AM

Anonymous said…
Donald Trump would do better to acknowlege his only REAL Accomplishment!
Of the four Presidential Impeachments that this Country has seen, 50% are his!
Now THAT took some doing!
1/26/21, 8:50 AM