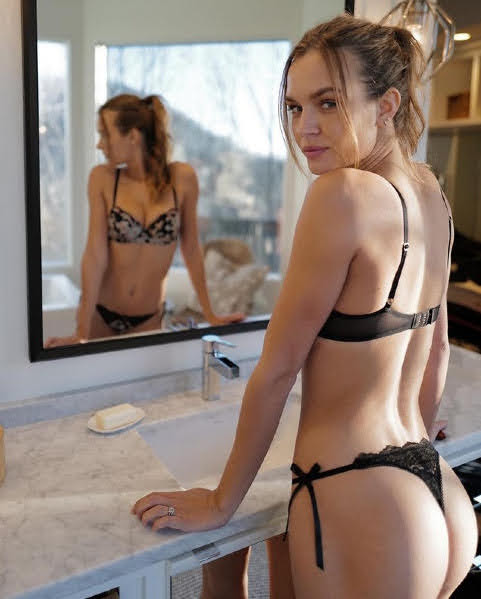 We begin the first Monday of 2021 with a cheeky glimpse at hottie Josie and the global panty industry along with a peek at pop culture, community news and top headlines.

Chiefs fans undeterred after loss to Chargers at Arrowhead

KANSAS CITY, Mo. - Despite the ugly loss against the Chargers, the Chiefs close out the regular season with the best record in the NFL and in franchise history. The Chiefs rested a number of starters to get ready for the playoffs, which undoubtedly led to the loss.

What if the Athletics had stayed in KC?

There's A New Mural On The Side Of Tom's Town

Victoria's Secret Angel Josephine Skriver flashed plenty of skin in a sizzling new snap shared by the underwear brand this week. The supermodel was on the company's official Instagram account as she posed in the bathroom next to a large mirror in a matching semi-sheer lace bra-and-panties set.

WASHINGTON - In an extraordinary rebuke of President Donald Trump, all 10 living former secretaries of defense are cautioning against any move to involve the military in pursuing claims of election fraud, arguing that it would take the country into "dangerous, unlawful and unconstitutional territory."

Critics have pointed out that despite repeated, scattershot allegations of fraud by President Donald Trump, every state certified its results - some of them after full recounts - and that dozens of court decisions have upheld the validity of Joe Biden's victory on Nov. 3.


Team Biden At A Distance

President-elect Joe Biden's inauguration will include a "virtual parade across America" consistent with crowd limits during the coronavirus era, organizers announced Sunday. Following the swearing-in ceremony on Inauguration Day, January 20, on the west front of the U.S.

Iran has restarted uranium enrichment toward a 20% target at its Fordow nuclear facility, a government spokesman said on Monday, according to the semi-official news agency Mehr and state news agency IRNA.

Kansas City Chiefs offensive coordinator Eric Bieniemy has been an NFL head coaching candidate the past two offseasons. Perhaps this third offseason will be a charm. With the league's regular season coming to an end on Sunday night, the interview process once again begins on Monday.

With all branches of the KC Public Library temporarily closing, locals must utilize their creativity in order to get their fill of free books in the coming weeks. For those living in Lawrence the Little Library Project, free mini-libraries scattered through the area, offers access to books for all ages.

Today is a Storm Track 5 Weather Alert Day. A dense fog advisory has been posted for the Kansas City metro and all our viewing area through noon. The fog will be very thick this morning with some slick/icy travel spots possible on untreated surfaces.

Harry Styles - Treat People With Kindness is the song of the day and this is the OPEN THREAD for right now.

I'm guessing that song selection is supposed to be ironic, you hipster bum!

Imagine a political opponent saying your Dad was part of the murder of JFK and then calling your old lady ugly......and then in turn you continually kiss his ass and go to bat for him.

That south park guy was a picture of health. The virus just finish it off much the same way the good old fashion flu use to do. Let China Joe and Cameltoe in office and it will magically go away in the leftist press.

Your gay stoner son still living in the basement at 48 said...

Poor guy. Maybe he also did cosplay as a FAT CHUD who looks exactly like @9:57. Post your photo and let's all judge your physical fitness. Stop blaming people for dying of the pandemic that YOUR president fumbled and let get out of control.


Of course the chiefs are undeterred after their loss. They don't care about anything but that free money they don't earn or deserve. I can't believe people are so stupid and mindless to support these drunk selfish domestic terrorists.


Dr. Fauci as Director of the National Institute of Health has the blood of 300,000 Americans on his hands for failing to prepare the country for a pandemic.

Fauci should be court martialed for his incompetence and dereliction of duty.

The South Park guy is a good visual of Weird Guy / Geezer Hater on this blog.

Ok, who is the asshole who turned off my basement lights ?


So China Joe Biden is going to have a "virtual" inauguration.

This whole election has been make believe by the elite Corporate Media and Hollywood.

I'm sure the "virtual" Hollywood produced inauguration will NOT have Biden speaking, but dramatic music in the background and weeping Marxists telling us how this is dramatically impacting their lives.

Expect to hear a lot of African hymnals and hate whitey / police propaganda.

^^^Yeah, because he's not a narcissistic fat fuck who needs "crowds" to stroke his ego.

Oh. My. Goodness. I may have broken Georgia State law when attempting to blackmail the George Sec. of State this past weekend. Oops. What's one more criminal probe? Doesn't matter. I can toss Bubba's salad as good as any bitch.

Rev Cleaver needs to thrown out of office and his status as a Reverend removed. Personkind has taken a big step backwards. It's only the 4th day into the next 4 years folks. The woke left liberals are just getting warmed up

My little library has Mein Kampf, White Power, and The Fat Fuck Died because He Was A Fat Fuck among other titles.

A little bit of history. When the Bolsheviks seized control of government institutions in its initial revolution against Kerensky’s government the Russian army stood aside and allowed the revolutionaries to act without resistance setting the stage for the later civil war. The government institution that was supposed to be bulwark against a lawless revolution abdicated its responsibility allowing one of the most tyrannical governments of the 20th century to establish itself without opposition. It appears that the U.S. military is infected with the same moral rot and will not allow itself to be deployed against the 5th column in America acting on behalf of the CCP in Beijing. Woe to America for the tribulations that are coming to her shores and a curse upon those who will not stand up to stop it.

The whole military thing was not directed at Trump, this was a reminder to China joe and both his hoes, pelosi and shoomer to leave them out of it. They explicitly said their only involvement is on Inauguration day and that’s it.

America is heading for its own Red October, and the military will stand aside to let it happen until it is too late to stop the destruction. Those who forget history (or never learned it in your case) are doomed to repeat it.

In other words, the military will allow a peaceful Constitutional transfer of power as it has always done?

No, it is going to allow an election to be stolen by a hostile foreign power, installing a senile puppet in the office of the presidency so they can feast on the carcass of this once great nation at their leisure. The end result will be a communist dictatorship and single party rule eventually ending up like Venezuela or Cuba. The light of freedom will go out in the world. That is what is at stake.

^^^and yet the military WILL allow the peaceful transfer of power as there was Zero proof of voter fraud and the military hates Trump. He called them losers and suckers. Weird.

4:00: For an alleged history scholar you seem to be ignorant of the fact that similar claims have been made by the losing party every election since 1800. And every claim, like this one, has been wrong.