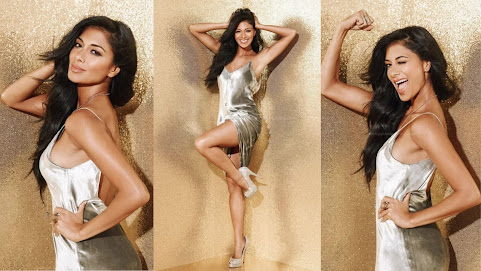 For tonight we take a peek at hottie Nichole's latest shared publicity tour as we consider pop culture, community news and top headlines for with our closest readers.

KANSAS CITY, Mo. - Restaurateurs who have been able to survive the pandemic welcome this year's KC Restaurant Week as an opportunity to serve more customers. Jane Zieha's restaurant, Blue Bird Bistro, has been part of KC Restaurant Week since the initiative began.

INDEPENDENCE, Mo. - Residents will soon receive city utility bills again after a cyber attack on the payment portal caused a lull in billing. Those bills, coming early in the week of Jan. 11, will account for the time lost, according to the City of Independence.

For the first time in 14 years, the official air demonstration team of the U.S. Air Force will appear in the skies above Kansas City in 2022. Kansas City Air Show Charities announced Friday that the Thunderbirds, "America's Ambassadors in Blue," will take part in next year's Kansas City Air Show.

House Democrats are furious at President Donald Trump and are quickly building momentum to move on impeachment of Trump in the next several days -- as soon as the middle of next week.

Democratic Sen. Joe Manchin signaled Friday he could oppose $2,000 direct payments, jeopardizing one of his party's priorities for when it takes unified control of the White House and Congress. The Washington Post first quoted the West Virginia lawmaker as saying he would "absolutely" oppose another coronavirus relief check to Americans.

House Speaker Nancy Pelosi has reached out to the US military about taking away President Trump's nuclear authority, an ask that may seem reasonable on the surface, given the violence at the Capitol this week. But she's playing a dangerous game with America's national security.

Beau Williams and Keely Edgington, the husband-and-wife founders of Westport craft cocktail bar Julep, are opening their latest concept on Friday. Canary, a modern American restaurant, is in The Netherland building at 3835 Main St. The historic structure sits along the coming streetcar extension.

HALEY ON YOUR WAY AROUND TOWN, : TAKE A LOOK. THE BUILDINGS. THE DETAILS. YOU KNOW HIS WORK. EVEN IF YOU DON'T KNOW HIS NAME. TED SELIGSON, AS MANY HAVE SAID, WAS AN ARCHITECT'S ARCHITECT. HALEY JACOB WAGNER TAUGHT WITH : SELIGSON AT UMKC.

With hundreds of board games, Cardboard Corner Cafe opens in Overland Park

OVERLAND PARK, Kan. - A new board game cafe is now open in Overland Park. The Cardboard Corner Cafe is located at 9240 Metcalf Avenue. There are over 700 board games to choose from, and guests can dine on sweet and savory waffles and appetizers. Madeline and Chase Davis own the cafe.

Saturday will be chilly, a few rays of sunshine

Temperatures will drop overnight to about 27 degrees. Saturday will be a chilly one. Look for a high near 31 degrees with a few rays of sunshine.