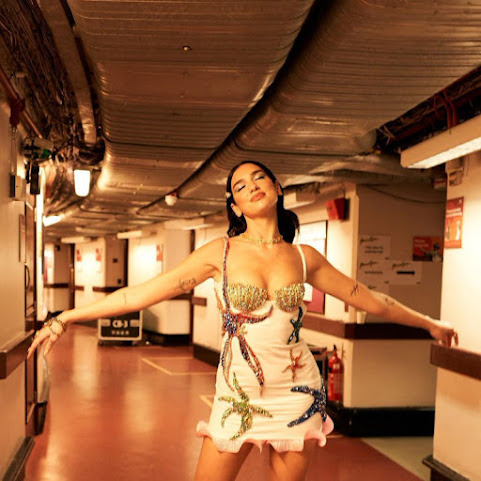 We start Friday with a peek at rising star Brit hottie diva Dua Lipa along with a glimpse at community news, pop culture and top headlines.

KANSAS CITY, Mo. - There are some concerns about whether a Waldo apartment complex was properly maintained before a fire forced 30 families out. On Dec. 28, a building in the back of Waldo Heights Apartments went up in flames. Kei Kei Lester lived there with her brothers and nephews and has been taking things [...]


KC Out Of Work

KANSAS CITY, Mo. - With the pandemic still raging and COVID-19 restrictions still in place, initial unemployment claims are increasing across the country, with nearly 1 million people filing jobless claims last week, according to the U.S. Department of Labor and Statistics.

It's a sight that brings pride to the heart of Kansas Citians everywhere, and it's returning to Arrowhead for the big game Sunday.Officials with Whiteman Air Force Base confirm the B-2 Spirit Stealth Bomber will fly over Arrowhead Stadium ahead of Sunday's AFC Divisional game against the Cleveland Browns.

Dua Lipa on Post-Grammys Strip Club Backlash: 'We Have to Support Sex Workers'

Lipa responded to the backlash in a new cover story for Rolling Stone on Thursday (Jan. 14), noting that the bash at the strip club was actually the opposite of anti-feminist. "I just feel like, if you're a feminist, you have to also support women in all fields of work," she explained.

The Rev. Franklin Graham compared the 10 House Republicans who voted to impeach President Trump to Judas, the disciple who betrayed Jesus to the Roman authorities. In a Facebook post Thursday in which Mr. Graham praised Mr. Trump at length while also calling the day of the assault on the U.S.

WASHINGTON (AP) - As President Donald Trump's supporters massed outside the Capitol last week and sang the national anthem, a line of men wearing olive-drab helmets and body armor trudged purposefully up the marble stairs in a single-file line, each man holding the jacket collar of the one ahead.

'Death Is the Only Remedy': Capitol Rioter Charged for Beating D.C. Cop With American Flagpole

An Arkansas man caught on video beating a Washington, D.C., cop with an American flagpole during the Capitol riots was charged on Thursday. Peter Francis Stager has been charged with obstructing a law enforcement officer for allegedly beating a Metropolitan Police officer who was guarding an entrance of the U.S.

Saved By The Bell's Dustin Diamond, 44, CONFIRMS that he has cancer

Dustin Diamond, who rose to fame as 'Screech' on Saved By The Bell, has confirmed that he is battling cancer His rep says he is undergoing chemotherapy after he was hospitalized in Florida over the weekend, where he remains for a 'ton of tests' The actor's friend, Dan Block, claimed

At a Shenzhen hospital, 21-year-old airport worker Wang Shuyue lines up to receive his second shot. "I feel it's safe because so many people around the country have taken the vaccine so there shouldn't be any major problems," he tells the Guardian. "I think it should be effective otherwise there wouldn't be so many people taking it."

KANSAS CITY, Mo. - The Kansas City Symphony will not allow in-person attendance for performances scheduled in January, it announced Thursday. The symphony previously announced it would allow people at 20% percent capacity beginning on Jan. 17. However it chose to delay in-person attendance until further notice to comply with Kansas City, Missouri's latest COVID-19 public health guidelines .

KANSAS CITY, Mo. - The Chiefs are back in the playoffs, and the hype is big. After finishing the season with a franchise record 14-2, fans are excited to see their team battle for another Super Bowl title. If you want to snag a photo to commemorate the moment, here are some of the best places around Kansas City to do so.

UP NORTH BETWEEN NOW AND MIDNIGHT IS WHEN WE WILL START TO CONVERT OVER, KANSAS CITY, RICHMOND, MARSHALL, BACK TOWARD LAWRENCE BETWEEN MIDNIGHT AND 4:00 IN THE MORNING. CITY VIEW CAMERA STILL BOUNCING BECAUSE OF THOSE GUSTY WINDS. 39% HUMIDITY, WE ARE NOT TALKING ABOUT RAIN OR SNOW AT THE METRO.

AC/DC - Realize is the song of the day and this is the OPEN THREAD for right now. Keep going for more local links . . .

Pedestrian critically injured after being run over by RideKC Max bus

KANSAS CITY, Mo. - A pedestrian is in critical condition after being run over by a RideKC Max bus Thursday. It happened at East Meyer Boulevard and Prospect Avenue just after noon. The bus was in the northbound lane on Prospect Avenue when it came to a halt at the corner for a stop.

'I don't know what to do': People in the metro still reporting holiday package delays

KANSAS CITY, Mo.- Post Offices and delivery companies are still recovering from the explosive 2020 holiday shipping season. Plenty of Kansas Citians say they are waiting for mail or packages to arrive that should have been delivered before Christmas. "I ordered masks for my kids, Christmas, in like October, and they just got here last week.

KANSAS CITY, Mo. - When you think of H&R Block, you might instantly think of taxes, but the company wants people to also think of it as a career opportunity. The global company that began in Kansas City decades ago and is still headquartered in the city needs to hire almost 130 people in the area.

A new Kansas City magazine launches Friday. It's called "All Black Everything." The editor in chief said it's designed to highlight Black-owned businesses but she acknowledges that she has faced some controversy.Trish Mitchell calls her magazine a labor of love and is anxious for its Friday launch.

Private Practice Doctors, Patients Wonder When It's Their Turn for The COVID-19 Vaccine

Dr. Andrew Carroll - a family doctor in Chandler, Arizona - wants to help his patients get immunized against covid, so he paid more than $4,000 to buy an ultra-low-temperature freezer from eBay needed to store the Pfizer vaccine.

KANSAS CITY, Mo. - Hy-Vee announced Thursday its plan to offer COVID-19 antibody testing at more than 250 of its pharmacies starting Monday. The grocery store chain will charge $25 for the tests, and patients should receive the results via email on the same day they're tested.

KANSAS CITY, Kan. - On Thursday, Kansas Gov. Laura Kelly toured a COVID-19 vaccination site in Wyandotte County, looking for ways to ramp up what some have called a lackluster vaccine distribution throughout the state. "I want to see what people are going through. I talk about this.

KANSAS CITY, Mo. - Almost one year after the pandemic shuttered theaters and live performance venues, a local theater has created a streaming option for audiences to safely return to the arts. In December, Musical Theater Heritage took over an empty art gallery at a crossroads hotel.

A Northland neighborhood could see an influx of thousands of new residents as more than 800 acres are built out in the coming decades. Kansas City planning staff now is reviewing an eight-phase master development plan, christened Tiffany Greens, that would fundamentally remake the city's Tiffany Springs neighborhood with a total of 1,872 new housing [...]

KANSAS CITY, Mo. - Na'im Al-Amin was first placed in handcuffs at eight years old. Now age 41, the Kansas City, Missouri, man says he was arrested for robbery as a boy. The charges were later dropped, but it introduced him to the cycle of mass incarceration in the U.S.

Kansas City International Airport's new $1.5 billion terminal and parking garage is scheduled to open in 2023. The project has a budget of $5.65 million for public art, making it the largest One Percent for Art project in the city's history.

KC killed small businesses and the cried that there was no money for residents. THAT is the legacy of this pandemic that we shouldn't forget.


The capitol riot was staged by ANTIFA and the democrats fund ANTIFA. The cop that was being beaten was beaten by ANTIFA and it was MAGA who tried to help him. Democrats are the new American terrorists. Don't hire them or do business with them in any way. Tell them to go to China or Mexico to get a job. When they need help or get in trouble don't help them. They won by cheating but that's not good enough for them they are still trying to destroy people. Apparently Nancy Pelosi doesn't know it's illegal to impeach a former president, by the time this impeachment is over Trump will be a former president and democrats don't have a problem with that money thrown out the window and for what to impeach a former president???? How does that make any sense. That's how evil and stupid democrats are.

^^^ and yet, the are arresting maga trump supporters who are on video rioting. Weird.

"The capitol riot was staged by ANTIFA"

Which is why Trump had that big rally right before, right? Sure! Makes perfect sense.

And Franklin Graham is relevant to anything these days... how?

There wouldn't be unemployment woes in KC if Mayor McDrinkerson wasn't a lockdown Nazi that deserves to die homeless choking on his own vomit.

The only good MAGAT is a dead MAGAT. Kill them all!

@8:12 Go spend some time with your grandmother for a little perspective on life.

^^Blow me while I shit CHUD.

When Dua stripped and went topless at the bar, she had the patrons yelling, "Make mine a double!!!"

^^and yet he didn't. He stomped a mudhole into trump's ass!! Go Joe! Weird.

Remember when Jesus said "I just grab em by the pussy" and "be nice, but don't be too nice"?

Christians like Graham are a wolf in sheep's clothing fleecing their followers out of all their money. I can see why he gravitates towards a grifter like Trump.

^True that. Christians are the most un-Christian people on the planet.

Christ yes. Christianity not so much.

What? Post when you sober up, if you ever do.