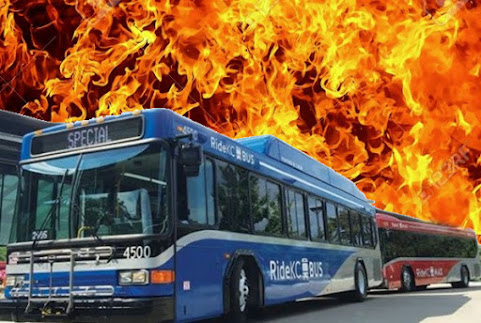 In Kansas City, the topic of public transportation typically downplays public safety concerns despite a myriad of violence endured by bus riders.

Even as DOT Sec Pete Buttigieg spreads the love for Prez Biden big bucks soon to arrive . . . The violence that often occurs near or around local bus stops is ignored.

The latest note from the courthouse posted just moments ago after more than a year of investigation . . .

A 27-year-old Kansas City man has been charged in connection with the fatal shooting in November 2019 of a man, David Como, as he walked home from his bus stop in the evening, Jackson County Prosecutor Jean Peters Baker announced today.

According to court records, Kansas City police officers responded on Nov. 12, 2019, just past midnight to the area of 56th and Park Avenue, where they found the victim, dob: 5/18/1973, in the street. He had been shot, and the Jackson County Medical Examiner later ruled the death a homicide. Police detectives obtained surveillance video from the KCATA bus that showed the victim getting off the bus at 11:47 p.m. on Nov. 11. A witness told police he normally arrived home about this time and would often take the bus. The victim was walking east on 56th when gunshots were heard a few minutes later. The back left pocket of the victim's pants were swabbed for DNA and in 2020 that DNA was matched to the defendant. In custody on another crime, the defendant admitted to police that he reached into the victim's pocket. He admitted to being involved in the robbery and said someone else shot the victim. In jail calls, the defendant also admitted to his involvement in the crime.

Anonymous said…
Hmmm, funny how they neglect to mention the race of either. Victim, David Como sounds like a white dude.
1/29/21, 12:12 PM

if you ban alcohol for like eight years you'll likely see a change - lower murder rates. maybe a woman mayor could see this through.
1/29/21, 12:55 PM

Anonymous said…
I'm impressed by the actual police work done in this case. It's not often is this town that we hear of DNA solving a cold case. Please don't mess this up JPB.
1/29/21, 1:29 PM

CITIZEN KANE said…
Quote by Jesse Jackson: "There is nothing more painful to me at this stage in my life than to walk down the street and hear footsteps... then turn around and see somebody white and feel relieved."
1/29/21, 6:12 PM

Anonymous said…
After being sworn in as Transportation Secretary, Pete Buttigieg said his 1st priority would be pulling a train from beneath the U.S. Capitol to the Senate/House office buildings.
1/29/21, 9:20 PM