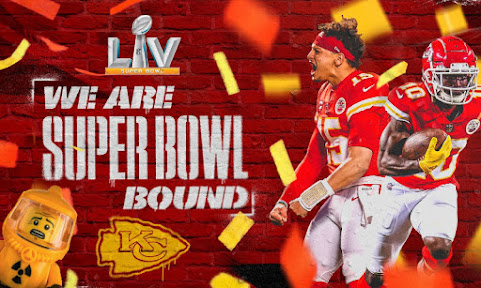 Some of our favorite news links on the topic . . .

In a game between the two best AFC teams, it was clear that one team was superior. The Kansas City Chiefs put together a complete games to control the entire AFC championship game, beating the Buffalo Bills 38-24 in a game where the Chiefs had a 23-point lead in the fourth quarter.


Military Overhead: The Only Flex That Really Matters

As part of an ongoing partnership between Whiteman Air Force Base and the Kansas City Chiefs, Sunday's AFC Championship game at Arrowhead Stadium featured another spectacular flyover before the game. This time, the team said four A-10 Thunderbolts participated in a flyover at the end of the national anthem.The A-10 Thunderbolt is flown by the 442nd Fighter Wing out of Whiteman.

LAS VEGAS (AP) - Oddsmakers like Kansas City to win a second straight Super Bowl, making the Chiefs a field goal or better favorite to beat Tom Brady and the Tampa Bay Buccaneers. The Westgate Superbook and the Station Casinos chain opened the game with the Chiefs favored by 3 1-2 points, with an over/under total of 57 1-2 points.

The Kansas City Chiefs knew the NFL had their number all season. They didn't blink. The Chiefs used stellar coaching and a stable of talent to answer nearly every challenge and engineer a second consecutive Super Bowl berth. Star quarterback Patrick Mahomes posted a spectacular AFC championship performance just one week after entering the NFL's concussion protocol.

The Chiefs' Sunday-night victory over the Buffalo Bills not only means Kansas City's return to the Super Bowl, but a repeat opportunity for local small business owners amid a rush of hometown pride, said Chase McAnulty.

KANSAS CITY, Mo. - For former Kansas City Chiefs players Neil Smith and Danan Hughes, the 2021 AFC Championship seems like the same song, but remixed 27 years later. Smith was a defensive captain on the 1993-94 Kansas City Chiefs and a Pro Bowler that year.

Kansas City, Mo. - Kansas City Chiefs quarterback, Patrick Mahomes is playing with turf toe in Sunday's AFC Championship game against the Buffalo Bills. Chiefs Head Coach Andy Reid talked about the extent of the injury after the AFC Championship game. Turf toe is the sprain of the ligaments around the big toe.

Anonymous said…
You fucking scumbag, degenerate, geezer, cocksuckers said they were one and done! Pat Mahomes is the greatest QB the game has ever seen or will ever know. Fuck you CHUDS who hatted on Mahomes all year! You fuming losers backed Trump, and rooted against the Chiefs all year! This has got to sting!!! Mahomes rules, you ducking CHUDS drool!!
1/24/21, 11:20 PM

Anonymous said…
Sleepy Joe moved into the White House *and* The Chiefs win the AFC Championship. Who’s tired of all this winning?!
1/24/21, 11:22 PM

Anonymous said…
What is mayor crap for brains going to say when thousands gather for another Superbowl parade and he tries unsuccessfully to stop them? Let me guess, suddenly Covid disappears after he's been responsible for putting hundreds if KC's best restaurants out of business and thousands of local employees out of work.
1/25/21, 12:42 AM

Anonymous said…
Were you one of these same CHUDS who was predicting covid would disappear the minute Biden was elected?

The Bitter Truth said…
Mahomes will party his ass off and come down with COVID and the Chiefs get the beating they are due.

So they won big damn deal Biden is still in office and more people will lose their jobs in the next few weeks because of it. You getting your next stimulus check is going to be dragged out for months so don't buy to much over priced Chiefs crap.

There will be a Super Bowl game and many will watch and afterwards see how if the Chiefs do win it will not in anyway make their miserable lives any better just more broke than they were beforehand after spending too much on shirts, food and so much booze they will be hungover for days. Yes the checking acct will be down hundreds of dollars, you may get fired for not showing up to work on Monday after the game and not a single Chiefs player one will care as they don't give a fuck what happens to you long as you hand your money over to them. They are the Frank Whites and Mayor Lucas of the sports world where they take it from you and in return you don't really get jack squat.
1/25/21, 1:31 AM

Anonymous said…
^^Shut your geriatric mouth moron. The Chiefs are fantastic! You suck as a human being! Mahomes is the greatest QB in the world, just sit back and enjoy the show you miserable piece of shit! Quit counting other people’s money scumbag! Who cares what they spend it on? Just because you’re a broke, hateful, scumbag, doesn’t mean the rest of are! It’s fantastic to root for the Chiefs, they are a first-class organization and Mahomes is a terrific role model who has done more for our community in his four years here than you have in your whole failed life! They’re winners, your a fucking loser! Go Chiefs!
1/25/21, 7:19 AM

Anonymous said…
I stole a sweaty Mahomes jockey strap and I have been sleeping with it over my head for a year. Can't wait to celebrate with that bubble-butted god, come come.
1/25/21, 8:37 AM

Casino Games said…
Knockout Diamonds - New Casino Games by ELK studios. Will the guys from ELK studios knockout us as with their new slot? All slots are free to try at slotalo. Take a look from over 16000 free slots to play.