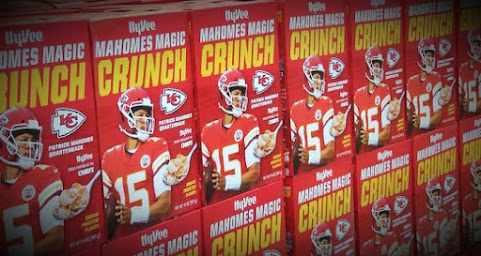 Today, all of Kansas City held their breath and prayed for health, well-being and protection of this town's beloved quarterback.

However, the struggle for a Super Bowl repeat clearly isn't going to be easy and footballers will likely have to earn ever cent of their lavish salaries.

Here's a roundup of some of our favorite news links . . .

KANSAS CITY, Mo. -- The Kansas City Chiefs advanced to the AFC Championship Game for the third straight season, but their divisional-round victory over the Cleveland Browns came at a cost.

Patrick Mahomes was knocked out of his divisional-round playoff game between the Kansas City Chiefs and the Cleveland Browns after a scary hit in the third quarter. Mahomes was scrambling to his right when he was tackled by a Browns defender. Mahomes was dragged to the ground and appeared to smack his head on the ground.

Patrick Mahomes suffered a concussion: What happens next?

Mack Wilson made the tackle on Kansas City Chiefs QB Patrick Mahomes that got him sent out with a concussion. Taking to Twitter after the AFC Divisional Game, the Cleveland Browns LB offered prayers to Mahomes, saying he hopes that Mahomes is healthy enough to play in the AFC Championship Game.

The status of Chiefs quarterback Patrick Mahomes is going to be the subject of great attention this week and Chiefs head coach Andy Reid offered the first update after Sunday's 22-17 win over the Browns. Mahomes left the game in the third quarter after suffering a concussion on a running play.

There isn't a worse situation for the Kansas City Chiefs than an injury to quarterback Patrick Mahomes. As they led by two possessions in the third quarter, Mahomes suffered a head injury that forced him out for the remainder of the contest.

Anonymous said…
so they got one.

Anonymous said…
You degenerate geezer cocksuckers said one and done! Ha! Just like with everything else on this blog, you have absolutely zero idea what you’re talking about!!!!!!! Chiefs rule, geezers drool!!!
1/17/21, 7:24 PM

Anonymous said…
I think it was the face plant into the ground that caused it, the dudes arm wrapped around his neck didn’t help.
1/17/21, 7:57 PM

Springheel said…
If--as some say--the NFL is all about cash--and would risk they're biggest star for the ratings and what have you-- why would they have shat all over their biggest fan base by supporting communism and BLM ? They lost 23% of revenue over first 5 games, then the next 11 games about 17%. That is in viewership alone, not Covid related. The revenue is down and way down, but backed up by the globalistic grabastic fucksticks who tell the NFL that they will bury them unless they tote the great reset line. The globalists don't care if Mahomes plays or not, but would probably like it if someone with a boo-hooey story of biracial insensitivity becomes the storyline.
1/17/21, 8:23 PM

Anonymous said…
BOO HOO HOO THE BLM MOUTHPIECE GOT HIT AND WENT BOOM IF YOU DON'T WANT TO GET HIT DONT PLAY FOOTBALL DUMBASS THEY CALL IT A CONTACT SPORT FOR A REASON YOU PUSSY CRYBABIES
1/17/21, 10:20 PM

Anonymous said…
Mahomie got his bell rang and all his little fanbois are crying like little bitches about it LMAO
1/17/21, 10:24 PM

Anonymous said…
You geriatric fucktards said one and done. Bunch of dumb asses. Stick to Depends and Matlock CHUDS, you all look like a bunch of faggots.
1/17/21, 10:44 PM