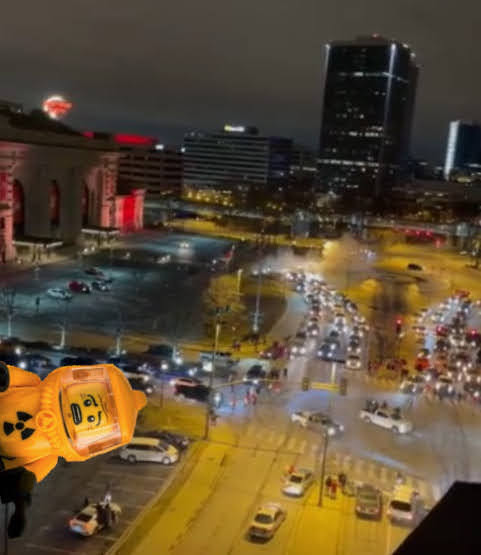 Given that COVID has turned downtown Kansas City into a wasteland, a street "sideshow" takeover was easily established near Union Station on Main street following the Chiefs victory last night.

In a public video, a citizen journalist offers a glimpse at seyz:

Later the cops broke up the disturbance because it likely awakened a few hobos sleeping in the park nearby.

For what it's worth, this is the the apex of the new streetcar extension - A mode of transit which contends that people don't like cars anymore . . . Strangely, that premise seems counterintuitive given this late night celebration.

Meanwhile, there weren't any busts reported in a longstanding effort to push "sideshow" gatherings away from downtown as these impromptu drag racing takeovers have attracted bigger crowds during COVID crackdowns.

my son and i were riding our bikes in west bottoms one saturday two springs ago and a motorcycle stunt "side show" came through and it was very dangerous. large groups burning out, stunts, running stop signs, etc. ended up ok but we had to stay well clear of the area til it went through. hundreds of riders, all in all.

some one will be killed and then people will wonder why the cops are some serious and so lame breaking up all our good clean fun
thx,

Bonus points if they had hit middle age crisis bicyclists and turned them into road waffle.