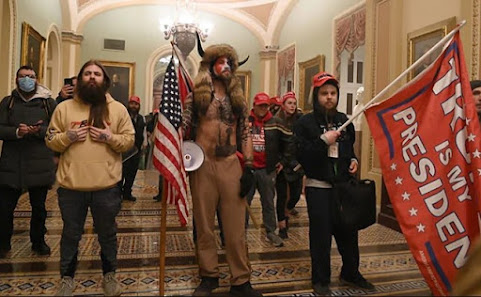 Local newsies were forced to talk with quite a few college professors and other experts in order to try and find a local angle on the recent Democracy hot mess.

Accordingly, here's our collection of some of their more interesting reports worth sharing . . .

WASHINGTON - FOX4 has been in contact with groups of people from the Kansas City metro who traveled to Washington D.C. to attend Wednesday's rallies. Some of those people say they wanted to witness history, hoping the presidential election would be overturned and confirmed to be fraudulent by Congress.

KANSAS CITY, Mo. - A day after the Electoral College certification process was delayed by a deadly riot at the U.S. Capitol , Sen. Roger Marshall called for "a peaceful transition of power." Marshall, a Kansas Republican, was one of six senators along with Sen.


All Rioters Are Equal

Activists see double standard between BLM protests, riot at the US Capitol

THE PLAZA LAST SUMMER. YESTERDAY WAS DEFINITELY SHOCK TREATMENT. I THINK IT SHOWS CITIZENS ACROSS THIS COUNTRY JUST HOW FAR HAVE BECOME DIVIDED BIANCA: -- DIVIDED. BIANCA: TARENCE MADDOX SAYS THE RESPONSE TO THE MOB AT THE U.S. CAPITOL DEMONSTRATED THE RACIAL DISPARITY PROTESTED IN 2020.

US Capitol has never seen chaos quite like this, local expert says

KANSAS CITY, Mo. - Wednesday's violence at the nation's Capitol will go down in history books. Rebecca Best, associate professor of political science at the University of Missouri-Kansas City, said there have been violent attacks on the Capitol in the past but not quite like this.

Video above: McConnell says 'our democracy will not be deterred' after Capitol riots The chaos at the U.S. Capitol on Wednesday wasn't the first time there's been violence at one of the most iconic American buildings.For more than four hours, supporters of President Donald Trump occupied the Capitol in an attempt to fight against the ceremonial counting of the electoral votes to confirm President-elect Joe Biden's win.

After a riot that disrupted Congress on Wednesday in the U.S. Capitol, many are now asking why it happened. Christopher Gunn, a Washburn University professor of law, said it boils down to rhetoric from president, who has consistently claimed the the election was rigged.

KANSAS CITY, MO (KCTV) -- Top Democrats in Congress, and at least one Republican now, are calling for President Trump to be removed from office either through the impeachment process or the 25th Amendment, under a section that allows for forcefully removing the President of the United States.

^^^ Absolutely not true. He has been ID'd and he's a MAGA QAnon supporter. If all you have is lies, no wonder your president is going to be thrown out.

^^^this is the play now from these dumbasses. "It WaS iNfiLtrAted bY AnTiFa"

Washington D.C. is an enemy city, in an enemy territory, filled with enemies of the American people. We have seen, over the last year, business' neighborhoods, blocks cities burned by the DNC supported BLM/AntiFa scum that wants you fuckin dead.

Fuck Washington D.C. and fuck the scumbag filth that live there and make bank off of the taxes they euchre out of every day middle class Americans and---THEN expect you to like it and OBEY!

Fairfax County is the RICHEST county in America and the reason why it is the richest county in America, is because of all of the Federal Fascist Employees who live there and dictate how much you WILL BE FORCED TO GIVE TO THEM EVERY YEAR, EVERY MONTH, EVERY WEEK, EVERY DAY by way of so called "Compromises" between the Republican, Vichy liars and the Democrat Fascist party.

Quelle horreur!!!! Broken windows and the scumbag politicians who were busy sucking the life out of your future had to take a break from pretending the election was on the up and up *snickers all around in the Rotunda* and hide like the fuckin cowards they are when actual voters showed up pissed off.

Of course, Law Enforcement, now firmly under the direction of the NAZI/Gestapo/DOJ/FBI opened fire on an unarmed lady and shot her dead. Really stud motherfuckers there huh?

For 4 fuckin years DNC ersatz brownshirt/BLM/AntiFa scum tore this country apart while the Biden/Harris campaign actually made bail for the felons/DNC operatives who committed the crimes, so, they could return to the streets and burn, loot and assault again.

No Viking ever wore a head covering made of or made to look like the horns of an American bison. He looks more like a mountain man to me.

If chuck had three sons, well, you know the rest.

Has everyone heard the latest Bandit/Chuck/Retro joke?
"Three guys walk into a bar..."

DC has never seen chaos like this before? How about when BLM burned the historic church across the street from the Whitehouse. What selective memories you all have.

MAGA is going to be certified by Homeland Security as a "domestic Terror group". Why - because they attacked and overran the US Capital thats why!

it was like a mad max thunder dome directed by mel brooks a total disgrace, hawley is done. trump, wow, you went out so bad, sorest loser ever. impeach him and also do amendment 25 action, whatever is first, give time for Pence be president a few days or a week.

Hope the guy on the right has compassion enough to donate the toilet paper on the stick he's holding to some Homeless Shelter.

Here's a chuck joke for you: Who's the craziest, most irrelevant dumbass in Kansas? Chuck M. Lowe! HA! HA!

Dumpster diving for Trump memoriabilia will soon become a thing, if Jafar and Darth Vader collecibles are popular think of how hot the market will be for Donald's Villany fans.

Will there be a Kamala Harris bobble head?

Because that's her real skill set. :)

^^^She used to also be pretty good at the old bobble butt - Willie Brown being the bobble butt beneficiary.

Big Sexy has a hot take on the aftermath of the latest events in DC.

You're telling me the manlet on the right isn't antifa?