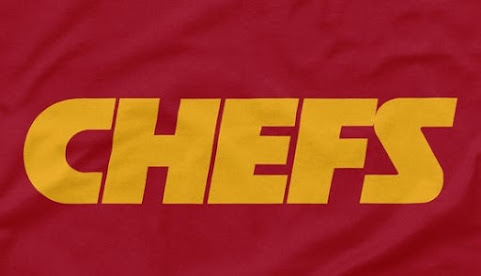 It's pretty clear this report might have been written by a robot given that the "news" actually covers two different kind of ripoffs . . .

However, the note brings to mind a truism . . .

Nobody was ever "tricked" by knockoff Kansas City knockoff merch. It's a local working-class tradition that spreads cash to enterprising locals who are risking their freedom and financial losses in order to cash in on civic hype.

Moreover, whilst we don't condone it, the merch offers cheapskate locals a way to feign excitement without breaking the bank.

To be fair, there are legit local companies who are doing quite well by sharing designs that are reminiscent of official merch without crossing the copyright line.

For the win . . . Buying from hipsters, hip-hop entrepreneurs or shady road stands isn't nearly as rewarding as making fun of grown men who pay BIG BUCKS to wear the name of other grown men on their backs.

There is more rip off stuff for sale than the legit stuff. Should ban the sale of all of it. Rents are due, kids need new shoes, cupboards are bare, so moms and dads need to stop wasting money on this silly crap.

The county pays for much of the stadium operations so if creative locals can get piece of the action more power to them.

some of those shirt forgers are pretty cleaver, oops, i mean clever.

You might think law enforcement would have better things to do than enforce trademark violations. Especially when the billionaire "victim" extorts millions from the taxpayers each year.

Very important issue. I want the $90.00 sweatshirt, not the one that looks just like it for $30.00, if it's a copy. I demand my right to support the NFL with my hard earned dollars. I have every right to pay through the nose for tickets, parking, poor overpriced food as well as the gear. My Jackson County dollars helped build this stadium, and I deserve to be fucked by the league.

The NFL doesn't need the money.

I fell for this once 50 years ago. A guy came up to me with an envelope and said it's a signed picture of Dawson for $50. Took it home and opened it up and it was Richard Dawson.

I say print the hell outta all the fake crap until nfl realizes right of private property and starts supporting America and the real consumer.

Prior to the playoffs, when Coach Andy Red emphatically stated, "let's not make this about 'I'", the marketing team followed suit!!!

last year after we won I bought a super bowl champs hat off a guy on the 106 quindaro bus, for ten bucks. in a couple of months the nice arrowhead red was a sultry pink

think it was a knockoff?