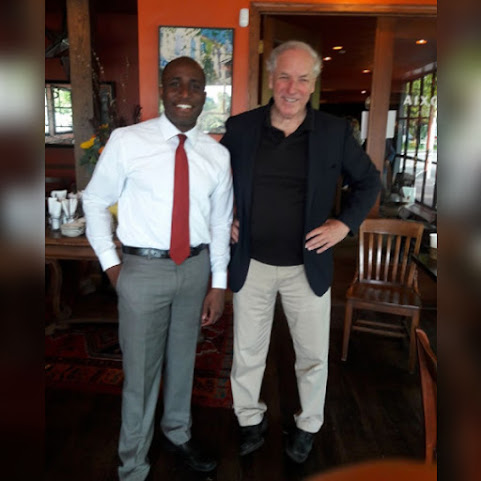 The prolific right-wing scribe shared a simple message this week that sparked a social media firestorm.

Since that time, it's fair to note that the relationship betwixt Mayor Lucas, law enforcement and conservatives has deteriorated.

Mr. Cashill's apology didn't take a whole Sunday issue of the newspaper. Instead, the terse post simply offered a familiar photo and noted . . .

Surprisingly, Mayor Lucas responded with an odd line that was probably a reference to Senator Hawley's recent rebuke from colleagues following the insurrection at the Capitol . . .

"You and Jack Danforth have much in common."

With that, Mr. Cashill offered a bit more context . . .

"I admire your willingness to respond, but taking a knee with the people who wantonly destroyed the Country Club Plaza disqualifies you from commenting meaningfully on any other protest."

There was some back and forth among fans of Mr. Cashill with the mayor contesting the assertion . . .

"I took a knee with the police chief when we were meeting with folks to de-escalate the situation. I also went out so folks with problems could actually speak to a policy maker. Unlike other cities where mayors lost total control and connection with the crowd, our interventions kept the Plaza from being destroyed and later kept protestors from attempting to breach police headquarters, as I encouraged them to walk the other way. I’m proud of those interventions. Unlike Washington, our nation’s capital, we didn’t lose police headquarters, City Hall, or any seat of government power, and we certainly didn’t create the forum for dissent unlike those in Washington this week. Carry on from there."

There was continued assertions that the mayor chanting "no justice, no peace" with protesters on the Plaza was a provocation for violence.

Of course nothing was resolved but it was probably one of the most telling exchanges we've seen so far regarding the similarities betwixt this week's MAGA riots vs. KC "mostly peaceful" riots on the Country Club Plaza last year.

Therefore by their fruits you will know them.

Lucas needs to read Jascon Whitlocks and Super Daves stories. From that I would hope he'd start having many sleepless nights as Lucas needs to atone to his reckless leadership. If anyone needs or should be removed from office it's Quinton Lucas, Jean Baker, Frank White, and Daryl Forte.

They should have stormed city hall instead of plaza and demanded the monies for developer parking garages.

Lucas is probably the worst mayor in our history, only because he mistakes pandering for governing. His ideas are bad when he has them. He has absolutely zero useful insight or willingness to confront the city's problems.

Does Crazy Cashill think his "endorsement" made a difference in the election?

^^^Agree about give-it-away Kay, but Lucas is doing OK. He's just not a fan of developer subsidies, hence the opposition.

Lucas is an empty suit who endlessly panders to whatever group is in front of him. spins wildly like a weather vane in a hurricane, is far more interested in his own perceived self-importance, making grandiose statements, and TV appearances than in accomplishing anything, and has already demonstrated his lack of interest in the basic services that residents depend on.
Another three years of empty showboating and selfish career advancement.
Dig deep, KCMO taxpayers!

Lucas is desperate to ingratiate himself with the Demo AOC radical agenda.
He knows he can be the next Barak Hussein O.

Why do blacks in Gov't always refer to people/citizens/constituents as 'Folks'?

It’s our time to protest. No more marches and asking city leaders to do what the majority of this city wants. City leaders have ignored crime, services and the needs of the entire city. Shields runs this city and her blatant attempt to destroy services needs to end. Vote no on the E-tax and make sure your neighbors and friends do the same.

No apologies for the murderous, traitor MAGATs though. Until then, all Republican viewpoints are null and void.

Ignorant Republicans Riot And Don't Even Get Any Big-Screen TVs

Lucas has his sights on far bigger that local politics - in a way that is good for Kansas City, but only if he is inclined to not bankrupt us before he moves on.

Unfortunately for you, conservatives make up about half the country.

Original? You get a star for copying posts on internet to substitute for your lack of original thoughts.

QUINTON LUCAS IS A TRANSPARENT FRAUD

Cashill's apology was long overdue, but appreciated, as he's the son of a police officer.

Click on the link of Lucas shouting "No justice, no peace" on the Plaza, and once again, we see an example of Lucas pandering to those he views as his intellectual inferiors. Did you catch his altered language patterns? As Quinton addresses these misguided fools he falls into his "Black brotha' slang-talkin' urban jive."

The kid who claims he grew up watching the Sunday morning news shows, went to one of KC's elite private prep schools, then on to the Ivy League, wants KC's urban youth to believe he's one of them, gettin' jiggy with it!

Do you think Quinton is committed to KCMO's Eastside? He owns no real estate, isn't married, has no kids in KCMO public schools, lives in a City-owned building that doesn't pay property taxes, pushed for an East-coast White Jewish City Manager, and gets almost all of his contributions from wealthy White Business people who reside outside Kansas City.

QUINTON IS A TRANSPARENT FRAUD...you just have to take 1 look.

When's he going to apologize for supporting Donald Trump?

Let’s just name a street after a dead fat lying turd like MLK.

Quinton appeared the better choice over Jolie "Social" Justus, but I agree that he has been a disappointment.

NO city services = NO peace

It’s time for more “peaceful protests” or is it “candle light vigils” now?

You never H8ed Trump until you were told to

It took this clown this long to realize this?

I was encouraged by my "conservative" friends to vote for Lucas because we would get a seat at the table so to speak. I politely demurred. I don't vote for Democrats. Ever.