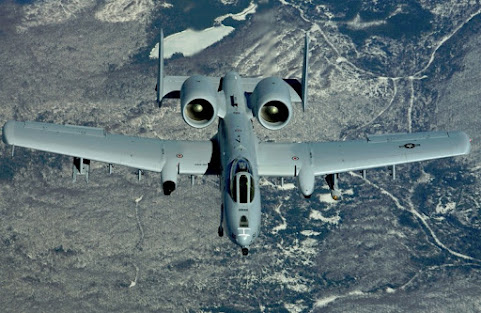 Kansas City news about yet another constant reminder of who is in charge . . . Check-it . . .

"As part of an ongoing partnership between Whiteman Air Force Base and the Kansas City Chiefs, Sunday's AFC Championship game at Arrowhead Stadium will feature another spectacular flyover before the game.

This time, the team said four A-10 Thunderbolts will participate in a flyover at the end of the national anthem. The A-10 Thunderbolt is flown by the 442nd Fighter Wing out of Whiteman."

Anonymous said…
There is another message here...they could take out Kansas City in a couple of hours if necessary.
1/22/21, 11:00 AM

Anonymous said…
I thought that these wasteful military flyovers were not going to happen under the Biden administration?
1/22/21, 11:35 AM

Anonymous said…
What ever happened to the cowardly NFL promise that the "Black National Anthem" would be played before every game?
And have the usual suspects checked to be sure that some of the A-10 pilots are black, transgender, gay, or use the pronoun "they"?
Someone call BLM!!
All entertainment, all the time.
1/22/21, 1:09 PM

Anonymous said…
Ha ha ha, the military ditched Creepy Joe, so Beijing Biden had to ride the Jeff Pedo Plane to DC. Then, after his fake inauguration he got NO salutes from the National Guard as his motorcade passed them, with the majority turning their backs to Traitor Joe. "Come on, man." "I'm Joe's husband."
1/22/21, 3:03 PM

Anonymous said…
May 10th of next year the A-10 Thunderbolt is 50 years old in US Service, and is probably the only human-piloted vehicle the Air Force has that still shows any relevance to modern combat.

Anonymous said…
We must give the military more tax dollars so they can continue their excellent job of defending the country.
1/22/21, 5:21 PM

Anonymous said…
5:29 and yet they did nothing to stop the Chinese from hitting us with the Corona virus, and killing more Americans than World War Two. Losers, druggies, and pervs.
1/22/21, 6:48 PM

Q: Why did the Whiteman fly to the stadium?

If you care about our country, our military and our freedom contact Whiteman air force base though their web page and ask them why they are doing a flyover to people who disrespect our country it's freedom and it citizens to honor the NFL for their hatred against the same. Men and women died and suffered for these filthy people to play a ball game and make millions. Why would the air force respect them?
1/22/21, 9:38 PM

DP said…
How long before the SJWs and BLM idiots demand the base’s name changed from Whiteman? Maybe the base can cuck like Dirty Kanza organizers did and change it to Unbound AFB.
1/23/21, 8:03 AM