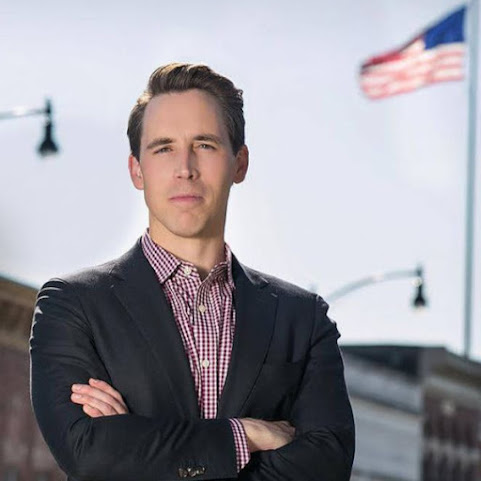 Some skeptical denizens of our blog community believe that local media outlets overlook an important Midwest power move because of political bias.

A couple of important examples . . .

We've noted that he's reaching across the aisle and is now part of the best "odd couple" in the Beltway . . .

Time: How a $1,200 Check Brought Together an Unlikely Pair: Josh Hawley and Bernie Sanders

Still, we notice a dearth of KCMO political coverage despite the dearth of hack blogs and paywall content schemes . . . One reader notes:

"(Senator) Hawley isn't getting the credit he deserves. It's a shame that his efforts are being overlooked by local MSM. If this was a young, Democratic Party leader he would be on the front page of the newspaper for his stance on the stimulus. Instead, because of his support for (Prez) Trump, local news doesn't want to give him any credit for making greater progress on the stimulus than any other elected official in Missouri & Kansas."

SNL should do a Bernie& Hawley skit!

Giving photo op speeches from the Floor is not leading.

The REAL leaders are hammering out a relief package behind closed doors.

Leading is also not Nancy Pelosi deliberately holding back the aid package till after the election, which she admitted to.

12:50 - ANTIFA is a bunch of criminal losers. We saw what they are about this summer beating up the elderly.

The problem with Congress is just as you mention; making deals behind close doors that impact taxpayers.

Most appreciate Hawley's transparency. That is why he was elected U.S. Senator for the State of Missouri.

Hawley is desperate for redemption, since he suddenly realizes that he has tied himself closely to the Loser-In-Chief, and is going down with him, like Barr, Pompeo and so many more.

Josh hasn't been able to secure a job in his hometown yet, and if there's one thing he doesn't want to lower himself to, it's have to come back to (shudder) Missouri to campaign again.

He hopes that linking his name to something as popular as some small measure of help being sent to the American People (finally) will cleanse him of enough of the stench of Trump that he can get hired and never again have to lower himself by leaving the District of Columbia.

1:36 - You really need to lay off the mushrooms. You are becoming the left-wing version of Chuck.

Thank you for describing me as an "anti-Chuck", but no fungi (or Thesaurus) involved, just reality.

Lil' Joshie is even losing the slick polished packaged veneer and starting to look more and more desperate as his situation sinks in.

Your "reality" is shared by no one else. Seek help.

This is kinda sad. I'm a star subscriber and I noticed they did write a smallish editorial earlier this morning. It was maybe 250 words and buried deep in one of their sections.

This blog post was sent by a friend. Amazing how little the newspaper matters anymore.

...............................Warning!! Whoop! Warning!! Whoop. Whoop!! Warning!!
Unemployed basement libtard imbecile Alpinista is awake and active. Be prepared for amazing stupidity. Remarks may include such terms as: CHUD, geezer, MAGAT, Maude, Trumptard and weird. Often starts with two or more silly ^^ marks. It is strongly recommended one should ignore what he/she/it posts as it may cause permanent brain damage.

Reed, you must be very wealthy to pay for the cage liner Star, or very dumb.

All the "news" is available from aggregates like KNEWS or others, for FREE.

I once had "The Star Sickness" about 20 years ago, but thankfully recovered about the time the late great Jerry Heaster left and "Lewis Diuguid DO-GOOD" started writing his liberal crap.

I hope you can also overcome your malady.

Regardless what you think of Josh (personally, I like him), at least he’s willing to work across the aisle.

@3:14, are you talking about Permanent Brain Damage that would cause you to continuously cut and paste posts that contain "Whoop?

Nothing but a political stunt. He still reeks. He's trying to set himself up for an unsuccessful presidential run in 2024.