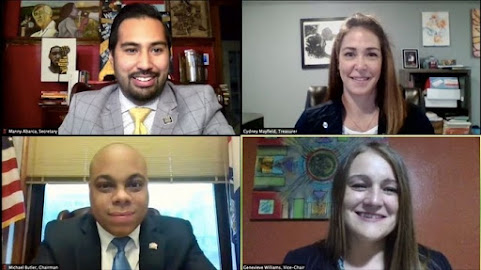 On the national level, the Democratic Party claimed an important victory with the ascendancy of Joe Biden and Senator Kamala Harris. However, closer to home Missouri Democrats suffered one of the worst shutouts they have ever endured.

Remember, in 2020, every statewide Missouri Democratic Party candidate lost. By a lot.

Overall there were no gains and the party continues to languish in super-minority status, nearly irrelevant in Jeff City.

And so, some rebuilding is in order.

A youth movement is in order and these 30-somethings seem energized. They'll need a great deal of vigor against the Missouri GOP that's also eager to rebrand themselves following the reign of Prez Trump.

Notice that a prominent Northeast Kansas City volunteer was successful in his election effort that we profiled EXCLUSIVELY on this blog.

Congratulations to the newly-elected officers of the Missouri Democratic Party! We look forward to putting in the hard work with this team at the helm.

When Jean bailed, you knew it was over for everybody.

Glad they're getting some new people. The bar is now, they can't do any worse.

Movie plot: Two white women host weekly teas in which they share community gossip and lament the antics of their Black butler and Latino gardener!!!

I won Little Big Horn by a lot!

Manny is a douche, no, he’s a double douche and a lyin cheatin con man. He serves no purpose other than padding his bank account.

His own people hate him.

the new Democrat committee listed their primary objective as:

The dipshits are worse than Jean Petersucker Baker. The Democratic Party has surrendered.

I won Gettysburg by a lot!

I won Waterloo by a lot!

I won the Vietnam War by a lot!

The Entire Republican Party and Their Flock of Sheep said...

Shhhhh, nobody tell Donnie he lost!

Go back to Grindr or Parler or whatever the gay Nazi website is called.

The thing, you know, c’mon man! help me I don’t know where my teeth are! Hahahahaha!

9:57, that entire description sounds like membership requirements for the Democomunist party.

Manny Abarca is a communist. That you think communism is funny shows how morally bankrupt you are. Shame on the Democrat Party.

How do you know Abarca is a communist?

parson was so vulnerable but the democrat campaign was weak Weak WEAK!! Galloway is a fine auditor but doesn't have the bullshitter in her like Parson. she didn't have the attack dog in her. that is fine. so where the hell is one democrat who can create a message against this arrogant cattleman who is governor because of revenge porn?? pathetic. there is nothing even resembling fiscal conservatism among the republican super majority. all they are doing is wasting one-time federal cash with zero oversight. they did not furlough a single state employee even though the state economy was basically closed april may june july etc. "run the government like a business" what a crock of shit if you believe a thing these fake conservatives tell you.

Dim0crats are the problem. Liberals are the enablers,that cause cities slide into shithole status

At least if Manny is busy statewide, he'll have less time to screw up his own neighborhood.

Yeah, a real cross section of our city. Racist bigots