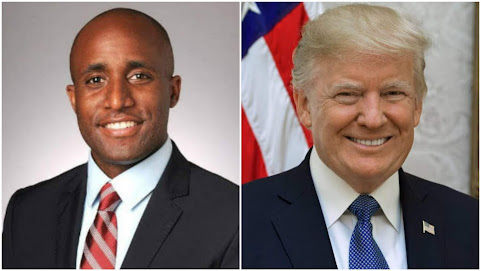 "A few have sent info my way about a "Stop the Steal" rally featuring pitchforks and the like coming to Kansas City this weekend. We are aware. All have speech rights and Kansas City will make sure folks can exercise rts safely and will ensure safety for non participants as well." 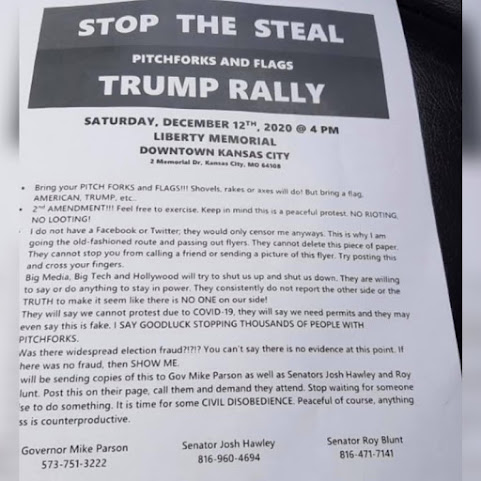 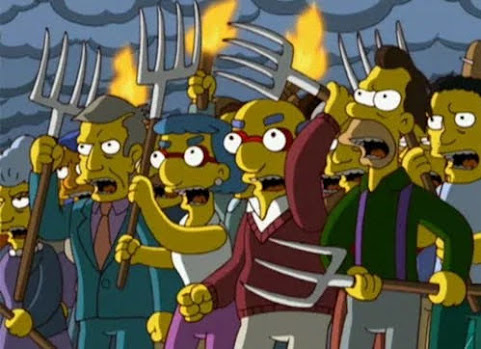 Quinton is dismissive of the entire city.

Whiny MAGATS having a snowflake convention? Trying to impress Dear Leader? God damn, what a bunch of gutless pussies. LOSER PARADE, EVERYONE!

And I don't think much of the Mayor.

Another Covid19 super spreader event. Nobody cares about those devils.

"Texas does not seek to have the Court interpret the Constitution, so much as disregard it."

We've gone for years without a President. It's time for a change.


Warning!! Whoop! Warning!! Whoop. Whoop!! Warning!!
Unemployed basement imbecile Alpinista is active. Be prepared for amazing stupidity. Remarks may include such terms as: CHUD, geezer, MAGAT, Trumptard and weird. Often starts with two or more silly ^^ marks. It is strongly recommended one should ignore what he/she/it posts as it may cause brain damage

Trump's claims are going to be rejected. Don't get your Hopes up. Better to deal with reality than carry a pitchfork or a rake like some kind of idiot.

I can only hope that this is some kind of false flag BS recruiting scheme for a multi-level marketing company. Anybody to show up to this kind of silliness is probably one of the most gullible fools in Kansas City. Vote for who you want to I don't care, but backing up some insane election overturn effort that's lost every court case is absolute lunacy.

A friend of mine was once considered for position of the Supreme Court. However he says that the court will spend more time writing a scathing response as to why the case is invalid, filed wrong, and had no material items to discuss than actually discussing any merits in the case. Case won't be accepted.

if i understand what i've read in the past is that if this ploy works what happens is that trump still doesn't get to stay. biden doesn't get his chance and the new president would be .......... ms. pelosi.

now, which puppet master gave pelosi the idea to retire?? from her current job a few weeks ago? is she not that smart to not want to hang around?

4pm downtown...liberty memorial. Why not 10 am?

That retarded piece of paper literally says "if there was no fraud, then show me".

How fucking stupid are Trumptards? Are they actually retarded. I think we all know the answer.

You claiming this stupidity Trumptards?

Too late 12:40, the MLM in play currently is Trump's scheme to, very successfully I might add, bilk supporters out of hundreds of millions of dollars while pretending these case have a snow balls chance in hell.

It's working wonderfully and Trump has grifted upwards of $170M from these dumbfuck MAGATS.


China Joe spent 8 months hiding in his basement; slobbering tapioca out of the side of his mouth while messing his Depends and taking bribes from the Ukraine and China.

Shows you how worthless and biased Corporate Media has become.

Kamala Harris is VP because she launched her political career fucking a married man 40 years her senior while he was the Mayor of San Francisco.

The Scientists who developed the corona virus vaccine should be the Time Magazine people of the year.

DON'T YOU LOVE A MAYOR WHO CAMPAIGNED ON AFFORDABLE HOUSING WHILE LIVING IN A CITY-OWNED TAX-EXEMPT UNIT, WHILE THE COUNCIL JUST VOTED TO INCREASE THEIR TAXPAYER-PAID SALARY?
Mayor Lucas will be making $141,455 per year, plus other allowances.

Please remember that during the mayoral campaign, it was Quinton Lucas who spoke aggressively and often on the need to reign in the practice of subsidizing real estate developers and the status quo who milk City Hall. But who funds Quinton's campaigns?

No one is impressed by the imbecility of KC’s boy mayor and he ought to busy himself with the tasks of running a city rather than expressing opinions about national politics. What part of nonpartisan does he not understand?

Did you ever actually learn English?

And TIME, like you, is partisan far past the point of total irrelevance.

Professor McDrinkerson! Are you trying to lecture? Who in the hell takes you seriously,kiddo? Lol

This is truly the worst mayor in recent memory, of course what choice did we have? YOU GET WHAT YOU VOTE FOR!!!!!! Wake up KC!!L

This Mayor is ruining the City.

Democrats and their voters are the most clueless, ignorant fucking idiots in the entire nation. Once we have open borders and illegal aliens' welfare on taxpayer's backs, mass crime, homicides, carjacking, burning of cities, and riots due to the defunding the police to satisfy the Marxist BLM movement, High energy bills thanks to the green new deal, mass layoffs of employees and the replacement of them for third world H1-B Visa workers, mass unemployment of blacks and other (legal) minorities, all hell will break lose all because of 'orange man bad'. There will be mass exodus from dumbass democrat run cities, leaving them to rot in their own wasteful, 3rd world policies. There will be mass civil disobedience, secessions, and chaos once the democrats try and implement their globalist, socialist, and nation killing 'great reset' agenda.

Your emperor has no clothes Kansas City. If you haven't figured that out by now you never will. It's fun to watch him blunder, bobble and waffle now though since he has ZERO control of my life and I don't have to pay for the disastrous mess that he is compounding with decade upon decade of foolish decisions from previous grifters. 😏🍿🥨

On your knees you filthy MAGATS, Supreme Court just smacked Dementia Donnie’s last hope, and by proxy, yours. The courts knocked him and his “elite strike team” the fuck out. You lose MAGATS! Donnie goes down as one of the biggest Presidental losers ever! Hahahahaha’