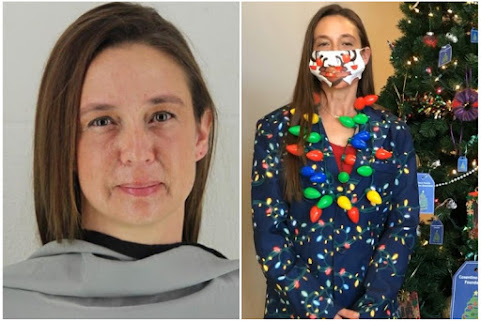 Midday newsflash: The politics of the Golden Ghetto are nothing more than sound & fury signifying nothing.

Here's an example from a glorified blog . . .

"A notation on Johnson County District Court records online indicate that (Mayor of Shawnee Michelle) Distler has applied for diversion, which means the charges ultimately could be dropped if prosecutors agree to it and she successfully completes a diversion program."

The rampant middle-class speculation, intrigue and political machinations of our Golden Ghetto pals are all for naught and might not be anything more than a footnote in the public record.

For the most part this is good news for everybody but the 3 dozen people mistakenly paying for a subscription to the Shawnee Mission Post which also attempted to bury the inconsequential reality of this kerfuffle in order to play "journalist" for country club pals.

See? Grease my palm and I’ll grease yours. That’s the MAGAT way.

^^^She's a Democrat. Your brain is teeming with Magats.

SMP is a no nothing rag ran by a truly, hateful, woman abusing jackass. No wonder his wife has mental health issues.

Diversion... the criminals hat trick. Works every time in prospecting offices with lazy lawyers on payroll. Commit a crime, get charges, apply for diversion. #rinseandrepeat

She needs to keep wearing that crazy top along with the strings of Christmas lights and the mask that goes with all of this.

2:13 that explains why she got charged doesn’t it, if she was a demoncrap the media would have lied and called it fake news nothing would have happened to her at all.

So as does the KC star... so sorry

Bullshit. Everybody gets a one time diversion in KS. Pay the fines, do the classes,do the service, probation. It happens everyday. And Its tougher then MO.

She deserves another chance.

Typical DAMSEL behavior by Michelle Distler--always begging to be rescued.

Where is Shawnee Ray's apology?
Or for the other 33 witnesses??
Including the daughter she blamed for hitting send while Michelle was having a "very long lunch".

For the record, she USED to be a Republican, but registered as an Independent before the mayoral election. And started kissing up to City Staff and the socialist sorority of four liberals on the Council. The appearance of being neutral and beloved by all.

The only reason she was re-elected was her overbearing opponent was less likeable than even Kamala Harris. Michelle Distler is about as fake as Dr. Deborah Birks.

Where is the restitution for all the wasted time spent by the prosecutor's staff? And the AG's? All she had to do was ask the City Attorney or the AG in advance if anything was illegal. And if she sent an email by mistake, she could have just RECALLED it.

Instead, she lied. She pretended she's a "whistleblower" but was afraid, this time, to report ACCUSING FOUR OF EIGHT COUNCIL MEMBERS OF A CRIME THAT NEVER HAPPENED. And then illegally submitting it under watchdog Ray Erlichman's name? And then lying to detectives that "she just wanted him to know about it". Bullshit.

And then pretending she didn't know what a Captcha is? Distler is a project manager for Risk-IQ, a SF based CYBER SECURITY firm with 6000 employees. During her bought-and-paid-off diversion, will Risk-IQ now teach her why using the internet to electronically forge a signature is illegal? And that lying about it is perjury--which is how she was charged?

Last week, when once again it was time to elect a new Council President, Mayor Distler refused to break the tie. And left it up to a coin toss. Yet still accepts her full salary.

(Remember, a year ago, she was also a coward on this, and forced the city to not only rewrite an ordinance but revise the actual City Charter, so she does not have to DO HER JOB AND VOTE.) And sensing that experience of banging the gavel and setting agendas by council members might lead to another opponent like Stephanie Meyer, Distler cleverly changed the charter to prevent any council members from leading committee meetings. She does it now.

If one can leave governance up to a coin toss, then just change the charter and totally eliminate the council. Give the city staff a stash of nine quarters. $2.25 =one for each of the eight council members and one for the mayor. Let the tax and spend staff just stand in a circle and toss coins to decide which developers get abatements for fake "luxury apartment complexes with carports". Or going $500,000 overbudget for Nieman Now, the four year $3.5 million debacle--Joco's slowest AND most unimaginative repaving of the ugliest street in town for Old Shawnee Pizza and McLain's Market. Now with buried power lines. And a bench so overtaxed seniors can get splashed by slush from passing cars. Woohoo!

Make no mistake. Michelle Distler is not gonna serve diversion time because she is SORRY. She is only sorry she got caught doing something no sober citizen would do--accuse four elected officials who are tax conservatives of crimes. She BOUGHT her way out of this quagmire, by hiring the most expensive white collar defense attorney firm in the metro.

One more question. Is it ethical to date a fire captain when you control their department's budget? Might or might not be legal, but is it ethical and "transparent"? Asking for a non-friend.

What we know about Diversion is that once you meet all the requirements, the charges disappear from the record as if it never happened... making the criminal eligible for future diversion. I don't like diversion. People out to be charged with their felonies and suffer the consequences...

do you think this case will go to 'diversion'? prosector has to agree and sounds like some may be upset

and what is it like the bad check class that she has to sit through to get the charges reduced? it's still politically a shit sandwich, isn't it?

more dishing on this hyper local, mean nothing to non-shawnee people please

Of course if this were the mayor of KCMO now making a second accusation of a crime by 4 conservative council members this would be of great interest!

Similarly if the mayor of KCMO made a charge that the police department damaged his door when they came to investigate well BLM and the STAR and local news stations would be all over that now wouldn't they?
And if the mayor of KCMO had asked the City attorney for an opinion about whether something might be illegal and the City attorney refused to answer and just said well just file the charges with Jean Peters Baker then the media would be very interested in that.
One wonders if Steve Howe the district attorney for Johnson County really wants to grant diversion to a repeat offender just because they hired the biggest white collar criminal defense attorney in town. Just how many times does one allow an elected official to make such false charges and then present a totally specious defense.

What might be useful terms for diversion? Would any admission of guilt be required would apologies to the elected officials falsely charged with a crime be required with sobriety tests or psychological counselling be required?
I guess we shall see.

Insightful comments, Tracy. Bottom line: the voters need to remember this mayorial trainwreck at the next election time. Her actions wasted how many investigation, law enforcement and prosecution dollars, as well as man hours. Also, the fact that the mayor's day job is as a project manager for a cyber security firm should give one pause. I will post this using the CapTCHA feature below, so easy!