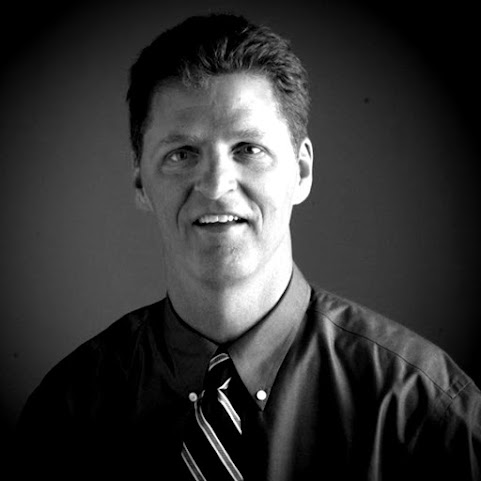 In his latest newsletter to patrons of local public radio, Steve Krakse seemingly attempts to prove that he's the worst journalist in Kansas City.

AMID ALL OF THE WORLD'S SUFFERING, KRAKE PLEADS FOR PRICEY TOW TRUCK CLEMENCY FOR HIS ADULT SON!!!

It's kinda sweet. My parents have bailed me out of seemingly INFINITE car problems.

But it's not news.

Even as a throwaway social media post, the story isn't worth sharing with strangers.

DURING THIS SORDID TALE, KRASKE INADVERTENTLY REVEALS HIS FAMILY MIGHT BE ONE OF THE MOST ENTITLED IN THE KANSAS CITY METRO!!!

People get towed all the time.

"The cops tow your car when it's a danger to other people. How does a big-time political columnist possibly use this common occurrence for his newsletter?"

My son was parked illegally. No doubt about it.

Michael lives in one of the Mac Properties apartments near Gilham and Armour. The neighborhood is dense with apartments, and residents vie to park on the street instead of paying extra for a reserved spot.

One day, Michael parked at the end of a block with his car partly blocking a sidewalk. Street parking is so limited that residents often park in the same place. I’ve seen their cars when I visit.

Listen, I get rules. But this was nuts, especially because the situation never would’ve happened had your friendly police department simply left a note on the windshield saying the next time you park here, we’re towing this sucker.

That, apparently, isn’t an option. A police spokeswoman told me the department doesn’t issue warnings.

What you have here, then, is another way our city profits off middle- and lower-income residents who are the ones living in Mac apartments. Well-to-do folks living at 53rd and Wornall don’t need to park in the street. People at Armour and Gilham do.

Check the full story via screencap . . . 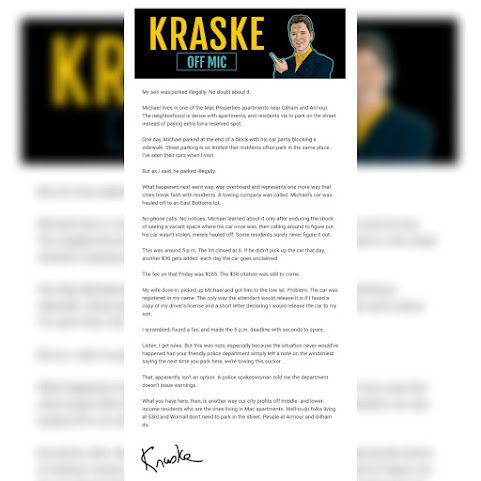 IN A CITY WITH A RECORD HOMICIDE RATE, RAMPANT RACIAL AND POLITICAL DISCORD, A BUDGET CRISIS AND CRUMBLING INFRASTRUCTURE . . . KRASKE'S NAVEL-GAZING SPITS IN THE FACE OF EVERY JOURNALIST, WRITER, BLOGGER AND READER IN KANSAS CITY!!!

And this dude TEACHES NextGen reporters at the city college.

They might want to ask for a refund if this is the level of skill demonstrated by their professor.

Nothing about the screed is fun, captivating or worth mentioning. TKC has posted stories about puppies and other doggy-style tidbits that have more redeeming journalistic value to the discourse than Kraske's parking problem polemic.

The claim over alleged injustice is cringe-worthy and only serves to demonstrate that the leaders of the mainstream Kansas City media have completely lost their edge and live inside a bubble that is impenetrable to real world problems.

Don't be jelly. Kraske is simply having a dad moment and trying to embarrass his son into never parking like a schmuck again. Good for him!

I imagine that steam is coming out of TKC's ears as he wrote this. Calm down, dude. All newsletters are throwaways.

Kraske's first world problems should be all of our concern! God save the Kraske!

Would that be "Karen" Kraske?

Yeah towing illegally parked cars in dense neighborhoods is a new phenomenon. It just popped up.. like 75 years ago. I would bail my kid out too. Probably would tell him he is an idiot though, and not write about it.

MAGAts crying about the rule of law. How rich...

Kraske says “our city” profits! It’s not his City, he lives in Kansas and always has! Please stay in JoCo, and confine your opinions to issues your fellow suburbanites care about!!

Great job towing the car. I just wonder if it a Kansas license plate.

It’s clear that we must defund the police, starting by eliminating all parking control officers.

No property for Kraske in Jackson County. Can Steve explain how long his son has lived in KC. Evading property taxes is another crime. Doesn't his son want to contribute to KC.

Why should he? Cleaver and White don't.

He thinks the police should just leave a warning, in case the car belongs to a white man.


So wait a minute. This guy gets a parking violation but the Sambo's down at power and Light get away with blocking streets and doing doughnuts. Think about all those corporate people who stay down there and eat dinner at the P&L dist. Something smells with this crap. Since when does the police let the P&L dist go but has time to check bad parking in Hyde Park? And everyone thinks the black people are so mistreated? BS Call the idiot who put the bike lanes in and the idiot sly james who let these apartments go in with no plans for parking. Sorry but I have to agree with this guy.

I would be pissed if I didn't know you were joking TKC. You magnificent bastard.

Gilham and Armour is screwed. Thank you Bike/Walk KC.

Okay, I'll bite. Plenty of dimwit and petty comments on here but you're all overlooking one thing. Kraske is 100% correct and he's basically advocating for people on the low end of the income scale. Parking enforcement targets workers more than anyone, downtown and on Armour.

It's crazy that we have these rules that are arbitrarily enforced and always in flux. On top of that we have predatory towing companies.

Steve is just sharing a personal story that illustrates what a giant mess parking enforcement has become. This is actually very good journalism.

I was laughing throughout this post! Thank you TKC! I don't think i could agree more with this post.

LOL! his kid gets his car towed for illegal parking..and he writes about "economic targeting" .. soo..not only are cops raaacist.. they also hate anybody not rich..

I remember the big uproar many years ago when a city councilman got towed out of a parking lot at Arrowhead stadium. It was big news for a week in the KC Star.

My parents have bailed me out of seemingly INFINITE car problems.

Yeah that's pretty sweet considering your Chevy Spark or whatever is IN YOUR MOM'S NAME. Way to be a pushing-fifty mommy's boy.

And yet, here you are on this blog after midnight sniffing Tony's underachieving farts. Weird.

You know, for awhile I thought that KCUR was going to replace the star as the KC news source of record but it seems like someone got their hooks into them because the qualify has totally been degraded this year. They were publishing some great articles and content but this year it seems like it's all just one diatribe after the next, very much like Kraske's towing complaint.

It's sad but I get all of my news online and so far very little is coming from sources that I once was able to trust.

Please stay in Leawood dude. Your suburban malaise is showing.

The news is the news, if you don't like it. Change the channel.

Wish my daddy would write me a letter like that too. This kid should be humiliated but probably isn't. He wanted to live in Midtown that shit happens all the time. No warnings given here, get used to it.

This would be the one and only time Kraske has ever spoken truth to power. Normally he's administering loving rhetorical mouth-jobs to the local corruption class.

Any statues honoring meter maids should be removed

Just one of the many benefits of living in an exciting dense urban environment.
It's just like New York City!
Why would anyone want to live at Gilham and Armour?
Just more suuperficial outrage and demands from one of the usual local "media" suspects.
Sad.

Yes and we home owners are sick to death of you parking on the streets, I get it that it’s a public street, but they are building more and more apartments and you can barely drive on these public streets!!!

How come that liberal fag piece of shit doesn't have his mask on in that picture?

This article reminds me of why there was basically no News Coverage of Pearl Harbor yesterday, but tons of John Lennon was murdered 40 years ago coverage today. Weird

Steve Kraske a MAGAt? I think not.

Could it be that there are fewer parking spots due to the bike lanes?

That's because there's hardly anybody alive who remembers it except you, geezer.

But hey I'm 142 years old and I still get mad when they don't mention the Maine blowing up in Havana Harbor. Damn those Spanish!

So I feel for ya.

So rather than report on something useful, like the parking variances MAC received in return for giving the crackheads the boot from these properties, Kraske whines about the treatment his slackjawed spawn gets. Sounds like parking control is doing Kraske's parenting here.

"Steve Kraske was a long-time political correspondent and columnist for The Kansas City Star. He is also host of “Up to Date,” a daily talk show on public radio KCUR-FM in Kansas City and has worked as a political analyst on Kansas City television. He has covered every president since Gerald Ford, seven national presidential conventions, the Iowa caucuses and numerous races for governor, the U.S. Senate and Congress. He was a 1992 John S. Knight Journalism Fellow at Stanford University and holds his B.A. in journalism from the University of Wisconsin-Madison."

Maybe if your son wasn't such a cheap ass he would pay for a reserved parking spot Steve/ Ever think of that?

Kessler is a liberal cunthole.

Sounds like his kid needs 6 month of remedial parking classes.

It's ok. Daddy will fix it for you because he's a big bad journalist on a low wattage FM public radio station that nobody listens to.

Consider $265 a cheap lesson compared to the high prices charged by some vulture scumbag towing companies, one that is located in Riverside.

What a great story at Christmas; I nearly teared up.

So the kid was too cheap to pay extra for off street parking, and Daddy would not pick up the tab. That sort of takes the edge off the sympathy factor.

I think Nicholas needs to move back to Belinder with dad. He's a 26 year old child.

Typical liberal: rules don't apply to me. Even though the "rules" are plainly stated in red lettering.

If you don't want to pay for guaranteed parking then you take the gamble with street parking that you won't always find a spot on your block --- you may have to park a few blocks away.

journalism hint: this is not man bites dog. it happens everyday.

7:55- so your point is that no one should remember and honor basic History? Are you the same dumb fuck that thinks Slavery is responsible for all the ills of Society ? And therefore you bring it up 24 /7. It's called History and everything has a past. While you might not have a future. You know you have a BLM support sticker on your Prickus.

To 9:15, Karen Kraske is the perfect name for this ass clown!
9:32, we don’t want him! Please drag him across State Line and let him shack up with Junior among the people he champions, yet doesn’t want to live near.

Krapskey is a clown.
How does he equate his white ass privilege with his son’s dumb mistakes?
What an idiot.
I know of no one else that would exploit a sons stupidity for journalism gain (or loss).

Perhaps Krapsky should be defunded.

Call Krapski today and demand his resignation until he apologizes for being a nincompoop.

Someone look up Nicholas Kraske in Missouri Courts and Johnson County KS! Wowee dad. You have other issues to attend to. I'd stand down if I were you.