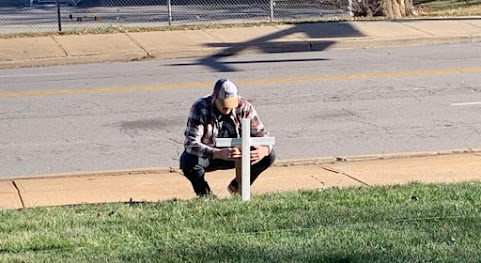 Right now we share a very personal perspective sent our way that provides a powerful message as people of faith work to change hearts & minds in the midst of a Kansas City murder crisis.

It's worth noting that their numbers contradict the 170 total by KCPD but we're giving them the benefit of the doubt because these are church folk and they're not really politically motivated.

The consistency of their Kansas City call to prayer is to be commended and we think the message is exceptionally important as they offer tribute to all of those killed violently this year. 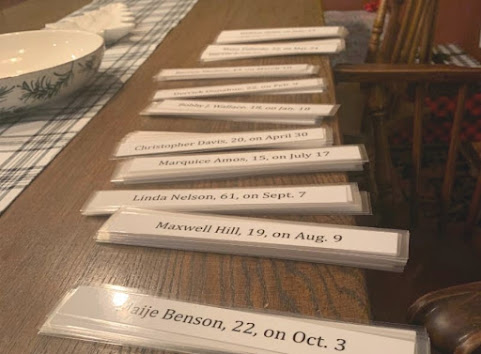 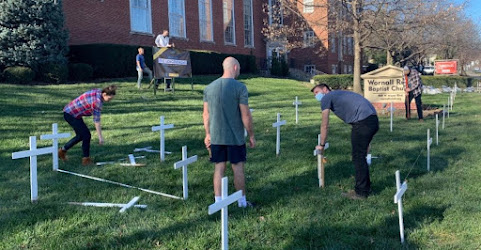 That’s 176 murders this year in KCMO alone - not the entire metro- just Kansas City Missouri which has a population of 495,000 people.

As we placed the name placard’s on each cross what struck me was the young ages of most of the victims including children as young as one.

The news media came out today and took footage of these amazing young people putting up these crosses. They interviewed Rosylin Temple, Rosylin is the director of mothers in charge which is an organization of the parents of murder victims.  A couple of TV stations played a brief story about this on one of their newscast. But none of them carried it on all their newscasts and several others didn’t carry it at all.  Several of the reporters remarked that they’ve been covering this event for 10 or 11 years.

In other words 176 murders - a records number isn’t all that newsworthy because it’s really not that unusual -  I realize tonight in this city it’s become the norm. And we can’t allow that to happen.

Each one of these crosses represents a siblings, parents, grandparents, children of these murder victims who are in unimaginable pain across our city at Christmas.  I’m so grateful for churches and people of good will that are coming together to let these folks know that they are not forgotten. Every citizen of the city deserves the right to live in a place where they don’t have to fear violence as a way of life.

Local just wants happy and sensational stuff around the holidays.

This is actually community news where our friends and neighbors want to make our part of the world better. Of course it gets pushed under the table.

If that's true, then it has to change.

The way things are going. That number will probably be a few higher by tonight.

It doesn’t fit the local news’ trendy “wokensss.” Reporting facts would be racist.

"Every citizen of the city deserves the right to live in a place where they don’t have to fear violence as a way of life." Most of the 176 shooting victims did lead lives of violence. Drug deals, thefts, gang wars, revenge led to their violent ends. Had they chosen different paths, most would still be alive today.


I know how sad this is that our nation is fast becoming a third world country. People need to understand that we have a mayor who doesn't care, football players that have no clue what is going on except to spew racial prejudice, and a city full of people who are so stupid they voted for a our jobs to stay in China and for China to come here and buy up our country because they can't feed their own people due to lack of farm land. So don't expect it to get any better but only worse. Oh and then there's the people who are so stupid they blame Trump for an Amazon Truck getting stolen.

Well, it could be worse . Thankfully, our hood rats here are inept and unmotivated. In real murder cities, Baltimore has 314 murders and Chicago has 754. St Louis has 250. We aren’t even the murder capital of our own shithole state.

Did I miss the last six murders? It was 170 yesterday, Don’t tell me, they added the idiots that deserved to be shot by the police didn’t they.

Jean Petersucker Baker will bring these murderers to justice. They are going to bet some serious probation.

Professor McDrinkerson! Put down the booze, stop closing businesses and playing dictator, and at least pretend to do something about the nonstop murder spree!

America has been destroyed by MAGATS and cafeteria Christians. Fact. Trickle down economics decimated the middle class.

Endorse Gangsta Culture and endorse the Drug Trade, make excuses for the group responsible for the majority of the murders. Poof, you have a high murder rate. Blame everyone and everything besides whom performs the murders. It goes away in the smoke screen. Feel good about your backing scam organizations. True Dat.

Despicable dimwits ruin everything they touch, can’t wait for China joe to sell us out to communist China.... again

"Every citizen of the city deserves the right to live in a place where they don’t have to fear violence as a way of life."

And that place is somewhere else. Call UHaul.

Probably a few victims' families, OF THESE VICTIMS, not so sad.

The local "media" have an agenda and a narrative and accurately reporting KCMO homicides and identifying those who commit the vast majority of the murders is not a part of their make-believe "woke" stories.
Anecdotes about racism in the fire department? Big-time multi-day story.
Made up tales of police brutality? Can't get enough of those.
"Entrepreneurs" of color? Endless features.
Actually trying to find out what's happening in KCMO and reporting the NEWS? Way too much work.
And the downward spiral continues unnoticed and unabated.
Sad.

They should be frustrated
Because instead of preaching morality and self control, they’ve been all in with politics and division
So it should be no surprise that yet another generation has grown up not knowing right from wrong

Start your own news outlet and let us know how it goes, 7:20, we'll wait. For a clear genius like you it will be easy.

We are gonna need a bigger boat.

Orange you glad to know that despite local media being sour, and KCMO political leadership being a lemon, some thoughtful people still pay their respects to victims of the KC genocide???

Everybody is shouting "Do Something About the Murders". What? Suggestions are welcome.

Next year there will be 251. As Biden allows Super predators to be released. Feeling bad that his family once owned Slaves. Like Kamala's Family did.

Start by calling out the black community instead of pretending it’s not happening and if you ignore it long enough it’ll go away all by itself amirite! Hahahahaha!

Traitorous MAGATS should be shot on sight by Federal troops.

Okay, I'll bite. Bring back the law of Moses, the old testament stuff. Don't like Christians? Bring back the law of hammurabi where a flourishing society lived in peace and freedom with only around 170 laws, most ended with: shall be put to death. Murderers, rapists, drug dealers, those would become very undesirable trades if punishment for getting caught was a fast tracked public hanging.

Glad there are people don't this. Wish they could get more opt in from our community.

Hope they bought more than 178 because they're gonna need them.

Good to be in the cross business.

I noticed in other cities that drunk people are more likely to pick fights.