Recent legal opinions and political provocations of Mayor Quinton Lucas on the topic of police "local control" have infuriated Republicans at the state level.

As usual and behind an MSM paywall, the mayor talks tough for a friendly audience . . .

Could KC sue for local control of its police department? Mayor says it’s worth exploring

“I think that Kansas City, Missouri, or a set of plaintiffs … should actually consider pursuing litigation to get us out of this situation,” Lucas told The Star Editorial Board.

He argues that the current governance model for the Kansas City Police Department violates the 14th Amendment’s Equal Protection Clause, which prohibits state and local governments from denying any individual equal protection of the law and which has been essential to the protection of civil rights."

"The mayor obviously doesn't know what he's talking about . . . Or he's being extremely disingenuous by sharing his legal opinion. The current governance structure for the KCPD absolutely meets the requirements of the Equal Protection Clause and has withstood the test of time and repeated legal review. No one is being denied due process or equal representation. Even the geographic example the Mayor gives is irrelevant -- The Northland is, in fact, represented by the police board of commissioners -- Of which the mayor is a member."

About the push for local control . . .

"He's also ignoring the will of local voters. A majority of voters in KC don't want council control of the police because they know that would be a disaster.

"Look at the Water Department, that's a great example of why Mayor & Council seizing authority over law enforcement would be a horrible idea that could destroy Kansas City.

"What the mayor is really doing is attempting to bypass voters and other elected officials by threatening to go through the courts . . . "

"The legal threat for local control is counterproductive at best. Words matter. What he's telling Republicans in Jeff City is that he wants to bypass their role and strong arm his agenda. If he's going to take the route there's so many ways the Missouri GOP can push back. From low-income housing credits to stimulus relief . . . He just picked a fight he can't finish at a time when KCMO is going to need help from state government." 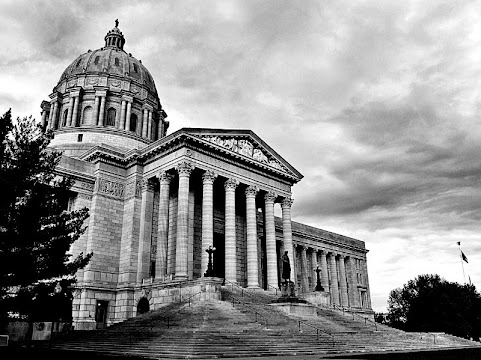 "If he wants to take this tact then he should just call the lobbyists for KC back home because they'll be shut out of every important office in Jeff City. Shaking his fist at the Republicans is just a bad idea and whoever is advising him on this strategy is doing a disservice not only to the mayor but also the residents of Kansas City."

Did you expect something more from a law lecturer? Of course the mayor doesn't have very much knowledge of constitutional law and how it works at the state and local level.

If they ever put local control to a vote in Kansas City it would lose big time.

Professor McDrinkerson! Have you been at the egg nog again?

He's being led astray by the Star. They're just using him for a good quote, he is too eager to please a friendly audience. That's always been one of Quinton's biggest faults, telling people want they want to hear.

Just another empty promise from Q. If he really wanted local control he'd put it to a vote.

Local control will lead to a low IQ black managing effort that will inevitably lead to to infighting, back stabbing and butt hurt fat brown Karen's creating a employment crisis within the department.

After all these years now it is illegal? Wasn't the police commission first set up to bring some law an order to Pendergast's hometown?

City Hall can't efficiently manage the KCFD. I can only imagine the mess they would make out of the police dept.

Go back to lecturing dipshit! You will get your ass handed to you on this just like you will over the work at home e-tax. Keep trying, you'll eventually learn boy!

What Q knows about law would fit on a matchbook cover with plenty of room to spare.

Was he born this retarded or is there a head injury that we don't know about?

Quinton, would you do yourself a favor and SHUT THE FUCK UP?

Happy new year to all especially my favorite TURDS!

The city doesn't do a good job getting the trash picked up, the bus service is falling apart, what condition are the streets in-poor. The last thing the city needs is to have more control of the police.

Perfect example of Lucas in Atlanta from NY Post:

Liberal leaders across the country (including Mayor 10-10-10) are learning the tragic price of being soft on crime.
In Atlanta, a Christmas weekend shooting spree put the total for the year there at 155 murders, the most since 1998. Among the fatalities: a 7-year-old and a 16-year-old, both girls, both black.
Yet Mayor Keisha Lance Bottoms, whom Joe Biden reportedly considered for a Cabinet post, is at a loss for what to do: “If there are solutions that we have not explored and enacted, I welcome the suggestions,” she said.
Of course there are “solutions.” But first, as they say, you have to admit the problem.
For much of 2020, particularly after the death of George Floyd, the left couldn’t stop demonizing cops. Anti-cop protests across the nation dragged on day after day. Activists launched a #DefundThePolice movement that misguided and demagogic pols embraced, even as majorities of blacks and Hispanics opposed it.
At least some are beginning to get it: In Atlanta, city council member Howard Shook blamed the spike in violence on “the steady outflow of our officers.” In Minneapolis — where Floyd died and where violent crimes have soared to 5,164 this year, from 4,097 in 2019, Fox reports — city officials who once called for defunding and dismantling the police are backpedaling.
” ‘Defund’ is not the framework the council has ever chosen,” insisted Minneapolis city council members Steve Fletcher and Phillipe Cunningham. Yet both were among nine members who appeared with a “Defund Police” sign in June and vowed to dismantle the department.
“Dismantle does not mean dismantle into nothing,” Cunningham now says.
There is no secret to controlling the violence: Stop demonizing cops. Give them sufficient resources. Don’t free violent criminals. Prosecute low-level crimes.
New York showed it can be done: Murders fell nearly 90 percent from the early ’90s to recent years, before heading up in 2020. Mayors like Bottoms (and Bill de Blasio) don’t need suggestions; all they need to do is heed the lessons of history.

Mayor 10-10–10 is too young with zero experience.
He has patently
Made crime worse.

And let criminals off the hook.

And blames the police.

And has made enemies.

And has NO plan. None. Talk is not a plan.

He prosecuted all crimes. Nothing was petty.

Cleaned up NY City until liberal DeBlameio came around.

Liberals suck at crime. And taxes. And spending.

They are great at blaming others.

Super majority Republicans can simply change the rules regarding local control. I encourage this. Kansas City should not have local control of it’s police department. However, I don’t like that Parsons appointed Tolbert as BOPC. He should not be appointed again. He’s not there for the right reason.

Of all the issues facing Kansas City this is the least of them that needs addressing. Has anyone noticed how Mayor Dinkledorf always avoids the real issues facing this town and picks up or dreams up others causes to deal with that won't in anyway what so ever improve life or the operating of Kansas City Mo.

Unethical and bad behavior significantly increases the chances of destroying all that is good and replacing it with all that is bad.

Not only totally pointless pandering to the usual suspect "activists", but digging the hole with the Missouri legislature even deeper than Sly.
Lucas seems to have no real understanding that state legislatures are legally able and even obligated to direct and either expand or contract governance options for cities.
Just like Missouri allows for earning taxes and Kansas does not.
There's no chance that local control of the KCPD is illegal and all smiley selfies Lucas has done is to make it that much LESS LIKELY that the folks in Jeff city will be interested in doing much of anything for KCMO.
Trading away, once again, the best interests of KCMO residents for his idea of popularity, self-importance, and celebrity.
Clueless, selfish, and sad.

Joining protesters
Letting criminals go free
Denigrating the Police
Not partnering with Republicans
Bad mouthing Trump ( just more than 65% votes for him here)
Horrible financial decisions even with Covid.
Attempting to collect 1% from people who neither live or work in KC.

The legacy will be:

As the world turns- the head-scratcher Mayor 10-10-10 wonders aimlessly doing much of nothing for the dog gone poor citizens as crime rages and America sees another liberal failure.

How about local control of ....

Mayor Koch? I think you're mixed up old timer.

Jefferson City, Missouri as the capital of the state of Missouri has requested for the county executive as a candidate to release the financial records from the Missouri department of revenue.

Each candidate was required to turn in their financial forms from the Missouri Department of revenue to the Missouri ethics commission.

Once the capital of the state of Missouri has reviewed any previous financial statements as a candidate of the county executive in Jackson County, Missouri.

Jefferson city, Missouri that’s located at the capital of the state of Missouri and once they have reviewed any financial statements then they will add the name to the ballot for the people to decide on who they want as a County executive.

They Kansas City, Missouri police department can answer to the county executive.

When the amateur law lecturer picked an unnecessary fight with the state legislature, he neglected to consider that they're already planning to dismantle the KCMO 1% earnings tax, KC will definitely be bankrupt when forced to refund 2020 work-from-home non-resident earnings taxes, and the next renewal vote is in April 2021!!!

And the KC FOP backed this clown. Good news they may get new leadership.

Increase hostility all around!

Yep, but we do have an LGBT commission and BLM protesting all Summer. What else could one want in Our Metro ?

Mayor, I would like to sniff your sweaty McNuggets !

The Mayor and City Counsel should be required to wear body cameras.

Vote NO on the earnings tax renewal.

The mayor and clowncil members should wear suits like NASCAR drivers so that everyone can see who bought and paid for their asses.

Since when did Lucas give a rat's ass about the constitution? 1st, 2nd, 4th, 5th be damned, but the 14th can be stretched to mean anything? I thought the assertion of his BLM buddies was that the constitution itself was racist, so how can he use a racist document as a standard? For an ivy league attorney, he's an idiot.

Every day I pray that the State Legislature saves us from the depradations of our horrible City government.