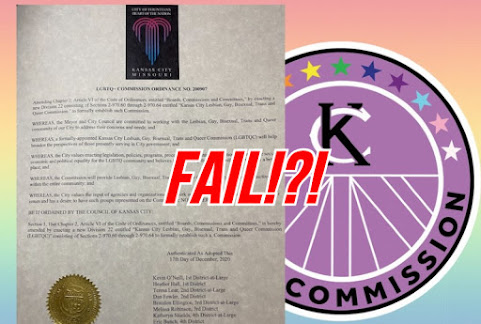 An effort to entice greater representation at 12th & Oak has exploded in the face of city hall politicos.

KANSAS CITY LGBT LEADERS DID NOT TGIF AFTER THE COUNCIL VOTED TO UNDERMINE A LONGSTANDING LOCAL COMMISH AND PROMOTE THE CAREERS OF 2020 PROTEST POWER PLAYERS!!!

The hot take sent our way was quick and to the point . . .

"The Human Rights Commission that we’ve had for years at City Hall is already covering this."

As always we dug deeper and reached out to a few local LGBT leaders to garner a better perspective on this hot mess in the making . . . Here's the word . .

"The Mayor & The Council have their right to play favorites but this is disgusting. They're undermining the work of hundreds of people who have volunteered and devoted their time over years just to give one of their friends a soap box with absolutely zero responsibility. The arrangement isn't equitable or just. From what we can tell, the KC HRC will keep doing the work and then the 'commission' will simply take our findings, outreach and contacts and use them with our without including a more diverse cross-section of the community. It's a hostile take over and nothing less. We'll wait to see how this plays out but already it's was horrible to see that the mayor & council did this without any discussion. If this continues, I know that at least half of the volunteers are ready to opt out."

A few of things to remember:

- The city’s Human Rights Commission voted not to recommend a proposal for the new group to the City Council.

- Council Lady Katheryn Shields was rebuked for suggesting the LGBTQ+ Commish operate under the HRC.

- There was no public testimony allowed before the vote.

Sadly, the effort at "inclusion" has served as a "slap in the face" to many volunteer who see this move as the mayor & council attempting to subvert established Kansas City LGBT leaders and install their own far less experienced representatives.

It's not my "community" but I recognize the pattern. Mayor and council don't listen, they want to dictate and only work with people who will tell them what they want to hear.

They do this with neighborhood groups too.

This council is one of the worst, you can tell such little thought went into this.

C'mon T. Release the kraken. This is just the political side of it. You know the story. It's about Q having another man crush. That's been the story behind most of his hires.

It seems a lot higher than 5% if you go downtown. It seems like about 80%. Or Westport or the Plaza. Thirty years ago, we had a few queers but they appropriately tried to hide it. Now they’re everywhere.

I am a normal white man who works hard and pays taxes and tries to do the next right thing. I don’t have sexual intercourse with other men. When do we get a commission to represent people like me? We have zero representation.

It's 10%. You seem to think that everyone who doesn't look like a red neck is gay. You need to grow up, & STFU with your ignorant shit.

You are not magically a better person than they are.

Every single council member is a worthless piece of shut. So is our mayor. Is it any wonder Kansas City is so fucked up??

50% of KC men are turd pushers

The council members are pieces of shit.

Q could screw up anything. Just one more example.

Professor McDrinkerson starring in yet another of his near daily failures. Go back and be an adjunct, Professor!!

No wonder companies don't want to relocate to this shithole of a town. I sold out and moved out.

^^and yet you're STILL here. Pathetic loser. Weird.

Pathetic weird ^^ gayboi is up.

The weaker and malcontent you are the more useful you are to the (((globohomo))) agenda.

^^says the geriatric fucktard who sits in his dirty diaper all day being a shithead on a blog.

Between the homophobes and the racists it's just another Tuesday at Tony's Kansas City.

How does a man look at another man's hairy ass and find love? How does that work 11:08? Enlighten us on your chosen lifestyle please.

Yes chimpy, tell us what turns you on about pushing turds.

10:41 and yet here you are again TODAY as EVERYDAY trying to dispel the real truth of what's happening in and too this town. You Pathetic loser. Weird.

This move has NOTHING to do with concern for the LGBT community, that's why the HRC was established long ago and to the extent of its responsibilities, it functions as one would expect.

This move is one part "look at the shiny coin" and one part "a job to shut you up". The City is faces imminent bankruptcy and/or MASSIVE budget cuts, and everyone knows that there is no impending bailout coming from the state or the feds. Our City "leaders" need to distract as many as possible from that truth, and the best way to distract people is to get them all worked up about something else. In this case, the distraction is a new and toothless commission that steps all over the toes of an established group... and whallah, instant infighting and plenty of distraction.

The other part of this move is keeping Justice Horn pacified. He still had a little BLM ammo in his gun, and the council members needed him to keep his mouth shut to avoid any more conversation about them playing both sides of the ball. Now that Mr. Horn controls a commission, he's on their team and has plenty of incentive to stay quiet and milk the inevitable flow of City dollars to come.

What did one gay sperm say to the other?

"How are we supposed to find an egg in all of this shit?"

And yet the City spirals down toward bankruptcy and the crime rate spirals upward. What the hell are these idiots going to do when the earning tax fails to pass next year.

Ready! Fire! Aim!
AGAIN.
Poor 'ole smiley clueless Lucas has no strategy, no priorities, and not a single original idea can be found.
He's just a weather vane spinning around with each even slight breeze that comes from some "victimized" or special group and just can't bring himself to say NO to anyone in front of him.
But when you have no agenda of your own, anything else might look promising at the time.
And each "position" that he's taken has either been forgotten or reversed in no time at all.
It would be funny to watch if what passes for city government in KCMO didn't so adversely affect the whole region.
But instead it's sad.
Pitiful, actually.

I am a black skinned, handicapped, trans lesbian eskimo who identifies as mermaid. You should just make me your leader as I am the most diverse person EVER! Now bow to me.

12:57 you should run for mayor or Jackson county executive! I bet you’d win in a landslide! Lmao!

The question is, how much does it pay, and can they pick any color of Escalade they like?

12:57 you're the first ever five-fer. Any job you want is yours for the asking.

Commander in Chief Joe Biden last seen shitting in the corner of his basement is missing.

Please contact Doctor Jill Biden if anyone knows the whereabouts of China Joe. No questions ask; just please make sure he has his Depends on upon return.

Oh and hell yes you can have any Escalade you want!

U.S. adults estimate that nearly one in four Americans (23.6%) are gay or lesbian. Gallup has previously found that Americans have greatly overestimated the U.S. gay population. In 2017, Gallup said it was likely 4.5% of the US population.

Hey, maybe it is 10% when you add all your pedo bros that want inclusion and validation in LGBTQ? How about merging LGBTQ and NAMBLA to make LGBTQP?? Then you'd only have 1 meeting to attend weekly at the gloryhole.Hahahahahaha

U.S. adults estimate that nearly one in four Americans (23.6%) are gay or lesbian. Gallup has previously found that Americans have greatly overestimated the U.S. gay population. In 2017, Gallup said it was likely 4.5% of the US population.

Hey, maybe it is 10% when you add all your pedo bros that want inclusion and validation in LGBTQ? How about merging LGBTQ and NAMBLA to make LGBTQP?? Then you'd only have 1 meeting to attend weekly at the gloryhole.Hahahahahaha

If you're gay you have mental issues.

^^*Says the lonely geriatric posting on a blog all day in lieu of living a meaningful life. I’ll take the gays over you all day Grammy.

America has over 1.4 million businesses own and operated by LBGTQ owners. They contribute 1.7 Trillion dollars to the economy. Kansas City benefits from many of these businesses. Like it or not, gay people are more likely to have an advanced education, have more disposable income and spend their money on things. It just makes smart business sense to cater to the LBGTQ community. So stop hating and recognize the great contributions folks like me make to this community everyday.

Thank you @6:14 for some common sense. It's nice to see that not everyone who reads this blog is hateful. Really appreciate the information and the great comment.

Look out! The wigs and pantyhose are gonna fly when all these gay cats get their tails in a knot with each other!

He’s worse than useless. He’s dangerous. More focused on posting selfie’s on FB and writing long, drawn out narratives on bad publicity than on actually doing anything while in office.