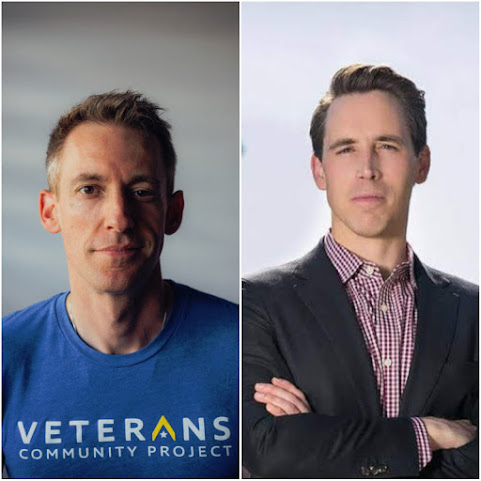 He recently chatted with former SecState Hillary Clinton on her podcast, proving that his Democratic Party credentials are still strong in the Beltway.

Just a bit before that . . . He shared a subtle snub against outcry from Missouri's junior Senator.

The retort from Jason Kander . . .

"A Senator said today that the President-elect’s cabinet nominees are “warmongers.” "It sad that insults like this are now commonplace, but it’s worse that we’ve come to take war so lightly that it’s normal politics to accuse a whole group of people of wanting more of it."

With respect to Mr. Kander and a sad realization about both sides of the same coin currently running the American plutocracy . . .

The odds of a war under the Biden administration are, in fact, higher given that the former Prez Bush Administration taught us that starting a forever war is the best way to demand loyalty from skeptical Americans who always rally around the troops.

Hoping that TKC is wrong about this one but, as Mr. Kander's military service reminds us, there are STILL THOUSANDS OF US. TROOPS STUCK IN AFGHANISTAN for reasons that NOBODY really understands and while the engagement is forecast to end in May of 2021 courtesy of Prez Trump . . . Forgive us if we have our doubts.

One of the major reasons that the DC establishment rejected Donald Trump so completely was his calls to end foreign wars and bring our troops home. Neoconservatives and Neoliberals would have none of that and fought that goal every way they could even including insubordination and deception. They even tried to impeach him because of his “isolationist” preferences. Hawley is right. The entire beltway establishment is made up of warmongers as is our ruling class that is rubbing its hands with glee over the prospects of being back in power shortly. I hope you enjoyed the peace that Trump gave you America because it is going away soon.

^^Nah, it was his crony political appointments, putting family members in positions they had no business in and pretending he was doing us a favor by not taking a salary while steering shitloads of business towards his properties. I think they got tired of that shit. And that fact that he's just not smart and was a shitty POTUS who only served conservatives one purpose, a tool to rubber stamp unqualified conservative appointments to courts.


the reason we're in Afghanistan, and were in Iraq, is to protect israel.

With Sec/State Belkin, a jewish advocate for israel, look for yet more American lives , and trillions of $$, to be put at risk fighting Iran.

I'm confused Joshy, are Democrats "Corporatists" or do they want Socialism? Or, are you just pandering?

How the fuck do people vote for this clown? Is it just his down home Ivy League education or the fact that he and his family have no interest in residing in Missouri?

11:25 how confused would you be to discover that the Wall Street corporatists of their day financed the Bolshevik revolution in Russia. Big capital and communism has always gone hand in hand. You would know that if you had ever studied history.

No one is going to rally around Joe "the rapist" Biden.

11:30: Could you provide some credible sources to substantiate your claim?

Only a total fucking retard breaks his foot playing with a dog.

He was probably groping the dog.

Some of them were less attractive or chubby but I wouldn't call them dogs.

11:12 trump fooled me too. thought he was for peace and prosperity. I knew hillary was for war and debt. so that's why I voted for him. this time, nah.

Kander I like, but he needs to join Hawley's budding anti-interventionism not challenge it!

how can Kander deny that biden is picking Hillary's war mongering cabinet? the nominee for sec'y of state was for iraq and libya and syria and yemen etc etc. when has he ever not been in favor of a war, if you object to the label "warmonger" ?

False. You don't have the brains for this discussion.

What? It's not believe all women anymore?

Tell the truth. It never was.

Some things don’t change. Big money seeks power and control and Communism is the most efficient way to achieve that.

You know that old perv was humpin' that dog.
And I don't mean Jill.

So now Corporations are apparently socialist because, hey Wall Street back in the early 1900's. Got it.

Whatever man. Josh is snowing you and you're apparently buying it. Being played like a fiddle.

Antony Sutton was a no more than a conspiracy theorist, the Alex Jones of his time. Nobody takes him seriously other than those who desperately want the nonsense he says to be true. Wall Street did not finance the Bolshevik Revolution. Corporate enterprises do not want Communism because a Communist government would nationalize their businesses and ship those businessmen they don't kill outright to forced labor camps.

11:07am....are the Kander rumors true? Just asking. Was he blackmailed?

Sure, if Alex Jones were a professor at UCLA and a research fellow at the Hoover Institute at Stanford. The bulk of his critics are Marxist apologists arguing that the Soviet Economy was not so dependent upon American investment and technology and that planned economies actually work. Next you will be calling Next you will be calling Bill Clinton’s favorite professor, Carroll Quigley, a conspiracy theorist for writing Tragedy and Hope.

^^^Keep buying Josh's bullshit. You're an easy mark if you believe that guy has fucking anything at all in common with you and isn't playing off your populist emotions. But then again, you're a Trumptard (yes, we know, you support Joshy and Joshy and Trumptard go hand in hand).

Jason Kander is so far out of the loop he makes Phill Kline look relevant.

How does Kander keep getting mentioned as some kind of rising star? He has been elected to a grand total of zero offices, but he's somehow going to start with the senate? How desperate are the Dems?

Not as desperate as the Republicants -they're all hoping for one of trump's "blanket pardons", which will be okay as long as it details exactly what criminal acts they are being pardoned of.

And @5:58, at least if Kander runs for the Senate or even for a State Office, he will meet the requirement that he is a Missouri resident, which Hawley never did.

Huzzah, two effeminate males fixing to slap fight. I cringe every time I hear someone pimping Hawley as the new face of the Republican party. That is NOT what we need. Kander already represents the vast majority of males in the prog party.

Kander is the weak ultimate loser!

Would love to be the filling in a Kander/Hawley sandwich!