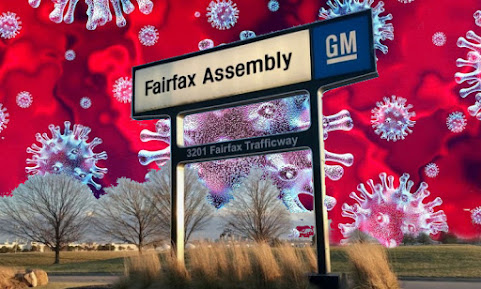 Local socialists share scary deets and allegations against a corporate giant and use off-record social media documentation to back up their claims.

"At Fairfax, UAW Local 31 officials recently were forced to acknowledge that there were a number of cases inside the plant, in the face of widespread anger which has been building up among workers over the lack of information on infections. The local’s “Shop Update” newsletter on November 10 stated that there were 10 new cases in the plant across five departments, affecting both the first and second shifts. Without explaining the timeframe for the emergence of the cases, the report stated that “several” workers had been sent out for testing.

"Seeking to justify withholding further details which would help workers determine whether they had been exposed, the UAW made perfunctory and fraudulent references to “privacy laws,” HIPAA restrictions and COVID-19 guidelines.

"The Fairfax worker said that the limited information released by GM and the UAW concealed the true scope of the virus’s spread throughout the plant. “We know that the shop chairman’s reports are inaccurate, they say such and such person in one area or another,” said Sam. (Sam’s real name is not being used to protect him from retaliation.) “We know of other cases throughout the plant. Word spreads mouth to mouth, and people post it on Facebook as soon as they go out.

“GM at the local level, they’re hiding the actual numbers of COVID. They don’t report tests done outside the plant, only those through the plant’s medical department. GM’s one of the biggest liars out there. I’m sure there’s a lot of cases out there they don’t want us to know about. As it gets colder and colder, it’s going to get worse.”

Socialist site? Not the Star? Okay then!

Correct. Lot of manufacturing outbreaks in KC but City Hall won't do anything about them.

It’s true. There is an outbreak there. I know someone infected. Thanks, MAGATS.

I have a secret santa that sends little pieces of dog poop.

Who cares?
COVID spreads everywhere. That's what viruses do.

12:59 I seriously doubt you know anyone at GM. You just can't pass up a chance to spout MAGATS. Sad..

In the meantime if you check out some actual news, you will note the libtards, from BLM to AOC to lthe Bernie Bros, are already wagin vicious internecine warfare against each other. Joe and his hoe already fucking up. ha, ha

You need to get infected in your butthole so it works up to your brain and it turns you into a drooling idiot.

City of Kansas City employees are going to lose their pension plans due to all of these Covid shutdowns.

^^ Blame Quentin Lucas and Rex Archer for having to work until Age 80.

It's in Kansas City, Kansas, you incredible amalgamation of dumbfucks. Therefore Mayor Lucas and Dr. Archer would have nothing to do with it.

Christ on a stick you people are stupid.

1:05 - right? Who cares? Oh, hey co-worker Bob, who's considered compromised when it comes to COVID, looks like you'll have to either A) quit your job or B)just roll the dice, because, hey viruses spread and people sure as shit can't bothered to give a rat's fuck about you fellow American. You can bet your sweet ass we can't be bothered to wear a mask in order to minimize your risk. Good luck with whatever you choose.

Maybe you, 1:05, should just go suck a pistol so you can take that shitty attitude with you when you die? mkay, thx.

the UAW would hide covid cases because if plant shuts down, workers don't get paychecks, and uaw does not receive dues. the union didn't want its workers getting unemployment or CARES Act money because from those monies UAW collects no dues.

"...said Sam. (Sam’s real name is not being used to protect him from retaliation.)"

Retaliation from his UAW brothers? Surely you jest??

Not when you consider that the UAW leaders are socialists.


well, when you're turning out shit products..there's bound to be germs and infections.