This afternoon the so-called paper of record is really attempting to convince the public that people still read their reporting.

‘Unacceptable’: City Hall officials respond to The Star’s report on racism in the KCFD

A glimpse at this week's distraction . . .

City Council members and community leaders said they were disappointed, shocked and disgusted by the treatment of Black and women firefighters described in a three-part series The Star published online Sunday. The series details systemic racism, sexism and harassment that the city has tolerated for decades.

Already, Mayor Quinton Lucas has asked fire officials to testify before the City Council on Thursday. The new city manager, on his first day, detailed steps his office will take over the coming weeks to address The Star’s findings. And a community leader called on the city to have public hearings about the KCFD.

Mayor Quinton Lucas said he was “gravely concerned” by the findings. Lucas, who was on the City Council for four years before becoming mayor in 2019, also apologized on behalf of the city.

“I haven’t been mayor that long, but on behalf of my predecessors, the city and myself, I think there are a lot of things that need to be fixed that weren’t,” Lucas said. “We will be dedicated to making sure they are addressed.” 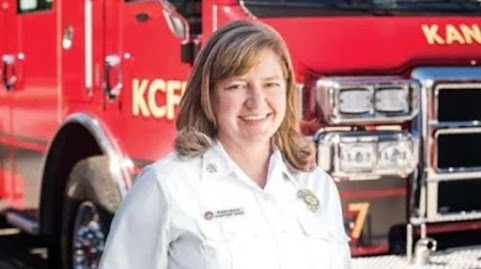 "The issues we face inside KCFD are a microcosm of what faces our community & society at-large. As a 28-year veteran female firefighter in KCFD, I fully expect all of KCFD to join me in ensuring equity and inclusiveness for all. I am taking steps to lead KCFD forward."

THE FAUX TRIAL IS A FARCE THAT HOPES DISTRICT THE PUBLIC AND MEDIA AWAY FROM GROWING FRUSTRATION WITH MAYOR LUCAS AND CITY HALL!!!

There's little to any widespread outrage at KCFD, all of the complaints are OLD and most of them emanate from lawsuits that have already been settled.

Small biz continues to push back against city hall.

Council will approve HUNDREDS OF MILLIONS for a couple of controversial projects this week.

And we're soon to get another round of furloughs.

This fake hearing is a scheme devised by the newspaper and the current administration who are preying upon the gullible while big money is being moved around amid the threat of KCMO bankruptcy.

Notice, when all is said and done, the policy impact will be minimal and few if any firefighters will get little more than a a wrist slap.

Don't be so cynical.

Mayor Q is totally going to reform the FD. They'll have to pay for that big tax increase!

Sorry, you're already paying for it.

There wantt any racism period, the commie red star made all this shit up because they’re worthless and no longer relevant

Oh if you only could have gotten your grubby hands on this story yourself, Tony. But don't worry! You'll get all the racist comments you want.

Democrats not playing well together.

Shouldn't there perhaps be some independent investigations instead of just anecdotal "evidence" before all the "outrage" and grandiose announcements?
It's a bit like the latest "police outrage" in another city today, where a black man was shot by police, but his family said he just had a couple sandwiches in his hand.
On the ground was found a gun, but no sandwiches.
Let's march!


no shit..had a friend who,back in the day..tried to get hired as a KC Firefighter ..sharp guy..but..no luck ..said it turned out you needed to be a relative, or , a best bud of a current firefighter, to get hired.

Just the Star trying to stir up crap to get the people attention away from all the other bullshit going on that they really need to know about.

The most racist's thing in town is the KC Star!


people lined up to get in on the Firefighter Union scam..

meanwhile..KC PD has to actively recruit to find applicants ..

yet both pay pretty much the same

I love watching them eat each other.

I guess this is what suffices for entertainment in Kansas City.

FACT: KCMO doesn't actually have their own Fire Department.

What they have is a corrupt independent contractor agreement with the fire union. The union calls their own shots, enforces their own rules, and scams the City annually with inflated budgets, overtime for everyone, and no accountability.

Just look at how many of their full-time employees also have side businesses.

Fire union controls the Council/Mayor with their political support and contributions.

I think that the KCFD (and Local 42) both welcome this inquiry. It will show that these repeated claims of racism within its stations are just another set of Black Lies told by Black Guys. Someone is trying to get paid because KCMO always settles these cases rather than fight.
Every complaint mentioned in these articles has a completely justifiable explanation as to what truly happened, but BLM has taught us to look away from the truth every time someone cries "racism".
Hold the hearing, i can't wait to hear the truth. Then, after these complaints are summed up to " He was lazy and not a good fireman" all the BLM SJWs can hold a few more peaceful protests and spread the covid some more.
Bring on the hearing. The hardworking men and women of the KCFD welcome the scrutiny and have nothing to hide.
Meanwhile, why is the KC Star rerunning old stories? The STAR has hated the KCFD ever since one of the editors wives got double teamed by two guys wearing FIRE t shirts. Hopefully, within the next 6 months, THAT rag will be out of businesses and that eyesore of a building will be torn down.
Long live the KCFD, and long live the good men and women who work for them.
Black Lies Matter

I would think that having a firefighter who tried to kill a cop, another who sold guns illegally and one who beat up his girlfriend in a bar would be of more concern.

07:33 you are correct. Stories of the KCFDS occasional "one bad apple" seem to be what the Star REALLY loves. But this racism angle is getting pretty tired.

^^ You Nailed it. If one black person might have been treated bad, it is Racism. If 10,000 blacks kill each year, It is slavery or white nationalism. In 2020, there are excuses for everything but the facts.

Can you imagine a bunch of fat KC gals hired by affirmative action hoppin off the truck and trying to put out a fire? The city would burn faster than Rome.

^^^I'll guess that there is a lot of resentment against women firefighters because so many of them are physically incapable of doing the job. The men have to work harder to take up the slack.

If you think change at KCFD will occur under Mayor Q you only need to look at the front page of the KC Star the day after he was elected. Front and center on the paper was a large photo of the Mayor with Fire union president Tim Dupin perched just behind his right ear, almost foreshadowing the Union whispering directions to the mayor. Almost 80% of the lawsuits mentioned in the story occurred in the past 36 months and were directly a result of the City cutting a deal with the union and making the union secretary and president chief and assistant chief in 2018. Neither were remotley qualified for their positions and were promoted over the current Chief Donna Lake and Deputy Chief Garrett who then sued as was mentioned in the article. The union has such a choke hold over the mayor and city council they get away with pretty much anything they want, from the over staffing fire truck to sending so many fire trucks to a fire it is ridiculous. Why do they do that you ask, so they can manipulate data to preserve or increase their numbers. Fires are only 12-15% of the calls they run, yet everyday the citizens of Kansas City are short 6-10 ambulances and this is seen as acceptable to both the City and the union. Why you ask when 85% of the calls ran are for medical problems, because the good ol'boys of the fire union don't want to be moved from thier shiny red trucks to be made to work on an ambulance. Don't take my word for it, in 2014 the Fire Department bought and paid for a study that shown all of the overtime and ambulance staffing issues could be solved by re-districting fire trucks, cutting the response package to match 12 simialr sized metropolitian cities and staffing the fire trucks and ambulances with people who do both medical and fire fighting which reduces the duplication of staffing. When is someone going to start asking the though questions around here and demand City Hall stand up to the union. Maybe we need to flip the cops and the fire, local control for the cops and state control for the fire.

Don't forget the guy that shot up heroin while driving around with his kids and passed out at a stop light. I believe he is now a captain. Nothing like being a full blown addict and getting promoted.