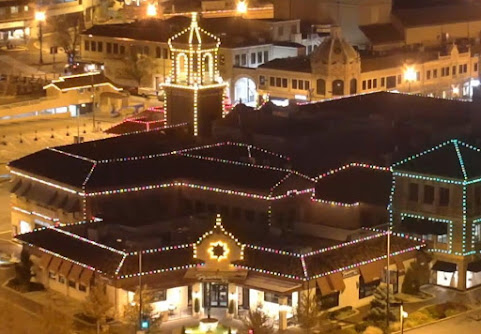 The COVID-19 pandemic along with social justice protests and ensuing riots have devastated the most iconic entertainment district in the American Midwest and the crown jewel of all tourist attractions in Kansas City for nearly a century.

Sadly, it seems that protests against police brutality following the killing of George Floyd garnered the largest attendance on the Country Club Plaza in 2020 and earned support from Mayor Quinton Lucas.

Even worse . . . Those "mostly peaceful" protests did, in fact, spark rioting, looting and resulted in a slew of violent conflict, a torched police car, broken windows and chaos during the Summer. And, just as many predicted, the terrifying memory of civil unrest raging out of control still seems to linger as visitors have forsaken this destination despite generations of loyal customers making this locale part of their family traditions.

Remember, as many suburban holiday lighting displays have demonstrated, it's possible to maintain social distance and view the Plaza lights from a vehicle. Still, this year patrons seem to have opted out.

Moreover, restrictions on occupancy and a strict 10PM curfew have all but killed any restaurant business in the Plaza according to a few servers who have sent in angry notes to TKC lamenting so many lost tips that are historically generous during the holiday season.

As for the shops, denizens of the Internets ague that Amazon killed the retail biz long ago but last year the luxury market and fawning upscale customer service seemed to be one segment that might survive a cold tech consumer onslaught. Now in 2020, the elite customer base has simply skipped the Plaza altogether and fancy cars or trendy people are nowhere in sight.

A friend of the blog sent this note our way just a few moments ago . . .

"It's almost scary. There's nobody down here. I know that a lot of the stores have closed but I've never seen it like this . . . A few servers at the restaurants are just looking around and waiting for people to show up. On my walk I bought a coffee and there was absolutely no line. This can't lost for very long. I would think that they're probably losing money keeping the lights on for the few dozen people who are actually here doing some shopping. Honestly, it makes me want to cry."

And so, the "dark days" of Winter seem to be on their way to Kansas City and not even the traditional lights of the holiday season provide any hope of illumination against the shadow of death that has moved across the entire nation and our beloved cowtown.

You now, there's plenty of blame to go around. I see people go back and forth blaming Q and then Trump about this.

What I never see is people attempting to come up with any kind of solution.

But I can't do anything about anyone else. My solution is never voting for Quinton Lucas for anything ever again.

Keep it safe and people will come back.

The minute that the Mayor marched with a violent protest, it was over for the Plaza.

Not even Sly did that. He called for a non violent protest after a similar shooting. He got in the crowd and supported the protest, sure. I don't agree with him about the issue but he was there to show that crowd that they could protest without being violent.

Did Quinton do that?

He got in there with them yelling and facing off with the police.

It was a disgusting sight to see and something that I will never forget. That was when Quinton showed us that he doesn't really care about Kansas City.

Safety is the key. But who is doing to do that if people are encouraged to hate the police?

Good on you Granger. Glad some people have a memory here.

Have they shutdown Christmas yet?

Thanks BLM. Now your lemmings will have no place to loot for Kwanzaa. They'll need to find other places to shop(lift). Don't worry, they'll still vote democRAT.

7:49 Wish your prediction was true, but there will be nothing left to come back TO.

If u CHUDS would mark up this would have been over months ago. Thanks a lot Trumpkins.

FUCK YOU AND YOUR MASK KR
SHOVE IT UP YOUR ASS

If the blacks had worn masks while they were destroying the Plaza maybe it wouldn't be dead?

Mayor mcdumbo knows he cant beat the chiefs with a shutdown, what mcdumbo is doing is breaking the law and the sheeple are taking it up the ass with a smile on their face..

Besides, mcdumbo needs his free suite, food and drink, lots of free drinks at the chiefs games while taking selfies.

Seemed plenty crowded to me; this post seems totally made up.

whatever lady, i've hated your crap town for so long it does make me cry.

when i did not live in KC i used to have nightmares about it and the people, now i hate your crap fckn town more now than i have ever in my life.

BLM and the Scholars murdered the Plaza. Just as they murder each other, night after evil night.

Welcome to the dark Communist World of no fun and sadness.

Thanksgiving and Christmas is Bad.

Rioting and looting is Great.

Weird that no hatred against murderous police was needed to kill the Blue Moose in PV, just Trump's rampant pandemic & failed economy, but on the Plaza it's only all about safety of white people.

And yet Q is not even the mayor of PV but somehow the Blue Moose died too.

How come it's "China Joe Biden" & not China Ivanka Trump?

I absolutely refuse to spend my money anywhere that tries to make me wear a face diaper. You want my bucks, drop the communist shill act. Fortunately there are plenty of hole in the wall foreigner owned restaurants that understand how modern life works. You're gonna spend money there, they aren't going to make you wear a stupid Shit mask

Well I guess you'll save a shit ton of money then. But where will you get your Milwaukee's Best and Pall Malls?

Isn't it funny before the election it was all "Hunter Biden's laptop" and now it's "everybody gets a pardon?" Amazing!

I know that people say this all the time, but, it is time to move away from Democrat cities. I am leaving next year. In the rest of Missouri, NO MASKS and no problem. No shutdowns and life is normal. Here and everywhere in America where petty tyrants = Democrats hold sway - economic disaster.

your whole town is petty tyrants.

Plaza is nice without the crowds.

Shame nobody ever told @10:15 that he's allowed to take his mask off while he's eating - but he sure is fun to watch in a restaurant!

Lucas will lose reelection, he will have a horrible reputation for mismanagement, lack of leadership, poor conduct, but then....

(3) He'll get a literary agent and write a book.

Mayor Q destroyed this city for encouraging riots and enforcing shut downs. Do not forget this.

Sad, pathetic and completely unwarranted. I said the Plaza was dead this summer. That Quentin Lewis has WRECKED Christmas on the Plaza is a testament to his abject failure. Too hell with this ahole and the idiots who voted for him.