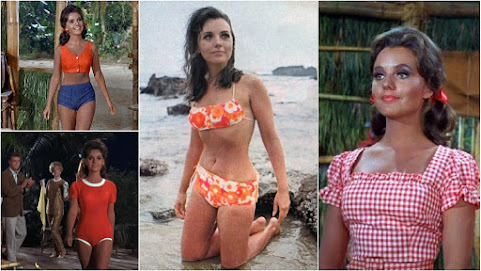 Last #TBT of 2020 deserves to start with just a bit of nostalgia and so we consider the legend of Mary Ann Summers as portrayed by Dawn Wells - Who recently died at 82 from COVID-19 complications.

Wells attended Stephens College in Columbia, Missouri and later transferred to the University of Washington in Seattle but Mary Ann was simply a young woman from a farm near Winfield, Kansas. For more than a few men who grew up on reruns, she represented a kind of alluring, wholesome Midwestern innocence that added just a bit of sentimentality to an iconic and campy television classic.

A major portion of this blog is dedicated to the role of hotties in the American discourse and Mary Ann was one of the pioneers of that conversation.

And so, the legacy of Mary Ann and her short shorts inspires this morning's peek at pop culture, community news and top headlines.

Because of the investigation into Monday's Waldo Heights apartment fire, 30 families have not been able to come back to their homes. They haven't been able to get anything like keepsakes or to see if anything survived."That's when I seen the black smoke coming from our wall. I was like 'Oh snap.

KANSAS CITY, Mo. - Enrique Chi and his band, Making Movies, should have spent 2020 touring and performing in front of live audiences. Instead, the novel coronavirus changed the band's plans. "It's difficult not to connect with people in a physical space," Chi said. "Music is healing to me.

Dawn Wells, the actress who went on a fictional "three-hour tour" in 1964 and found lifelong fame as the bubbly girl-next-door Mary Ann Summers on the TV sitcom "Gilligan's Island," died Wednesday of complications from COVID-19 - one of more than 341,000 Americans to die in the pandemic.

WASHINGTON (AP) - Senate Majority Leader Mitch McConnell all but shut the door on President Donald Trump's push for $2,000 COVID-19 relief checks, declaring Congress has provided enough pandemic aid as he blocked another attempt by Democrats to force a vote.

Donald Trump Jr. decided to tweet about the Hilaria Baldwin Spanish scandal Alec Baldwin's wife, 36, has denied pretending for years she was Spanish Her real name is Hillary Hayward-Thomas and was born in Boston, not Mallorca President's son said Alec Baldwin should play himself on Saturday Night Live when it covers the scandal, saying it would be 'the first funny thing in years' In a Wednesday interview Baldwin claimed that she is not guilty of any wrongdoing after being accused of trying to pass herself off as a Spaniard President Trump's son Donald Trump Jr.

China clamping down on research into origins of COVID-19 pandemic

Nearly a year to the day when the first COVID-19 cases were reported in China, Beijing is clamping down on research into the pandemic's origins, while actively promoting fringe theories that it could have originated outside the country. The government is distributing grant money to scientists -- affiliated with the military -- who are researching the virus' origins in southern China.

How Many Times Have You Checked Your Bank Account???

Stimulus payments to Americans are on the way, government says

Americans can expect to start seeing $600 in their bank accounts immediately as the federal government's second round of stimulus payments is being sent out, the Treasury Department and the Internal Revenue Service said.

Lance Bass: 'We Should Listen' to Britney Spears Amid Conservatorship

Lance Bass is showing his support for Britney Spears amid her ongoing conservatorship case. In an interview with Australia's Today Extra on Tuesday, 41-year-old Bass commented on 39-year-old Spears' legal battle with her dad, Jamie Spears. The pop star's conservatorship was recently extended until September 2021.

How a doctor and activist brought more than 5,000 COVID-19 tests to KC's most vulnerable

A primary care physician with an innovative take on healthcare and a passionate activist with an extensive background in video production might seem like an unlikely duo, said Dr. Allison Edwards. But she and serial creative Jay Austin united their strengths during the pandemic to help underserved communities in Kansas City gain access to critical testing resources, the duo said.

A Winter Storm Watch will begin at 9:00 PM Thursday evening and run until 6:00 PM Friday for counties in our area including all of the Kansas City Metro. A mixture of freezing rain and sleet possibly mixed with snow at times will begin close to midnight Thursday night continuing through the night.

Stevie B - Because I Love You (The Postman Song) is a truly horrible tune that earned #1 ranking on the Billboard charts throughout December 1990 and it serves as the #TBT song of the day for this OPEN THREAD. Keep going for more local links . . .

Donations pour in for victims of Kansas City apartments fire

KANSAS CITY, Mo. - Help is pouring in for the dozens of people forced out of their apartment by a fire Monday night. The two alarm fire gutted the Waldo Heights Apartments off 80th Street and Troost Avenue. The red cross is already helping 32 tenants with temporary housing and St.

Kansas City-area residents may start thinking differently about a staycation next year. Travel + Leisure released its "50 Best Places to Travel in 2021" list, and Kansas City ranked No. 20. The annual list came with a twist this year - only U.S.

Technology has been the lifeline for many of us to stay connected in this socially distanced world. Tech stores have been noticing some new trends in 2020.This year has been crazy for everyone.


Save The Old School

LENEXA KS (KCTV) -- Some of the first coronavirus vaccines are arriving at assisted living facilities in the Kansas City area. At Homestead of Lenexa Jean Suman, 94, was one of nearly 30 residents who volunteered to receive the first dose Wednesday morning.

KANSAS CITY, Mo. - Nika Cotton pours comforting creations at her tea room, Soulcentricitea, seven days a week. She helps her customers decide on a concoction that suits their mood for the day. "I have lemon balm, which is really calming," Cotton said to her guests.

To support needed upgrades at area sports complexes, the city of Shawnee is increasing its transient hotel guest tax rate. The new tax rate will be 8%, up from 6%. It takes effect April 1, the Shawnee Mission Post reports.

KANSAS CITY, Mo. - At 10:30 a.m. every Thursday, Greg Davis hops in his car and drives up and down Troost Avenue from 55th Street to 75th Street, stopping at specific homes to deliver hot and frozen meals. "For me, it was a way to give back," said Davis, who has been doing this for eight years.

OVERLAND PARK, KS (KCTV) -- Overland Park firefighters had to use oxygen on a dog they saved from a house fire early Tuesday morning. But the dog is now safe and in a vet's care. Firefighters responded shortly before 9 a.m. to a house fire on West 157th Street near Rosewood Drive.

If it seems like a slow off-season, that's because it is

A winter freeze has fallen over the Midwest, but in baseball, that freeze has been in place since the fall. Kansas City has been an oasis in activity, with Dayton Moore signing four free agents so far - first baseman Carlos Santana, outfielder Michael Taylor, and pitchers Mike Minor and Greg Holland.

KC Public Library announces "Whenever Book Club" for those of us who want a book club, but are bad at doing a book club

It is possible, and we aren't suggesting that this is the case, but it is possible that you or someone you love might be bad at book clubs. We know: scandalous. J/K. We're terrible at it. We love reading books. We plow through them.

Michael Bushnell Publisher Given the year we've had, this postcard seems fitting to close out 2020. "If you don't soon come to Kansas City, I'll come after you with an axe." This novelty postcard, complete with the felt pennant emblazoned with Kansas City, was mailed on August 2nd, 1912 to Mrs.

it's not either or. Ginger was also VERY worthwhile.

I saw recent pictures of Mary Ann at 82 and Ginger at 86. May Ann was the cutest 82 year old woman I'd ever seen. Sorry to say that the years hadn't been as kind to Ginger. She's the last survivor standing from the show.

Sweet Mary Ann, she will be missed.

And now Junior Pumpkin has a cause--attacking actors' spouses.

Enough testing. Get with the vaccinations in all nursing homes and other long-term care facilities. This isn't rocket science.

Don Jr. is pretending to be human, far worse.

....and you're pretending to be clever. Failed.

^^and yet he triggered you! Success!

U.S.—Many Americans, in anticipation of a $600 government-issued stimulus check, have treated themselves to a brand new gun. Now that President Trump is calling instead for $2000 checks, gun stores are struggling to keep up with customers returning their $600 guns and purchasing $2000 guns.

“I sure am glad I kept the receipt!” exclaimed local gun enthusiast Anthony Harb upgrading his firearm. “It’s time to treat myself to something truly special!”

The bill was originally intended to provide relief for those out of work and affected by the ongoing pandemic, but after the U.S. paid hundreds of millions to other countries, $2000 per American was all that was left. Since $2000 is not enough to cover 8 months of rent or other necessities, many Americans have decided that one thing they can afford is protection from the bloated and power-hungry Federal Government.

Several gun stores across the country have already issued statements that they are sold out of all guns at the $2000 price point. Buds Gun Shop & Range in Tennessee has even called for no returns on $600 guns, suggesting customers buy multiple guns instead.

“We may not know what the future holds, but at least now I won’t have to face it without my Daniel Defense M4V11,” added Mr. Harb at checkout.

At publishing time, despite no arrival of stimulus checks, President Donald J. Trump had already been named gun salesman of the year.

WASHINGTON, D.C.—Some much-needed money is coming to people when they need it most, as everyone in Congress is now getting a $100,000 bonus for coming up with such a great coronavirus relief bill.

“This comes at a crucial time, as people like me are really struggling right now,” said Senate Majority Leader Mitch McConnell. “Struggling to afford that new Bentley.”

Congress really felt they deserved this bonus, as they did such a great job putting together a relief bill, only taking a few months to agree on one. “We really worked hard on this,” said Senator Chuck Schumer. “I mean, a day or two, we were here until seven... seven at night! And it’s nice to get recognized for our hard work.”

Not only will members of Congress be getting money, but the relief bill also gives $600 to regular Americans. “As far as I understand poor people,” said Speaker of the House Nancy Pelosi, “that’s a lot of money for them. That’s enough to fill up a pick-up truck bed with Doritos to stuff their fat faces. They’re going to be very happy. And I think we in Congress deserve money -- real money -- for bringing them that happiness.”

Look Trump got his wish to take us back to when women were taking care of children at home, he just had to kill 350,000 Americans to do it.

I always wanted to fuck the Skipper.

Trump invented the virus you guys! China? Who the fuck is China? Let's keep this narrative going the right direction! Next time let's say half a million!

Can Alec Baldwin pretend to be anything but a bitter old hostile drunk? After all he is an actor, or used to be.

They're not allowed to attack us back you guys!