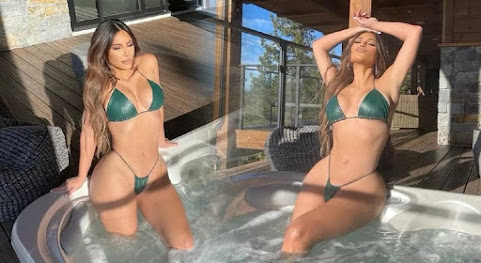 For the mid-morning we take a peek hottie Kim K. sharing her bathing beauty routine as the old school influencer stays true to her modeling roots. And all of THAT inspires us to take a peek at pop culture, community news and top headlines right now . . .

KANSAS CITY, Mo. - The city's urban renewal agency found Wednesday the company that manages Gabriel Tower is in default of its contract. The Land Clearance for Redevelopment Authority (LCRA) Board of Commissioners made the decision after hearing testimony from a building inspector, tenants and representatives of The Millennia Companies.

Hide Transcript Show Transcript SHOT AT ELMWOOD AVENUE, HAS LIFE-THREATENING IMAGES -- INJURIES, THESE ARE LIVE IMAGES. NO LEADS ON THE SUSPECT, BUT IF YOU DO KNOW WHAT HAPPENED OR -- PLEASE CALL THE TIPS HOTLINE WHERE YOU WILL ALWAYS BE Kansas City police are investigating after a person was shot Wednesday evening near 26th Street and Elmwood Avenue.The shooting was reported at 9:04 p.m.Police said a male suffered life-threatening injuries.

Among some, opportunities to settle in for a warm winter's nap will be highlights of the holiday season. Around the same time, a visible Country Club Plaza-area fixture will come to a permanent rest, freeing up a promising property along the future 3.5-mile southern streetcar route.

Joe Exotic - the ex-zookeeper convicted of trying to hire a hit man to kill rival Carole Baskin - is hoping Kim Kardashian can get him out of jail, a report said Tuesday. Exotic, whose story was made famous in the Netflix show "Tiger King," penned a letter to Kardashian, asking if she could help score him a pardon from President Trump, ET reported.

President-elect Joe Biden has tapped Obama's former national security adviser Susan Rice to run the White House Domestic Policy Council, according to people familiar with the decision. Rice, who also served as the U.S. ambassador to the United Nations, was vetted to serve as Biden's vice president and was a contender to be secretary of State, a position that went to Antony Blinken.


No Check For X-Mas

Congress has hit a wall again in efforts to send help to Americans during a coronavirus outbreak that has killed thousands of people a week and left millions waiting in food lines. After days of trying to reach a relief deal, lawmakers as of Wednesday afternoon had not resolved a range of issues preventing an agreement.

Biden's Pick for the Pentagon Instantly Becomes a 'Hot Mess'

It was always going to be difficult to convince Congress to again allow a general barely out of uniform to run the Pentagon. But according to four Democratic Hill sources, President-elect Joe Biden's abrupt announcement of Lloyd Austin as defense secretary-designate was the sort of surprise that made Austin's odds longer.

Can We Win Back the Culture or Are We Heading for Secession?

Rush Limbaugh, America's Anchorman and Doctor of Democracy, is known as the pioneer of AM radio. Limbaugh revolutionized the media and political landscape with his unprecedented combination o f serious discussion of political, cultural and social issues along with satirical and biting humor.

Ben & Jerry's is honoring social activist and former NFL quarterback Colin Kaepernick with a new flavor. The group announced the new flavor "Change the Whirled" on Thursday morning. It is a vegan offering and will feature a caramel non-dairy sunflower butter base with fudge chips, graham cracker swirls and chocolate cookie swirls.

Northern Lights may be visible in Kansas City Thursday night

#1 in 2000 - Destiny's Child - Independent Women is the #TBT song of the day and this is the OPEN THREAD for right now. Keep going for more local links . . .

Driver killed in Thursday morning crash into tree in KCMO

KANSAS CITY, Mo. - One person was killed in a single-vehicle crash early Thursday morning in Kansas City, Missouri. According to police, the crash happened just before 1 a.m. at East 115th Terrace and Oak Street Investigators believe a black Nissan Altima was headed south on Oak Street at a high speed when the vehicle went off the roadway.

OVERLAND PARK, Mo. - Another metro resident is now the victim of porch pirates. She says it's what was taken that hurts so much. It happened Friday near 87th and Metcalf. Doorbell camera video shows a delivery van leave packages at the home.


The Dotte Shuts Down

WYANDOTTE COUNTY, KS (KCTV) -- The Neighborhood Resource Center will be closed for in-person service until Jan. 4. The temporary closure is due to staffing shortages caused by COVID-19. It will close to in-person customer service at its 4953 State Avenue location starting on Thursday.

KANSAS CITY, Mo. - Three trailers were reported stolen from three Shawnee businesses in a span of a few days. The first went missing Friday night and two more were taken around 1:50 a.m. on Monday. Now, the owners are hoping surveillance video of the thefts will help police catch whoever is responsible.

a Zai mentioned at my last press conference. I want to take a moment each week to highlight, uh, the efforts of local health professionals. And this week I want to recognize Dr Gianfranco Pitino, the Shawnee County health officer. I've known John Franco for three decades, both professionally and personally.

Reward raised to $7,000 for information on Missouri woman missing since Mother's Day

A mother of four went missing on Mother's Day and her family has increased the reward to $7,000 for any information that can lead to her whereabouts.

TOPEKA, Kan. (KSNW) - Governor Laura Kelly held a press conference from the Topeka Statehouse Wednesday to provide updates regarding COVID-19 in Kansas. In her briefing, the governor promoted the "Stop the Spread. It's Up to Us, Kansas" campaign - her administration's public health initiative to handle the coronavirus pandemic.


Another Look At Local Lights

Did you know the "longest animated light tunnel in the Midwest" is in Kansas City? If not, then it's time to schedule a visit this holiday season to Winter Magic.Winter Magic is a drive-thru Christmas lights event that stretches for about 1 mile along Oakwood Drive in Swope Park.

KANSAS CITY, Mo. - At least 12 million Americans will be losing emergency unemployment benefits at Christmas time if Congress doesn't pass a new COVID relief package. That's why the Full Employment Council of Kansas City is encouraging the community to enroll in its free job-training programs. Those programs are already helping two metro moms get on the road to a new career.

Reactions to the Carlos Santana signing

The Royals continued to be aggressive this off-season, signing former All-Star first baseman Carlos Santana to a two-year, $17.5 million deal. The move shows a new, fiscally aggressive side of the Royals that could help the rebuild. Let's take a look at some of the reactions to the signing.

The Kansas City Chiefs have their Walter Payton NFL Man of the Year nominee: tight end Travis Kelce. The team announced the nomination via its official Twitter account on Thursday morning.

KANSAS CITY, MO (KCTV) -- New Year's is usually a cause for big celebrations but things look to be subdued this year due to the pandemic. So where are the best places to celebrate this year? A new WalletHub study found that Kansas City ranked 39th overall for best cities for New Years.

It'd be funny to watch Texas and Florida flail when they find out they're supporting all the other shitbag states after secession.

You mean like the rest of the country is supporting shitbag Kansas City?

What about the North Star?

Nothing like Frank White fleecing you for $20 to look at Christmas lights that take 6 minutes to drive through.

Red States would have all of the natural gas and oil reserves.

Big Tech is moving to Texas.

Would love to see the Midwest and Southeast break away from Communist New York and California which are billions in debt, high crime and high taxes plus underfunded pension plans.

Would be worth it simply not to hear Governor Cuomo's lying horse face anymore.


Why do Democrats that are corrupt have funny names like Anthony Weiner, China Joe Biden and now this Representative Shitwell cavorting with a Chinese spy.


Warning!! Unemployed basement imbecile @12:39 is active. Be prepared for amazing stupidity. Remarks may include such terms as: CHUD, geezer, MAGAT, Trumptard and weird. Often starts with two or more silly ^^ marks. It is strongly recommended one should ignore what he/she/it posts as it may cause brain damage.

It is not treason to want a peaceful separation when the union can no longer be realistically maintained. Let the left have their states and go their own way and let the right have its peace so it can watch the failure from a distance and not be drug down with it. We want a divorce.

"Can We Win Back the Culture or Are We Heading for Secession?"

What's the del with Rush Limbaugh? Trump gave him his Medal of Honor or whatever. Wasn't he supposed to be dead by now?

Kamalface still has not step down from her HARD EARNED blow job senate seat.

1:54 it’ll be funny to watch them pay for stuff when their base is unemployed moochers on the gubmint tit!

"to protect the Constitution of the United States of America from ALL ENEMIES, whether Foreign OR DOMESTIC"!

Typical Right Wing extremism - we lost, so we're going to throw a tantrum and destroy things, except in this instance its a Country! Didn't work in 1861, won't work now.

HANG RUSH LIMBURGER BEFORE HE DIES!

Hot appetizer to be enjoyed with a cock-tail!!!