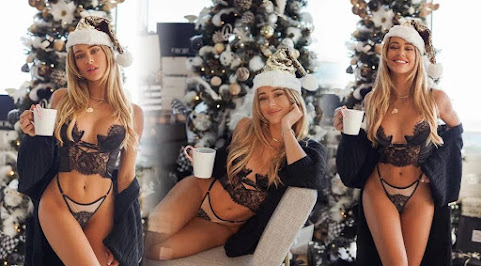 Forgive us if we're still in the Christmas spirit as hottie Cindy cleverly shills her fashion goods amid the consumer holiday afterglow. And we share community news, top headlines and pop culture.

KANSAS CITY, Mo. - More than 200 high-risk Kansas City Veterans received the Moderna vaccine at the VA Medical Center on Saturday. "When do I come?" 88-year-old Korean War Veteran Carl Sulzen responded when he got the call that he could be among the first veterans to get the vaccine at the facility.

At least 3 displaced by apartment building fire in KC

KANSAS CITY, MO (KCTV) - This afternoon, the Kansas City Fire Department was dealing with an apartment fire that left some residents displaced. The fire started just after noon at an apartment building in the area of on E. Armour Boulevard and Forest Avenue.

Los Angeles is home to the largest garment manufacturing hub in the U.S. with 46,200 garment workers employed across cut-and-sew garment activities. The industry is the second-largest manufacturing center - and creative economy - in all of Los Angeles county.

President Donald Trump went on a Boxing Day Twitter rant, where he attacked the FBI, Justice Department, Supreme Court, Senate Majority Leader Mitch McConnell, and other Senate Republicans for various claims related to voter fraud-claiming that it cost him the election to President-elect Joe Biden.


GOP Next Gen Against Prez

Rep. Adam Kinzinger on Saturday called out President Trump and House Republicans who back his "crazy conspiracies" and denials that he lost the election to President-elect Joe Biden. The Illinois Republican took special aim at Trump's accusations that the Justice Department (DOJ) and the FBI "should be ashamed" for somehow not joining him to call into question the 2020 presidential election results.

Amid a flurry of tweetscriticizing everything from the Supreme Court to the Department of Justice, President Donald Trump again aired his displeasure of the COVID relief package, pushing for a $1,400 increase over what Republican and Democratic leaders had negotiated and leaving the status of the bill uncertain as unemployment benefits for million are set to expire.

David Malloy had been out walking his dog when the Nashville bomb exploded He said he saw police cars in the street and a police officer approached him As the cop was telling Malloy to evacuate the area, the bomb detonated Explosion occurred on 2nd Avenue in Nashville's downtown at

In yet another tone-deaf display, the Kardashian family took to social media to show off the elaborate, extravagant and expensive gifts they got for each other. While hospitals in Southern California are overwhelmed by the massive COVID-19 surge, and many of their neighbors and fellow Californians are in dire financial straits, the Kardashians went on social media to brag about their presents.

by: Chris Six Posted: / Updated: SPRINGFIELD, Mo. (KOLR/KOZL/KRBK) - The Ozarks got 12 new aquatic residents for Christmas. According to a press release from Wonders of Wildlife, 12 endangered loggerhead sea turtles who were stranded on the beaches of Cape Cod were sent to Wonders of Wildlife due to sea turtle rehabilitation centers along the East Coast already at capacity following a record year for strandings.

Mostly sunny, breezy for your Sunday

ROLLING IN, AND WE GOT HERE JUST IN TIME FOR THAT GREAT SUNSET. NO PRECIPITATION OUT OF THOSE CLOUDS FOR US. WE WILL REMAIN DRY AND TEMPERATURES WILL GRADUALLY COOL FROM THE 40'S INTO THE UPPER 30'S. WE WILL NOT SEE A BIG DROP IN TEMPERATURE, WHICH IS SOME GREAT NEWS.

Awwww. Poor baby. Reminds me of the Coasters' "Charlie Brown:" "Why is everybody always pickin' on me."

I don't think trump is a man baby one bit. The man has never lost in his life until now. Most of go through this at age 10

The real losers are the American public that’s who. Cheating to make dementia China joe President is an even bigger slap in the face of all Americans.

Sounds like the FBI just showed Rep. Adam Kinzinger a file of compromising pictures of him so he'd hate on Trump.

Reminds me of Hillarious's screams of distress after her defeat.