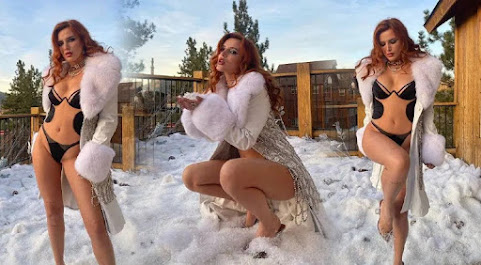 Winter is coming and right now hottie Bella and her online antics as she transitions into "adult" work for the Internets inspires this peek at pop culture, community news and top headlines.

KANSAS CITY, MO (KCTV) -- Police in Kansas City are investigating a shooting in the 1200 block of E. 41st Street. The shooting happened around 8:40 p.m. on Sunday evening, police said. An adult male was rushed to the hospital before police arrived to the scene.

Kickoff for Chiefs, Chargers on Jan. 3 at Arrowhead Stadium pushed back

IT WASN'T PRETTY BUT A WIN IS A WIN FOR YOUR KANSAS CITY CHIEFS THEY NOW SIT AT 14-1 AN HAVE LOCKED IN THE FIRST ROUND BYE. THE FIRST HALF WAS PRETTY UNEVENTFUL ON BOTH SIDES. TRAVIS KELCE SECURED THE TEAM'S ONLY SCORE WE HIT THE HALF AT SEVEN ALL.


Vaxx On The Way

COVID vaccine on its way to 900+ assisted living facilities in Kansas, Missouri as soon as today

KANSAS/MISSOURI (KCTV) -- Thousands of doses of the COVID-19 vaccine are on their way to nursing homes and assisted living facilities in Kansas and Missouri today. U.S. health officials have said they are focused on getting the vaccines from Pfizer and Moderna to people in nursing homes and similar facilities across the country.

"Too hot to get cold 😈," one person pointed out, and another added, "I'm surprised the snow isn't melting!🔥🔥🔥!" Scroll Down For More Eye-Popping Photos! Bella Throne made huge headlines this week after publically feuding with her ex-GF YouTube star, Tana Mongeau.


Diehard MAGA New York Post To Prez Trump: 'Give It Up'

President Trump has had few more stalwart backers in the media than the New York Post editorial board. The Rupert Murdoch-controlled tabloid was among the first to endorse Trumpfour years ago, and this year urged voters to give him a second term.

An independent Chinese journalist who reported from Wuhan at the height of the initial coronavirus outbreak has been jailed for four years by a Shanghai court, her lawyer said Monday.

TSA screened more than 1.1 million travelers the day after Christmas, despite CDC warnings to stay home

More than 1.1 million people traveled through airports around the United States on Saturday, nearing Wednesday's pandemic travel record - despite warnings from the Centers for Disease Control and Prevention to stay at home to quell coronavirus cases. The Transportation Security Administration said it screened 1,128,773 people the day after Christmas.

Lori Loughlin may have missed spending Christmas with her family but the good news ... she's only 3 days late 'cause she was just released from prison. The "Full House" star will enjoy the rest of whatever 2020 has to offer after she was sprung free Monday ...


Her Real Name Is Hillary

Hilaria Baldwin Has Been Posing as a Spanish Person for Years

Last week, a Twitter sleuth sketched out how Hilaria Baldwin, the influencer wife of actor ( and sometime SNL star) Alec Baldwin, has perpetrated "a decade long grift where she impersonates a Spanish person."

The struggle is real for Missouri when it comes to a constant shortage of K-12 public school teachers. The state Department of Elementary and Secondary Education (DESE) wants to ramp up its teacher workforce by seizing the opportunity in a relevant setting. Dr. Paul Katnik, assistant commissioner of the Office of Educator Quality, says he [...]


Kansas End Of An Era

Oldest VFW post in Kansas at risk of shutting down

WICHITA, Kan. (KWCH) - The oldest Veterans of Foreign Wars post in Kansas needs help from the community. VFW post 112 is at risk of shutting down its facility in Wichita. Like many nonprofits, the post, which has been open since January 1920, is struggling this year due to the pandemic.

Colder air moving in now is setting the stage for some winter precipitation by Tuesday morning It will warm up Tuesday afternoon and evening ending any serious icing concerns There is a chance of some snow later in the week, but it is still a bit suspect KANSAS CITY'S MOST ACCURATE FORECAST Monday: Partly cloudy and cold.

Tiësto - The Business is the song of the day and this is the OPEN THREAD for right now.

Can one get any lower?

Oh yes, I guess one can; Baldwin called his daughter filthy names that was played on the news.

His impression of Trump on SNL was lame and boring.

Holy shit, better run to the grocery store and stock up on provisions.

Only reason the Post came out and called Trump out is he's fucking up the races in Georgia with all his bullshit conspiracy theories. It really is a prime example of 'Everything Trump touches dies'.

But while we're here, make sure to go send a few bucks into the Trump stop the steal fund, you fucking schnooks.

Gee. I wonder why it's hard to find people who will put up with brats, obnoxious parents, and school administrators who couldn't find their butts with both hands. There simply aren't that many masochists out there.


I can't believe anyone can't see the hypocrisy in the NFL playing during the pandemic while everyone else lost their job and business. Then you morons put on a shirt praising the scum bag chiefs. You people are no better than the middle eastern terrorists. Traitors!

^^^^How about you just shutting the fuck up?

The Chiefs will not be the "Super Bowl Heros" this year and I as many said you overpaid that asshole Mickeyhomes and will now see what it got you. Boring barely winning games is all. A number of quarterbacks threw for more yardage yesterday making half as much as that loser Mickeyhomes did. Fame went to his head and out of his arm just like I said it would.

NOBODY BUT YOU CARES

^^You do simp. You commented. If you didn't really care, you would've skipped it, but you do and did. Owned again dummy.

Unemployed gay momma's basement BLM imbecile libtard troll, is awake and active. Be prepared for amazing progressive stupidity. Remarks may include such terms as: CHUD, geezer, racisssst, MAGAT, Maude, Trumptard and weird. Often starts with two or more silly ^^ marks. It is strongly recommended one should ignore what he/she/it posts as it may cause permanent brain damage.

I wonder if SNL will do a cold opening with a brown haired cast member in an orange jumpsuit looking like Lori Loughlin singing a satire song to the tune of "I'll be home for Christmas" but with lyrics of "I'll be home for New Years Maybe as a probie. Please have snow and alcohol..." And end with "Sponsored by The Hallmark Channel". Now that is some funny shit!