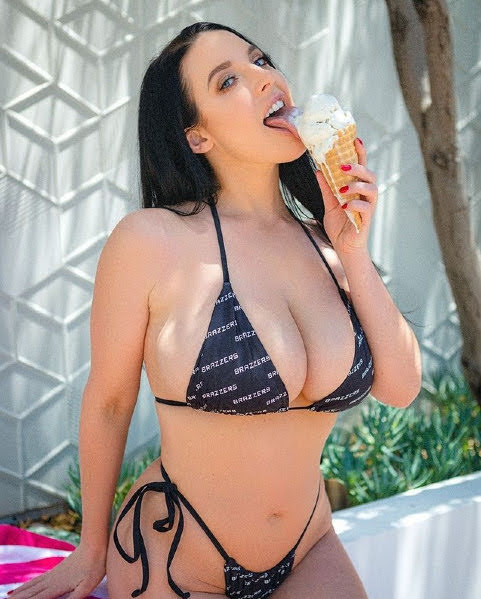 Right now we celebrate a somewhat balmy December day by checking hottie Angela doing a bit of pr0n promo via mainstream social media as we share some foodie news whilst checking out community news, pop culture and top headlines.

Torchy's Tacos is coming to Olathe.The Austin, Texas-based craft casual taco brand known for its creative take on street tacos, addictive Green Chile Queso and fresh-made margaritas has signed a lease to bring its third Kansas location to Olathe. The restaurant will be located at 11919 S.

The Kansas City Ballet's first performance of "The Nutcracker" was in 1972. And for many families across the metro, the production is a holiday tradition. But for the first time in nearly 50 years a pandemic has put the show on hold.

Missouri plans to vaccinate priority groups by end of year

COLUMBIA, Mo. (AP) - Missouri's health director on Friday said the state should be able to vaccinate all hospital workers, nursing home staff and nursing home residents against COVID-19 by the end of the year.

President-elect Joe Biden's margin over President Donald Trump in the nationwide popular vote is now more than 7 million votes and may continue to grow as several states continue counting votes.

President-elect Joe Biden said Thursday that he fractured his foot after tripping on a bath mat following a shower over the weekend and while chasing his dog Major, explaining the incident and saying it isn't a "very exciting story." Biden, during an interview with CNN on Thursday, explained the incident over the weekend that resulted in a hairline fracture.


Pushing Back Against Prez

subscribe to The NPR Politics Podcast podcast Republicans at the national level have mostly stayed quiet during President Trump's month-long baseless crusade against November's election results. But at the state and county level it's been a different story.

The U.S. House passed a bill that prohibits people from owning big cats like lions and tigers, after Netflix released the documentary series "Tiger King." The chamber voted 272-114 to pass the measure, which also makes it illegal for exhibitors to allow people to touch cubs, late Thursday.

From the pink tree in Swope Park to the giant clothes iron in Kansas City, Kansas, Anne Kniggendorf's new book Secret Kansas City: A guide to the Weird, Wonderful and Obscure, takes readers from one local landmark to the next.

This week, Missouri Gov. Mike Parson received a letter from the Missouri Entertainment Alliance (MEA) requesting funding to save the state's struggling independent live-entertainment industry. In the three-page letter delivered to the governor and members of the MO CARES Act Working Group, MEA requests $11.25 million in funds to be provided through the Coronavirus Aid, Relief, and Economic Security Act (CARES).

Doesn't everyone chase their dog as they are getting out of the shower?

if that's your evidence of voter fraud. You've got none.

I’d screw that Angela real deep and hard with my big cock.

No, that's yet more evidence of Biden's debility.

Again, we know English is tough for you.

biden was fucking that dog and fell, while his son watched and jacked off on CCP meth. Just warming up for the big party.

anyone know where that big iron is at ?

I feel sorry for president elect biden, has a broken foot right now. that damn rescue dog - too many those dogs pushed on elderly people. he doesn't have time to train a new dog right now he has to get ready be president

As least Trump doesn't have to worry, no self-respecting dog would come hear him - that's why only Ivana, Marla and Melania had kids by him, no self-respect. The other four, maybe five women he knocked up all had abortions, and he paid for them.

^ So our next President, while naked, chases his dog from the shower and breaks his foot.

You read it here first:

Biden broke his foot as doctors extracted it from the back of his mouth.

Concert organizers don't need to beg. Just declare a peaceful musical protest. The media will praise the organizers and ignore the lack of Covid worship.

Xi was excited about chasing dogs