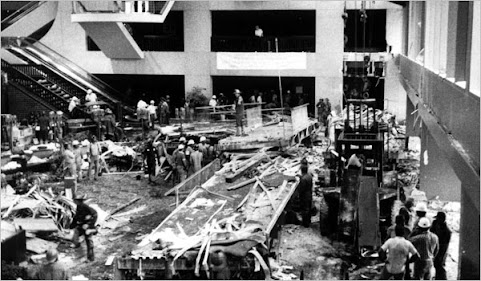 One of the BEST & BRIGHTEST TKC READERS informs us that beloved local and legendary community leader Sol Koenigsberg recently passed away.

"In 1968 he assumed the executive directorship of the Jewish Federation of Greater Kansas City. He served in that position until his retirement as Executive Director Emeritus in 1989. He wrote a book about his Kansas City experience entitled “Challenges and Growth” where he wrote about his successes in helping the Jewish community achieve more sophistication as symbolized by yearly increased giving to the Federation annual campaign, promoting the Jewish Community Foundation and coordinating the building of the Jewish Community Campus, Federation project. Sol was named as one of the living legends of the community by the Kansas City Jewish Chronical."

Accordingly, here's important testimony that remembers a defining moment for Kansas City amid a historic disaster . . .

Survivors of one of the deadliest structural collapses in U.S. history are still fighting to raise funds for a memorial 32 years after the Hyatt Regency Hotel skywalk collapse. On July 17, 1981, 114 people died and 216 more were injured. For those who survived the collapse, the sights and sounds of that night are very vivid.