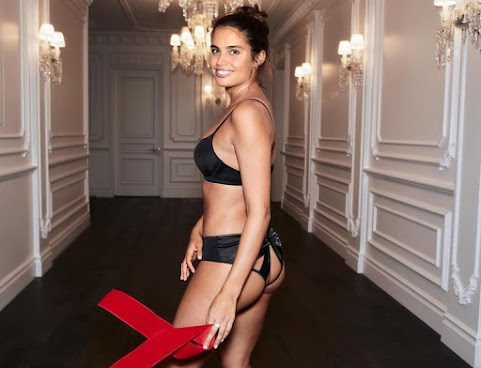 Right now we notice hottie Sara and this cheeky bit of promo advocacy for our favorite panty juggernaut as we check pop culture, community news and top headlines.

Missouri health officials say they anticipate that long-term care facility residents and staff, and health care workers could get the vaccine by the end of January. Kansas City hospitals are seeking more of an antibody therapy in hopes of keeping COVID-19 patients out of their dwindling number of hospital beds.

KANSAS CITY, Mo - In a strongly worded statement on Thursday, the CEO and president of AMC Entertainment reacted strongly to Warner Brothers' plans to stream all new movie titles on HBO Max, in addition to theatrical releases, beginning in 2021. "Clearly, Warner Media intends to sacrifice a considerable portion of the profitability of its [...]

It's officially the holiday season in Kansas City. December's first weekend will feature a few opportunities to (safely) meet Santa Claus, paint the perfect holiday portrait, or drive through a dazzling holiday light display. 3 - 7 p.m. How about a personalized video call with the big man himself?

Some Trump allies claim the president would help other Republicans, too, by declaring his candidacy almost immediately after leaving office, suggesting it would save the party a contentious primary between Trump-hostile characters and those vying to claim his ultra-loyal base.

Biden: Trump attending inauguration is 'of consequence' to the country

President-elect Joe Biden said on Thursday that it is not important to him personally if President Trump attends his inauguration next month, but added that it would be important for the country to bear witness to a peaceful transfer of power.&nbs

Ryan Reynolds made a Match ad that unites Taylor Swift's Love Story, Satan and the year 2020

If you were tasked with finding the perfect match for Satan, what traits would you look for in a potential mate? Dark, difficult and demonic might be a good start. Sounds a lot like... the year 2020.

With an eye toward diversity and inclusion, the first public art selection panel for the Kansas City International Airport single terminal project has been chosen by the Municipal Art Commission (MAC).

Impact doesn't stop with the end of a ScaleUP! Kansas City cohort, said Jill Hathaway, and the program certainly isn't pausing amid the ongoing pandemic, which has thrown many entrepreneurs for a loop. ScaleUP!

Carly Rae Jepsen - It’s Not Christmas Till Somebody Cries is the song of the day and this is the OPEN THREAD for right now. Keep going for more local links . . .

Missouri is on pace to have more deaths from gun violence this year than ever before, especially in St. Louis, Kansas City and other cities that are breaking homicide records. Public health experts say gun violence is an epidemic that can be treated by addressing issues such as poverty, racial inequality and housing insecurity.

Since Jason Kander narrowly lost his bid for one of Missouri's U.S. Senate seats in 2016, he's focused on fighting voter suppression and helping veterans in need. Kander has been very public with his own PTSD and depression, which caused him to drop out of the 2019 Kansas City mayoral race.

The National WWI Museum and Memorial received $655,000 worth of donations Wednesday to help it digitize its entire collection. The William T. Kemper Foundation donated $500,000, and the National Endowment for the Humanities contributed $155,000, according to a release about the donations. "We would like to thank the William T.

A pandemic-founded program has students leading the charge as a new generation of founders and venture capitalists rises together against the backdrop of an evolving and accessible Kansas City, Maggie Kenefake said. "With underrepresented founders, it's really shocking," said Kenefake, managing director of Kansas City University Venture Fund (KCUVF) and venture partner at Royal Street Ventures.

KU says fans will be allowed at upcoming sporting events

YOU ARE WATCHING KMBC 9 NEWS. KELLY: WE'RE FACING A POSSIBLE COVID-19 SURGE BECAUSE OF THANKSGIVING. GOOD AFTERNOON. I'M KELLY ECKERMAN. THOSE OF THE WORDS COMING FROM THE HEAD OF THE MISSOURI HOSPITAL ASSOCIATION. KMBC 9'S MICHAEL MAHONEY SAYS HE THINKS HE HAS THE NUMBERS TO BACK THAT UP.

Williams announced on Thursday that Missouri will get an additional 64,000 from Pfizer and 105,000 from Moderna, which are scheduled to arrive around Dec. 21 JEFFERSON CITY, Mo. - Missouri will be getting more COVID-19 vaccines later in December, Missouri health department Director Randall Williams announced during a press conference with Governor Mike Parson.

TOPEKA, Kan. - A hearing is set for Feb. 4 to determine whether defeated Rep. Steve Watkins will face a trial on charges of felony election fraud and other crimes. The Republican congressman for eastern Kansas had initially faced his first appearance in state district court Thursday in Topeka on three felony charges arising from his listing a postal box at a UPS Inc.

2021 legislation: A look at what's on deck for the Missouri Senate next year

The pre-filing process, annually set for the beginning of December, gives lawmakers a chance to set the stage for the upcoming session. In the Senate, rules dictate bills and resolutions are to be introduced based on the seniority of the senator who filed the legislation, with a limit of three bills or resolutions per rotation on the list.

The Kansas National Guard conducted 28,000 COVID-19 tests and distributed almost 40,000 cases of protective masks, gloves and gowns. Guardsmen have also packaged a staggering 8 million meals. But even as hospitals fill with COVID-19 patients and deaths mount, the guard's pandemic mission is going the other direction. Col.

Saturday, the KC Ice Artist will host a live demonstration at the Holidays in Crestwood fundraiser benefiting Child Protection Center. The fundraiser run Thursday through Saturday at the shopping district at 55th Street and Brookside Boulevard in Kansas City, Missouri.

KANAS CITY, Mo. - It's been a challenging time for everyone, especially students. Educators say remote learning is harming some students. One local group is hoping to change this. "Kids are disengaging in the education system all the time for a variety of reasons," United Inner City Services CEO Deidre Anderson said.

KANSAS CITY, Mo. - The local Court Appointed Special Advocates, or CASA, has seen the number of child abuse cases it handles double in Johnson and Wyandotte counties since April. With more children returning to virtual learning, CASA fears those numbers will continue to rise.

But that ass though.

First thing, the Municipal Arts Commission's panel needs to be rejected, and a new group impaneled consisting of people who RESIDE IN KABSAS CITY, MISSOURI!

^^^^ Okay screwed up, it's KANSAS CITY!
Still doesn't invalidate my point, KCMO residents are the ones on the hook for this disaster, and only they should be have a say in it.

Willing to make an exception for Tracy Thomas if she agrees to flee the "Snake Pit" of Shawnee and move to KCMO.

I would like to suggest that Adam Aron, CEO of AMC, watch a YouTube video on the What Culture channel titled "8 Times Audiences Were Blamed For Movies That Failed".

Good points 5:40am.
But these days the most important criteria are "diversity and inclusion".
So start with the letter "A" in the alphabet and start listing all the identifiable groups of "marginalized" individuals and search far and wide for some "representative" of that group.
Arts experience, education, or training NOT required.
What's important is what you are, not what you know or even accomplish.
The results of this at the airport will speak for themselves.

Having dumped that loser Jared, Ivanka and her new squeeze set out for Daddy's 87th Rally of the year 2021!

Ahhhh, poor baby Trump doesn't want to attend the inauguration because his feefees are hurt. What happened to the rough and tumble fuck your feelings Trump party? Pussies.

The Republican party is officially dead. They're eating their own as we speak. Lie down with dogs and you get fleas I guess.

^^^^ Nah, lie down with dogs and you get Barrs... and McConnels... and Grahams... and a bad case of the Durham nothingburgers.

Nah. Legitimizing a stolen election in favor of an Alzheimer's patient and his Jamaican hooker sidekick just isn't the thing to do. ;)

Warning!! Unemployed basement imbecile is active. Be prepared for amazing stupidity. Remarks may include such terms as: CHUD, geezer, MAGAT, Trumptard and weird. Often starts with two or more silly ^^ marks. It is strongly recommended one should ignore what he/she/it posts as it may cause brain damage.

^^and yet you can't ignore it as evidenced by your reply. I own you. Weird.

9:17 - your guy lost fair and square. move on with life loser. quit donating to Trump's grift and spend that money on yourself. maybe buy some counseling or something ya fucking kook.

Nobody lost yet dummy, keep dreaming that China joe and his hoe won, Trump will be re-elected come January and you will cry like a little girl..... again!

False. Election is still not over due to huge and obvious fraud.

^^and yet it is over. 1-42 in the courts means it's over. Just because you say there's huge and obvious fraud doesn't work in America. If it's so obvious how come the "elite strike team" han't been able to show it? Sorry Trumptard time to drink the kool-aid. Weird.

So that’s how rapey joe broke his ankle! Hahahahaha!

By the way, you won’t know who’s president until the super spreader event on Jan 20 so....

^^and yet 81 million Americans already know who the president is. Weird.