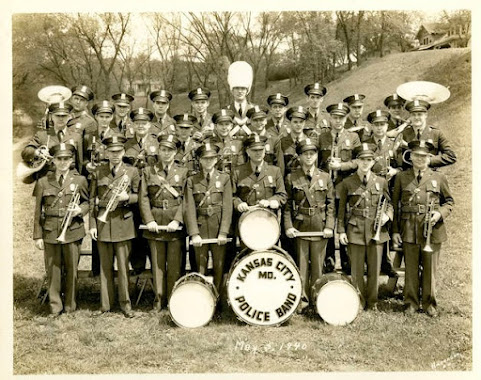 This old school image of the KCPD band offers a fitting into to a collection of local crime news.

A high or low note depending on the reader's perspective. . .

In a statement, Lucas said the resolution continues a discussion began by The Star and KSHB-TV, which also stopped airing many mugshots. That question, he said, is: “When is sharing mugshots necessary?” “We believe, less often than is currently practiced,” Lucas said. “Our view remains that releasing mugshots of individuals who are already in police custody does not actually assist with policing or crime-solving, and airing these mugshots normalizes seeing Black men on television labeled as criminals — perpetuating harmful stereotypes that have held Black and brown members of our community back for generations.”

“These stereotypes only work to feed the cycle of crime, not break it.”

These are nice sentiments and we're not going to post the mug shot that almost ruined the mayor's career. However . . .

IF THIS IS THE ANSWER TO CURBING THE HISTORIC HOMICIDE COUNT IN KANSAS CITY, IT'S NOT GONNA WORK!!!

In fact, the mayor might notice that when the mugshot is really captivating, local media almost NEVER opt out and often betray their own rules.

Nevertheless, we use this not-so-fun fact as the starting point into a medley more local crime news after the jump . . .

With rolled back odometers more common, experts offer tips to avoid getting scammed

KANSAS CITY, Mo. - It's a federal crime to sell a car with a rolled back odometer, but it happens every day, according to a national database compiled by CARFAX. "When we look at CARFAX data, we estimate that 1.8 million cars on the road today have an odometer roll back, and that's up about [...]

Kansas City Mayor Quinton Lucas filed legislation Thursday asking police not to publish suspects' mugshots unless they might help solve a crime or locate a fugitive. But the Kansas City Police Department says it already doesn't do that.

KANSAS CITY, Mo. - A Kansas City man accused in the beating death of a woman five years ago was found guilty of murder, Jackson County prosecutors said Thursday. A judge on Wednesday found Kevin O. Hurley, 62, guilty of second-degree murder in connection with the death of 42-year-old Brandy K.

FAIRWAY, KS (KCTV) -- Sixteen years ago, the tiny town of Skidmore became the focal point of nationwide news for a haunting crime. An 8-month pregnant mother was strangled and her fetus was cut out of her stomach. Bobbie Jo Stinnett's mother found her in a pool of blood.

The federal government must pay some landowners along the lower Missouri River for flooding damage caused by changes the Army Corps of Engineers made to the river to protect endangered species, a judge has ruled.The ruling this week by Senior Judge Nancy Firestone, with the U.S.

KANSAS CITY, Mo. - A rash of illegal street racing and sideshows have exploded in parts of Kansas City. Noise, property damage and some violence have come with it. The Kansas City Police Department said it's starting to see more street racing in the downtown area.

“Our view remains that releasing mugshots of individuals who are already in police custody does not actually assist with policing or crime-solving, and airing these mugshots normalizes seeing Black men on television labeled as criminals — perpetuating harmful stereotypes that have held Black and brown members of our community back for generations.”

Democrat politicians are in fear the law abiding black people, whom, weary of the crime in the neighborhoods they live in, voting for more reasonable (Read - Conservative) politicians in hopes of Ordo Ob Chao.

Crime is NOT caused, it is committed.

This is, "The Show Me State" after all.

MR MAYOR YOUR SOCIAL JUSTICE TACK IS ALL WRONG. WHEN THE MSM PUBLISHES A CRIMINAL PHOTO THEY ARE REPORTING THE FACTS. THIS IS PUBLIC RECORD NOT A PROMOTION OF A STEREOTYPE. WHEN THE TRUTH AND FACTS GET IN THE WAY IT'S RACISM.
INSTEAD OF TRYING TO HANDLE THE INDIVIDUAL WRONG, YOU BLAME THE SYSTEM AND DO NOTHING TO HANDLE THE PROBLEM. THE HECK WITH PERSONAL RESPONSIBILITY,ADHERING TO THE RULE OF LAW. IT'S ALWAYS SOMEONE ELSE'S FAULT.

You got one thing right mayor mcdumbo, the thug life is the problem, it’s not posting pictures of criminals, what’s next, you gonna demand to cut out the life stories and pictures of the victims too?

At this point all you’re doing is grasping at straws because you still refuse to confront the murderous black community who are behind 95% of killa shittys problems, until you do, just shut the fuck up.

Get lost, dickhead. You don't even live in the city. Take your putrid racial views (along with your Trumplove) and die already, voteflake.

More and more those that have failed society as leaders are simply pretending that the problems don't exist. Everything from dumbed down school work to admissions to colleges. Mr Mayor work on solutions, not hiding the problems.

We need to shoot the whiny libs too.

Maybe Mayor McDrinkerson could axe them to stop breaking the law?

Shoot Q and mount his head on Jackson's statue.

Keep the mugshots. Lose the mayor.

F--k Mayor Lickass if ya don't want your mug shot seen don't commit a crime. That should be the message from our mayor. But our mayor is a butt hurt Karen member of BLM.

Great idea Quinton Lickass! If you don't show mugshots nobody will ever figure out that people named DeShawn, Tyrone, Tanene, Tawnisha or Laquisha are black!

If you don't want mugshots then do something about the crime you fuckhead!

Geez if only blacks would stop committing so much crime it would solve alot of sjw issues, such as. Mugshots on TV, bullet proof glass in every black neighborhood store, inner city food droughts, high black incarceration rates, poor black school performance and on and on.

Just can't seem to figure out the problem.

Thanks for turning KC into Honky Lips, MO Q!

By the way, fuck the NFL and FUCK the Chiefs.

The investigation also found that the shooting began after the pursuing officer tased Reed.

“He actually tases him at the same time Mr. Reed is actually starting to pull his firearm out,” Herron said.

“Mr. Reed basically goes down on his stomach and then he turns, basically in that same position onto his, basically onto his buttocks and he follows and it appears he follows Officer Mercer as he’s moving,” Herron concluded.

The investigation also found still shots showing Reed stealing the gun from a pawn shop in Texas, and text messages in which Reed detailed his involvement in two drive-by shootings.

The officer who shot Reed was not charged with any crime.

This isn’t the first time that the NFL has paid tribute to a dangerous criminal.

THIS IS WHY IT WILL NEVER END. LIARS.

And Professor McDrinkerson gifts us all with another tone-deaf gem.

The offensive thing about it isn't even that this peanut-headed stooge chooses woke politics over practical concerns during a crime wave he promised to stop. You're concerned about the mugshots? How about the murders, professor?

No, the offensive thing is that this isn't even a statement of conviction. It's just vote insurance. He knows who he has to pander to.

FUCK YOU PUSSY GROW A PAIR AND STOP CRYING

The excuses posted at 6:50 were actually written by Quinton Lickass. He just doesn't have the guts to post them with his name attached to it.

being on a ship lost at sea does not cause crime.


The only reason Lucas wants to stop showing mug shots is because they are mostly black people and he doesn't take kindly to that. He thinks that's racist even though it's true it's mostly black people. Kinda makes him look bad but he's a criminal too so......

yes,7:24 because it's the bitches that don't put out cause crime.

Q: Something we already know. The goal is to get these thugs off the street. Mugshots should be on a 24/7 website for all of KC to view.

It makes no sense to show the mugshots of the incarcerated...

Are you that fucking stupid? Maybe, you see one and you realize hey that is the POS that stole my car, raped, or burglarized my house.

^^ subscribe to the printed edition of busted Detective Barbrady.

the next time your parole officer asks if you got a job again, ask them if they updated their fucking form questions for the internet age.


ACTUAL QUOTE from Jesse Jackson:
“There is nothing more painful to me, at this stage in my life, than to walk down the street and hear footsteps ….. then turn around, and see somebody WHITE ..… and feel just - ABSOLUTELY RELIEVED!!!”


Chuck, is this the "royal our", somewhat like the "royal we", or do you have a mouse in your pocket, who agrees with you?

Heart of Darkness
Heart of Darkness is a novella by Polish-English novelist Joseph Conrad about a narrated voyage up the Congo River into the Congo Free State in the Heart of Africa. Charles Marlow, the narrator, tells his story to friends aboard a boat anchored on the River Thames.Wikipedia

Today, he could have simply written about our local CONGO spear-chuckers, in a boat anchored in the Missouri River.

EU has 'the right to be forgotten' as pertains to google/internet. The US 'justice' system does not.

TOP PHOTO -- HANG OUT WITH ALL THE BOYS

When candidate Quinton signed up to do a KCPD "ride along", he showed up in leather chaps and singing "YMCA"!!!

1) DUI
2) When local media (e.g., KSHB's Steven Dial) incorrectly described Lucas as a KU Law Professor, he never corrected them. Lucas told the original lie, and then allowed it to perpetuate hundreds of times without setting them straight, that's what a habitual liar/con man does to inflate his importance.

Internet site like busted.com and arrests.org should be banned. busted.com and other are exploitive and charge fees for removal, only to have new sites pop back up. arrests.org claims to be for public safety, and is the seed site for all other exploitive sites, while they allow folks to tag mugshots for entertainment:
Beat Up
Celebrity
Handicap
Grills
Hair
Hunks
Hotties
Scary
Tatted up
Transgender
Wino
WTF

Many states do not allow upload of mugshots to these sites, all states should follow their lead or place a time limit for allowing the upload.

There are plenty of background check sites that can be used by concerned citizens instead.

Seems like he ought to be solving crimes and preventing crimes.
That would go a long ways to preventing mugshots.

Now we know he wastes his time avoiding the elephant in the room.

Mayor 10-10-10 is watching citizens move to Florida to avoid taxes and masking and illegal restaurant closures by his Nazi-like enforcement.

Because people in every one of these cases have free will. Mind blown?

Is it a stereotype if it's true?