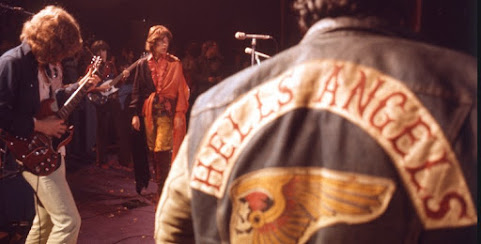 For those with a bit of time on Saturday, we share a tragic bit of pop culture history.

The anniversary of this musical nightmare was recently commemorated and it remains a deadly reminder from the past that artists can often get in over their head when aligning themselves with overwhelming cultural shifts. On the bright side, The Stones recovered and Mick Jagger is still shaking his booty and belting out the classic songs well into his 70s.

Altamont: After the Bleeding Stopped

"It’s not as if the event itself, the disastrous Rolling Stones free concert at California’s Altamont Speedway was not extensively covered in all its painful detail at the time. It was even documented in the iconic film Gimme Shelter.  Multiple cameras captured the chaos on and in front of the stage as Hells Angels “security guards” scuffled with band members and charged into the crowd to pummel anyone they perceived was threatening them or was otherwise “out of line” with pool cues.  A man was stabbed to death by a trio of Angels during the Rolling Stones’ climactic performance.  Altamont immediately became the media counterpoint to Woodstock’s “3 Days of Peace and Music” held four months earlier near New York City."

Special thanks to a local music scribe who shared the local angle in a public post and provides even more great detail for music history buffs.

The problems started when the Rolling Stones fools hired the tucking Hells Angels as security guards for the event.

Need to hire them to deal with antifa assholes.

Need to hire them to deal with stupid selfish "we won but can't prove shit" Republicans.

Even a third of Demoncraps say that Biden won only because the election was rigged. What does that tell you, moron?

Need them for BLM , Antifa and all other Terrorist organization that Rainbow Warriors like 12:32 Pm supports. Aka- when you get a 1 st prize for Fudge packing. Grow some Nuts or take them away from the skirt beside you.

Warning!! Unemployed basement imbecile @ 4:15 is active. Be prepared for amazing stupidity. Remarks may include such terms as: CHUD, geezer, MAGAT, Trumptard and weird. Often starts with two or more silly ^^ marks. It is strongly recommended one should ignore what he/she/it posts as it may cause brain damage.

^^ Sounds like you are a jealous little bitch. Having no audience, appeal or hook. Maybe grow some Nuts like they suggested. And are you sure that you are not the basement, maga and geezer description implied? Weird