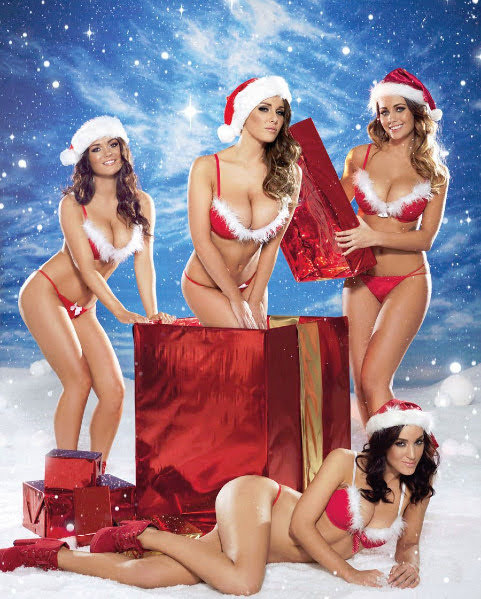 The era of the "lad mag" is now in the dustbin of history but, still, we're inspired to revisit Christmas past whilst checking pop culture, community news and top headlines one more time tonight.

KANSAS CITY, Mo. - Even though everyone knows Santa is coming, the cold coming before him is catching some people in Kansas City off-guard. A lot of people plan out and have high hopes for their Christmas Eve outfit. That's true even in a year like this one that might not have a bunch of [...]

On a cold December morning in Kansas City, a man in a red hat sits next to a crackling fireplace and reflects."Well, obviously, 2020 has been a difficult year for everyone," the man said.He's known only as Secret Santa, an anonymous business man who has given away hundreds of thousands of dollars to people in Kansas City and across the country.Even in this year of uncertainty, it was never a question for Secret Santa, spreading kindness is more important now than ever.

The Community Investment Trust is a way for people to become property owners without breaking the bank. For as little as $10 a month, people who live in Kansas City's historic northeast neighborhood can be a part of this program.

The nudge from Thornberry comes ahead of a Monday override vote that Republicans could make or break. The vote will test whether GOP members are willing to defy Trump en masse, a scenario Thornberry hinted at. "Your decision should be based upon the oath we all took, which was to the Constitution rather than any person or organization," he said.

Dark days: Experts fear the holidays will fuel the deadly COVID-19 outbreak across the US

Hard-hit California eclipsed 2 million coronavirus cases on Christmas Eve as the U.S. headed into a holiday season of travel and family gatherings that threaten to fuel the deadly outbreak across the nation. Despite warnings from public health experts to stay home, over 1.19 million travelers passed through U.S.

The discovery comes after similar supercharged variants of the deadly virus were recorded in Britain and South Africa. ⚠️ Read our coronavirus live blog for the latest news & updates John Nkengasong, head of the Africa Centres for Disease Control and Prevention, revealed the existence of the new P681H strain today.

'We are struggling': A bleak Christmas for America's jobless

NEW YORK (AP) - Last Christmas, Shanita Matthews cooked up a feast for her family of three: Roast chicken, barbecue spareribs, spinach, macaroni and cheese. This year? They'll stick with tuna fish and crackers, among the few items she can afford at the supermarket.

Kevin Spacey posted a Christmas-themed YouTube video, marking the third year in a row that he has shared clips to his channel. This year's video, titled "1-800 XMAS," was a more somber affair than past years, offering compassion to people struggling over the holiday season.

For 11 months out of the year, it's known as Terrace Place, but in December - everything changes. The neighborhood off of 131st Place and Antioch Road transforms into Christmas Place, a holiday tradition that's 28 years strong.

'All we really care about': Partnership is helping food insecure Veteran families

FROM -- PRAISE FROM TEACHERS UNIONS. A PARTNERSHIP IS SERVING THOSE WHO HAVE SERVED US. OPERATION RESUPPLY IS HELPING MILITARY FAMILIES THAT ARE FOOD INSECURE. OUR ROB HUGHES EXPLAINS HOW YOU CAN HELP THE PROGRAM CONTINU WE HAVE BEEN VERY FORTUNA AND HELPED MORE VETERANS OUT THAN WE THOUGHT POSSIBLE.

A few snowflakes are possible this evening

A few snowflakes have been reported this evening. A bigger storm is showing up for next week It will be sunny and cold on Christmas The storm New Year's week looks pretty wet with rain, sleet, freezing rain, and snow in our area KANSAS CITY'S MOST ACCURATE FORECAST Tonight: Cloudy with a few evening snow flurries possible, then it will clear overnight.

I suppose it could be worse.

^^ It's an attempt at rehabilitation of his shitty reputation of having sex with jailbait boys.